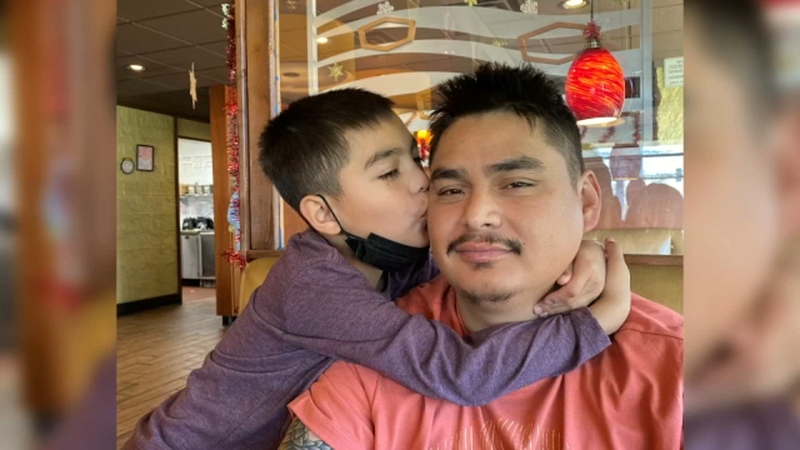 DINUBA, Calif. (KFSN) -- The Christmas Tree is still in place, but the holiday spirit is gone for Jose Aparicio and his family.

His young son, Jonathan Aparicio died on Thursday after a crash just north of Dinuba.

The CHP says around 4:30 am, Jose's ex-wife, 28-year-old Sabrina Elizondo, was driving under the influence of alcohol with her son in the car when she blew past the stop sign at the intersection of Floral and Porter.

The Honda Accord slammed into a large power pole, killing Johnny.

Authorities say he was in the backseat, but they are unsure if he was in a car seat.

When Aparicio heard the news, he drove four hours from his job in Santa Rosa and he says Adventist health in Reedley was able to keep Johnny here so that he can see his son one last time.

"Luckily, they waited for me," Jose said. "It was a four-and-a-half-hour drive to go, so you can only imagine how bad it was, how long it was."

On Friday, his family including his girlfriend, remembered Johnny as a happy, friendly little boy.

Authorities arrested Johnny's mother before she was taken to Community Regional Medical Center with major injuries.

She is expected to face felony DUI charges.

Now, Johnny's father says he is sharing his heartache in hopes others won't make a deadly decision this New Year's Eve.

"Have fun, but don't drink and drive," he said. "There are consequences to that. Unfortunately, we paid the ultimate price right here."

The Kings Canyon Unified School District said classes don't resume until January 10, but it will have emotional support professionals at the campus next week, January 3 through the 6.

A GoFundMe has been started to help pay for funeral expenses.
Report a correction or typo
Related topics:
dinubadui crash
Copyright © 2022 KFSN-TV. All Rights Reserved.
TOP STORIES
Heavy law enforcement activity near Reedley, roadways closed off
78,000 pounds of infant formula arrives in US
Fresno police catch suspect after he falls out of Save Mart ceiling
ABC30 editor spotted suspect in Fresno Save Mart, alerted employees
Something strange is happening with our universe: NASA
Woman badly burned after Hanford home catches fire
Wisconsin couple kills bear that attacked them in their home
Show More
A new billionaire has been minted nearly every day during the pandemic
Fate of 2,500 Ukrainian POWs from steel plant stirs concern
Man drowns in Lost Lake in Fresno County
Hanford police officer, K9 hospitalized after exposure to fentanyl
Merced Co. offers free culinary classes for students of all abilities
More TOP STORIES News