KFSN
By Shayla Girardin
FRESNO, Calif. (KFSN) -- At Fresno State, faculty and students are hard at work to keep the native tongue of one of the Valley's treasured tribes from going extinct.

It was a partnership that started over ten years ago to save the Chukchansi Indians' native language.

"They didn't have things like classes, textbooks, dictionary, grammar," explained Chris Golston, professor of linguistics. "If you're going to teach Spanish, you can pick up a Spanish book off the shelf. They didn't have any of that."

With a limited number of native speakers left, the tribe partnered with the Fresno State Linguistics Department to keep their language alive.

"They needed an alphabet. They didn't have an alphabet, a writing system for their language, so I did that in 2008," Golston said.

"No one had ever written down Chukchansi," said former Fresno State student, Ryan Rhodes. "There's a couple of stories or something, but there's no grammar, so if the last three speakers disappear, we'll never know how it worked."

Over the past ten years, students and staff have been busy writing an alphabet, dictionary, and establishing grammar for the language, even receiving a million-dollar grant to continue their work.

Finally, they were able to translate nearly 30 classic Chuckchansi tales from English back into the native language, giving them a piece of heritage to hold.

"Something that will be around so when there's no more speakers the language doesn't disappear, so dictionary, grammar, stories, language and all that kind of stuff," Rhodes added.

Now the students and faculty are heading back to the classrooms, and this upcoming semester, they'll teach the language to students at Coarsegold Middle School.
Report a correction or typo
Related topics:
educationfresno stateeducationnative american
Copyright © 2020 KFSN-TV. All Rights Reserved.
EDUCATION 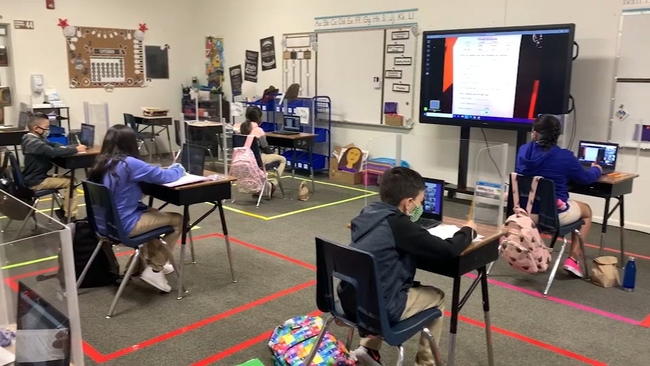