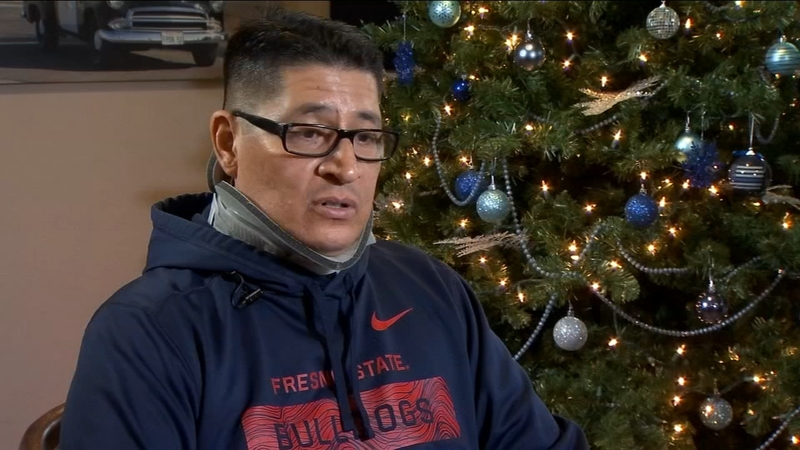 FRESNO, Calif. (KFSN) -- Eloy Escareno has no recollection of that Sunday in October at all. His memory stops the night before, of a great night of Bulldogs football with family.

Sunday morning he woke up and headed to church. His wife - 11-year-old son and young niece and nephew were in the car. But they never made it to their Easton congregation.

He remembers waking up around a week later.

WItnesses said a Toyota Camry ran a red light at Highway 180 and Bethel and struck the Escarenos- the impact was directly on Eloy's drivers side.

"It hit me, it pushed me off to my right. I hit my wife unfortunately with my right side of the head on her left side of her head," he said.

Their colliding heads caused his wife's traumatic brain injury. The results have left Maribel Escareno with the most devastating injuries and undergoing intense rehab - to date she remains hospitalized.

Eloy has only heard details about the crash through reports from the California Highway Patrol. His son Ethan also filled in the gaps. It appears the veteran police officer knew his family was in danger.

"From what my son told me, was I guess I did see the car coming and I put my arm out to hold my wife back," Eloy said.

Eloy and his wife were left unconscious. Ethan wasn't seriously hurt and immediately rushed to get help.

One CHP officer told Eloy he regained consciousness briefly and gave a thumbs up before he was airlifted to Community Regional Medical Center.

Getting the off-duty officer out of the SUV was difficult because his torso and lower body were lodged beneath the steering column. But doctors said that likely saved his life.

"He said it was probably a good thing the steering wheel was pushing into me, because it was actually putting pressure on my internal injuries, that slowed the bleeding and bought me some more time," Eloy said.

Nearly two months later, recovery has been painful. Therapy sessions to get stronger are grueling.

Eloy broke his back in several places, all of his ribs on his left side were broken, his spleen was removed, and he has several fractures along his spinal column. He also needed several blood transfusions.

Even now, he still can't drive because of muscle and ligament damage to his neck.

Sometimes he's overcome with emotion realizing just how close he and his wife came to a very different outcome.

"I just thank God that he allowed my wife and I to stay on this earth, obviously we still have work to do," he said.

Eloy has had many hardships and heartbreaks throughout his life and career.

His father Alejandro was beaten to death by gang members while walking down the street in southwest Fresno in 2000.

He was also the first officer to uncover the Wesson mass murder scene in 2004.

Despite what he's seen and endured, this challenge has given him perspective.

"It's helped me realize what's important in life. I know Christmas is coming up. It's not about gifts. It's about your family, your friends, and your faith and that's what's important to me," she said.