Byron Howard's life as an animator started at a young age. He says he was a doodler and liked cartoons.
KFSN
By Alicia Vitarelli 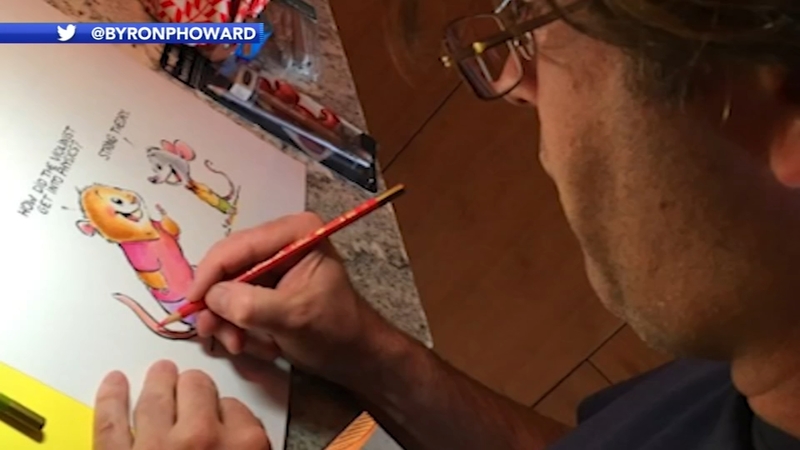 One of the directors, Byron Howard of Lansdowne, Pennsylvania, is preparing for what's expected to be a huge night for the animated feature.

"Encanto" has united families across the globe and that family theme will continue for the Howards come Sunday night. Howard's large Italian family will be watching The Oscars from their home in the Delaware Valley.

Howard's life as an animator started at a young age. He says he was a doodler and liked cartoons.

"I had one of those those flip movie things like Snoopy...and you kind of go frame by frame. And I just couldn't wrap my head around it. Someone drew every single one of those frames of animation," Howard said.

Fast forward from Byron Howard's doodling days at Ardmore Avenue Elementary School, and he has now made a 30-year career out of animation.

"If I could talk to my 10-year-old self, I'd say, 'Get ready for a fun ride. We have the best job in the world because we carry these films all the way from the very, very first blank page, the very first inkling of an idea to seeing moments like this,'" Howard said.

"Encanto" marks the fourth time Howard has directed a Walt Disney Animation Studios film. He is known for mega hits like "Tangled" and "Bolt," which earned him his first Oscar nomination. In 2017, he won for "Zootopia," which took home the award for Best Animated Feature Film.

"I heard the name and I was like, 'Okay, I'm checking to see my team mates as like, did they say us?' And then I'm trying not to stumble all the way up to the stage," Howard said while recalling that first win five years ago.

"Encanto" is a global smash hit that could bring him a second coveted Oscar.

"With Mirabel, especially, we had a very, very early pitch. This is like five years ago. That pitch included this idea of a young woman in a family of extraordinary people who was herself ordinary," said Howard.

"Encanto" has been sweeping this awards season. Next and final stop? The Oscars.

Howard says he's channeling the film with his fashion choices for the red carpet.

"We tried to go for sort of like a floral "Encanto" thing. I have a sort of floral-ish suit. We don't get dressed up as animators very often. We're usually in T-shirts. So when we get the chance, we've tried to go do it to the nines," said Howard.

"Encanto" is produced by Disney, the parent company of this station.

Check out the full list of nominations for the 2022 Oscars here.