Crews say the lack of wind helped their firefighting efforts and kept the flames from spreading widely.
KFSN
By Brittany Jacob 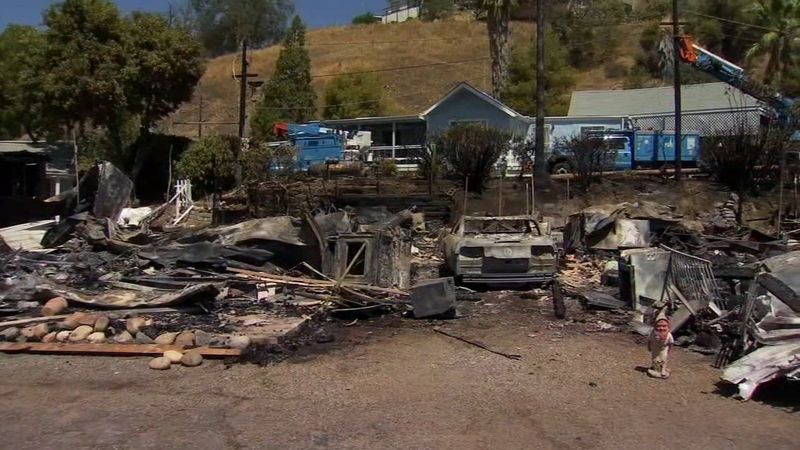 "Someone knocked on my door at 4:30 am, woke me, I walked out on the patio and there was a wall of flames and I thought, this is done, there is no way my house is going to survive this," says Brooke Traut.

Traut lives right behind the homes that are now reduced to ashes and rubble.

He says he grabbed clothes, important documents, and drove his car about 100 yards. He then tried to go back to get more items but ran out of time.

"You never think it's going to happen to you," he said. "My place is insured, but this is the first time I've had to run out of the house or evacuate."

CAL FIRE says they were concerned the blaze could spread into the surrounding dry brush, so they had a significant response from crews and used water from nearby Pine Flat lake.

They managed to keep the flames from reaching the vegetation - preventing a wildland fire.

Officials say there are several full-time residences in the mobile home park, and some are vacation homes.

Traut credits fire crews with putting up a big defense that protected his property and prevented more homes from being burned.

He also considers himself lucky, because he did see embers flying but not toward his home.

"We did have favorable winds last night or early this morning," says CAL FIRE Fresno District Battalion Chief Roger Baines. "The smoke column is going straight up in the air, which did us a huge favor. Had we had some wind on this in either direction, we probably would have had some issue with ember catching some spot fires into the grass."

PG&E was on site to secure active power lines that were running through the fire.

Plus, there were two large propane tanks that crews had to let burn and monitor.

Everyone who lives here has been accounted for sports and again, there were no injuries. The cause of the fire remains under investigation.