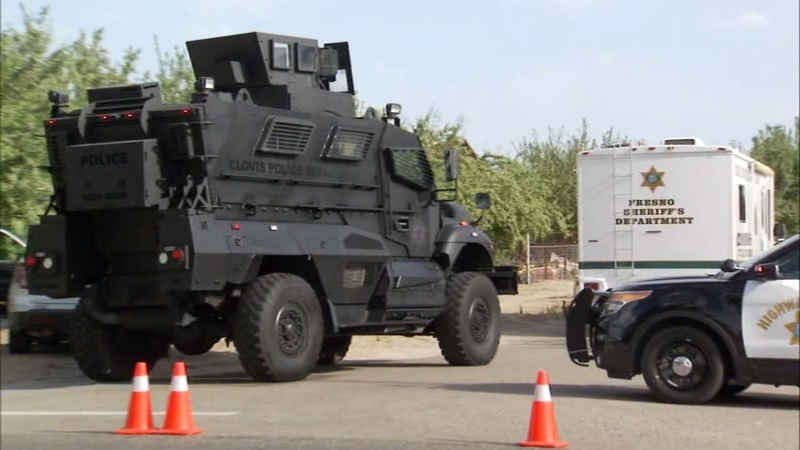 FRESNO, Calif. (KFSN) -- With government budgets tightening because of coronavirus, a lot of law enforcement agencies are looking back at an old program to help them gear up.

The 1033 program lets them get surplus military equipment for free.

"...Equipment such as robots. Robots for our bomb squad, robots for our SWAT team that are used to go out and surveil areas where we can do so remotely instead of arming personnel," says Fresno County Sheriff's Office Lt. John Reynolds.

Now, sheriff's deputies are relying on them - sometimes to help de-escalate dangerous situations.

In all, the sheriff's office has acquired almost $750,000 worth of military gear to use in its day-to-day operations.

And they're far from alone.

When Action News looked into police agencies armed with military gear in 2014, we found millions of dollars in equipment funneled to Central Valley law enforcement, including almost $2 million worth to the Merced County Sheriff's Office.

President Barack Obama put new restrictions on the 1033 program in 2015 - prohibiting police from getting grenade launchers and bayonets and limiting who could get riot gear and massive vehicles like MRAPs, which are designed to resist mines and protect soldiers from ambushes.
President Trump eliminated those restrictions in 2017.

Police critics say sending this type of equipment into an urban neighborhood is a show of dominance and a form of psychological terror.

"It's not just the threat of 'Will they actually use this military equipment to harm us?' but the way in which their militarization harms the mental health and emotional health of our community and actually manifests into physical disease as well," says Ashley Rojas with Fresno Barrios Unidos.

The 8 to Abolition movement lists demilitarizing police second on its 8-point plan, right behind defunding the police, and refining the 1033 program has gained some traction among Democrats on Capitol Hill.

When Action News examined the military gear at police agencies in 2014, Fresno police had not acquired anything from the military in more than a decade.

But he pointed to several situations where MRAPs saved the lives of officers.