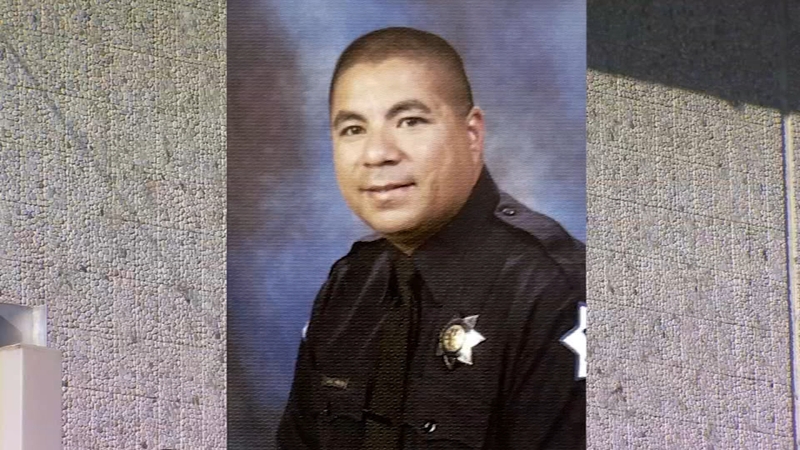 FRESNO, Calif. (KFSN) -- The Fresno Police Department is mourning the loss of a fellow officer.

Officer Angel De La Fuente, a veteran of the department, had been in the hospital battling COVID-19. He died just before 8 on Monday night at the age of 49.

Officer De La Fuente had also served in the US Army before joining the police force.

A procession of dozens of local law enforcement, including Clovis police officers, CHP officers and sheriff's deputies to honor his life could be seen on Highway 168 and in downtown Fresno on Monday night.

"Angel is a prince among men. He started his life as a soldier serving his country and later served his community, he's always felt that need to serve his fellow mankind," Hall added.

Chief Hall said the department has seen roughly more than 100 employees come down with COVID, with close to 500 having to quarantine at some point, but De La Fuente is the first officer he's lost to the virus. And he's certainly not alone in his sorrow.

"Angel was one of those guys where as soon as you met him you liked him and he had an incredible reputation with the other officers," former Fresno Police chief and Mayor-elect Jerry Dyer said.

Much of De La Fuente's 22 years of service was spent on the south side of Fresno under Dyer. In fact, he was one of Dyer's first hires as chief.

"When you think today about what you want your police officers to be like you want them to be like Angel," Dyer said.

On Wednesday, California Governor Gavin Newsom released a statement, saying he was saddened by De La Fuente's passing and that Capitol flags would be flown at half-staff in his honor.

The Fresno Police Department believes De La Fuente likely contracted the coronavirus while on the job. His death will be considered a line-of-duty death by Fresno Police.

His was a life of service cut short but a legacy left behind that's worth following.

"He's been very active within the department, he's well-liked, hard worker, an easy smile, and he's going to be missed in this organization," said Hall.

Chief Hall also said they are in the process of planning De La Fuente's funeral - trying to do everything they can to honor him while complying with COVID rules.

Jennifer and I were deeply saddened to learn of the recent passing of Officer De La Fuente, a highly regarded member of his community who dedicated his life to serving his state and nation. We extend our sincere condolences to Officer De La Fuente's family, friends and colleagues during this difficult time.

Officer De La Fuente, 49, was hospitalized on December 7, 2020 after contracting COVID-19 on duty. He passed away from complications due to COVID-19 on December 28, 2020. He was a 22-year veteran of the Fresno Police Department. During his time with the Department, he was assigned to the District Crime Suppression Team and Multi-Agency Gang Enforcement Consortium. Officer De La Fuente previously served in the U.S. Army.

He is survived by his wife, Lilia, and four children.