Bulldogs win turnover battle, bounce back with 17-0 win at Wyoming 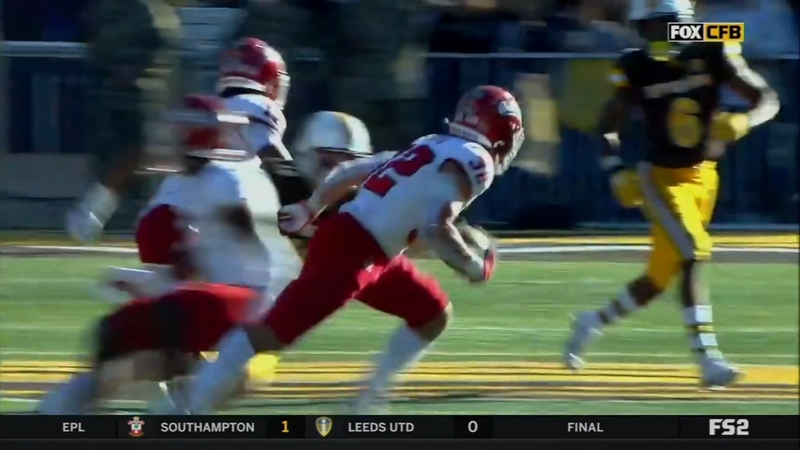 Bulldogs win turnover battle, bounce back with 17-0 win at Wyoming

"Felt we beat them at their own game," said head coach Kalen DeBoer. "We took care of the football and we got the turnovers."

The Bulldogs entered with the top passing offense in the country but senior quarterback Jake Haener was held to 96 passing yards.

Instead the Dogs defense was the story coming away with a season high 5 takeaways (the most since 5 takeaways against UNLV on Oct. 18, 2019).

"We lost our spot in the Top 25, we gave it up, " said senior defensive end Kevin Atkins. "We couldn't blame anyone we flat out beat ourselves so what are we going to do to get better? That was our message all week."

Evan Williams had a career high two interceptions. "Our defense came in with the mentality that it's gotta be us," Williams said. "We had that sour taste in our mouth from two weeks ago and...we just had to live with that."

We apologize if you were trying to fly into Laramie this afternoon... it's a no fly zone. 🚫🚫🚫🚫

It was the second shutout of the season but first road shutout since beating CSU Northridge 41-0 in 1974. "What I'm most excited about is finding different ways to win. I think that's a sign of a great football team," DeBoer said.

Ronnie Rivers was the leading rusher running the ball 22 times for 73 yards.

Following a loss at Hawaii and then a bye week, FS was back on the road at Wyoming. At an elevation of 7,220 feet, the Cowboys War Memorial Stadium is the highest D-I FBS college football stadium in the US.

After a three and out start, Kerman grad Sean Chambers fumbled and Elijah Gates recovered to set up the Dogs drive at the Cowboys 41. A targeting call on the Cowboys gave FS an extra set of downs & Haener capitalized finding tight end Juan Rodriguez for a 2 yard touchdown.

Wyoming was driving to start the second quarter but a deflected pass fell into the hands of Evan Williams for the first interception of the season for the junior defensive back.

The two sides traded punts before Cesar Silva missed a 40 yard field goal giving Wyoming the ball at their own 22 with 2:00 to play in the first half.

The offenses continued to struggle to start the second half. Levelle Bailey tipped another Chambers pass leading to a Malachi Langley interception that was returned to the Wyoming 6. Haener found Jalen Cropper to extend the FS lead to 14-0.

How to capitalize on a turnover: @jakehaener10 connects with @jcropper_5 for a 3-yard touchdown -- @FresnoStateFB builds a two score lead over Wyoming.

Williams came away with his second interception of the game in the fourth quarter, the Dogs 4th takeaway on the day. Silva would hit a 41 yard FG to make it 17-0.

"I think it's going to be a really big game for us and we need those fans to show up. We need 40 thousand there screaming loud and doing everything they can to help us get that win," Haener said on the Nevada game.