Greg Stobbe has been an advisor to Fresno Christian's online newspaper The Feather for over 25 years.
KFSN
By Shayla Girardin 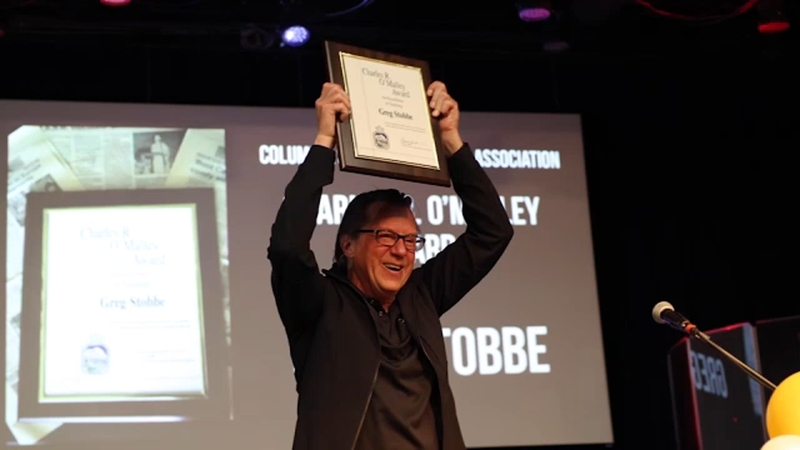 FRESNO, Calif. (KFSN) -- A Valley educator is being recognized for his commitment and dedication to students.

Greg Stobbe has been an advisor to Fresno Christian's online newspaper The Feather for over 25 years.

"It started with five students in one of these little closets for 2 years and it grew from there," says Stobbe.

That endeavor has grown into an award-winning paper with dozens of students participating each year.

"Somehow he's created a program to put us on the map as one of the top 10 news programs in the nation," says advisor to The Feather, Kori James.

"He's always been a different teacher in the way he acts with his students. He makes everyone feel like a family. He's always so unpredictable," says student Micah Friesen.

But Stobbe's journey hasn't been easy.

The beloved teacher lost his wife to a rare degenerative disease in 2020.
then shortly after, he found out he had cancer.

Stobbe learned he had optical melanoma in his only eye - having lost sight in his other eye as a child.

After intense radiation he now has 30% of his vision left.

"His faith and his strength through the whole thing has continued through all of his hurts and his hard times and he still encourages students, he's still pouring into them," says James.

Now attending the school of the blind, he's determined to continue his journey and support his students.

"I'm not going to let my students down, my daughters down, and my wife down. I've got 2 grandkids too," Stobbe says.

His hard work was recognized last month with the Charles R O'Malley Award for Excellence in teaching, one of the highest honors for advisors in the nation.