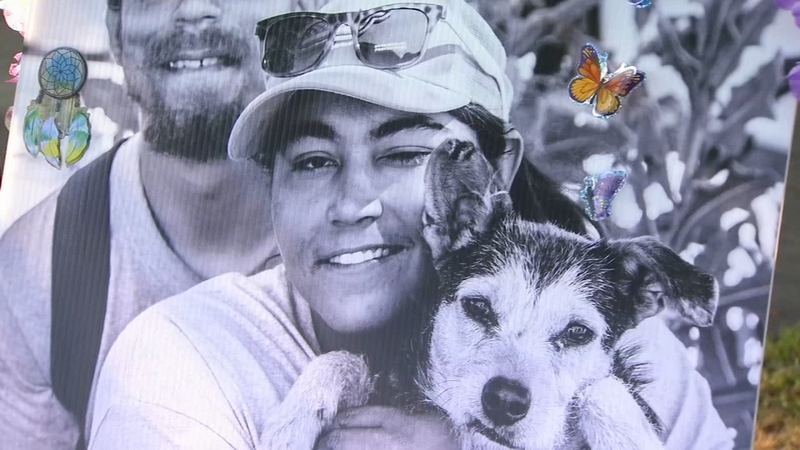 FRESNO, Calif. (KFSN) -- Gathered near the corner where 29-year-old Monique Contreraz was killed, her sister, Janay Conley, struggled to speak through tears.

Monique, along with her life partner and dog, lived on the streets in northwest Fresno.

"She had some bad decisions but that did not change who she was in her heart," said Dez Martinez with the organization We Are Not Invisible.

Police say Monique was pushing a shopping cart and walking her dog on a leash at the intersection at Herndon and Milburn when she was hit by 38-year-old Shawn Ginder's pickup truck. She was dragged for eight miles until the suspect left her in the parking lot of the La Quinta Inn.

Those who love Monique can only hope she didn't suffer long.

"I hope she didn't feel any pain," said Dez. "I hope that she didn't experience the fear of being trapped under the car or anything."

Authorities launched a manhunt, which spanned across county lines eventually leading to a home in Madera County.

Police say they were preparing to tell Ginder to come out when he jumped out of a third-story window. He's still hospitalized in critical condition but will eventually be booked into jail.

Now, Monique's family is hoping the tragedy prompts people to think about the homeless in a different light.

"You see somebody on the streets, ask them, 'Are you, ok sir? Are you ok ma'am?' It is very easy for any one of us," said Janay. "We can all fall on hard times."

Wednesday night's vigil honored not only Monique, but the other people who lived and died on the streets of Fresno.

"When we think about unhoused and when we think about people on the streets, that's not just anybody," said Janay. "That is somebody's baby. That's somebody's brother. That is somebody's sister. That is somebody's daughter."
Report a correction or typo
Related topics:
fresnohit and runvigil
Copyright © 2022 KFSN-TV. All Rights Reserved.
TOP STORIES
Tax refunds for CA: Here's what's included in new relief package
3 dead, at least 50 injured after Amtrak train derails in Missouri
Abortion protections to be on California ballot in fall
Target, Walmart weigh paying you not to bring back unwanted items
Nelson Esparza dropping defamation lawsuit against Garry Bredefeld
Visalia police searching for missing 72-year-old woman
Man killed in early morning shooting in Atwater, police say
Show More
Explosion at popular Fresno food truck injures 2, including minor
Lake Kaweah updates 'no wake zone' after dock failure caused by storms
Fowler Ave. from Olive to Clinton to be closed until September
SCOTUS sides with football coach who wanted to pray on the field
Tips to keep your dogs safe during Valley triple-digit heat
More TOP STORIES News