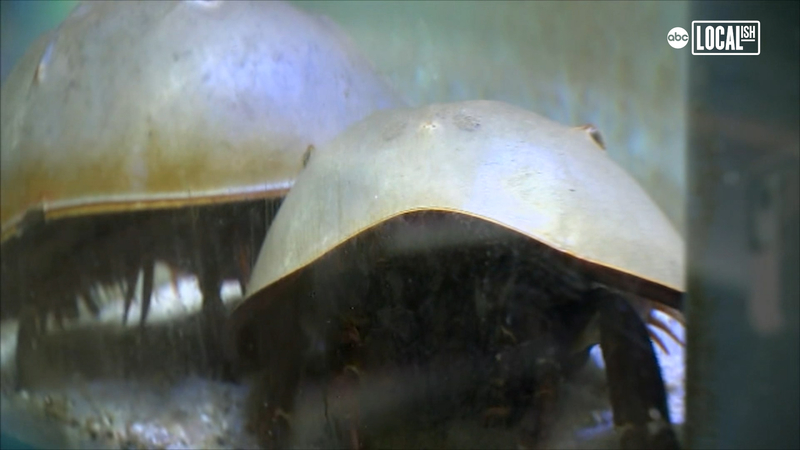 LONG ISLAND -- If you've ever gotten a vaccine, including the COVID vaccine, you have a very unlikely creature to thank. The horseshoe crab.

For the last 40 years, the blue blood from the horseshoe crab, a creature which predates the dinosaurs and has survived all of Earth's five mass extinctions, has been used to safely manufacture vaccines, medicines and vitamins.

The blood is used to detect bacteria or toxins during the manufacturing process.

But, the horseshoe crab population is declining in our area and around the world due, in part, to fishermen using them for bait, according to Dr. John Tanacredi, who operates the only horseshoe crab breeding facility in the Western Hemisphere, which is located in West Sayville, on New York's Long Island.

Tanacredi, who has been studying horseshoe crabs for years at the Center for Environmental Research and Coastal Oceans Monitoring at Molloy College, said New York State has one of the worst records in the country for the maintenance of its horseshoe crab population.

He said it's in part because of the state's harvesting rules, which allow fishermen to harvest horseshoe crabs for bait. The bait is used to fish for conch and eel.

The New York State Department of Environmental Conservation has set a harvesting cap of 150,000 horseshoe crabs for 2022.

Tanacredi said the horseshoe crab population from Brooklyn to the eastern tip of Long Island has been declining since at least 2003.

"They should not be captured for bait anymore," Tanacredi said. "They need to be protected."

In 2007, New Jersey made it illegal to harvest horseshoe crabs.

Many attempts have been made in the New York State Legislature to try to change the horseshoe crab harvesting rules, but none has passed.

While obtaining blue blood from horseshoe crabs is relatively harmless, thousands of them die every year after being put back in the water.

Animal rights activists have called upon the pharmaceutical industry to use synthetic blue blood, but the industry has been reluctant. Tanacredi said authentic blue blood is considered the gold standard for quality control testing for vaccines and medicines.

Tanacredi said the other factor threatening the horseshoe crab population is destruction of their natural habitat from development by humans.