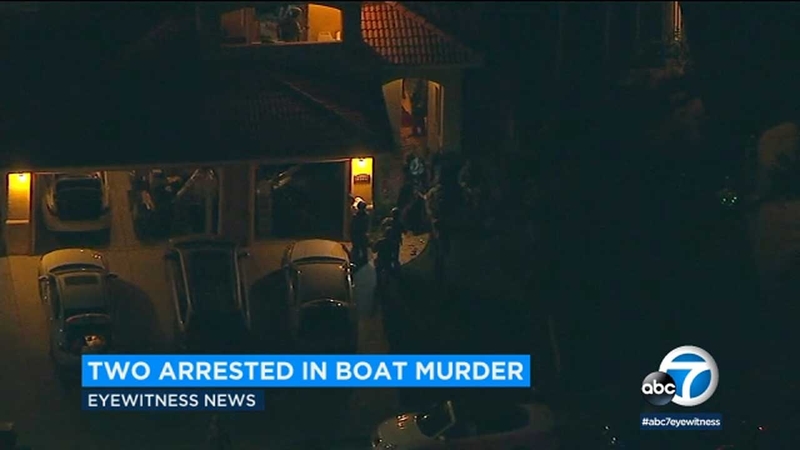 2 arrested in OC months after body found off Oceanside coast

FOUNTAIN VALLEY, Calif. -- The Federal Bureau of Investigation has arrested two suspects in the murder of a man on a boat who was shot in the head before his body was thrown overboard near the southern Orange County coast, authorities said.

Le, 38, was arrested without incident as FBI agents served a search warrant Thursday morning at a home in the 18000 block of Third Street, the Fountain Valley Police Department said in a statement.

Neighbors said they were awakened by flash-bang devices that some mistook for thunder. One nearby resident said a woman who lives in the two-story house rents rooms out to several tenants.

Prosecutors charged Le, an alleged drug trafficker, with first-degree murder, according to a statement from the U.S. attorney for the Central District of California.

"Le has confessed to a confidential human source that he took the victim out on the boat, confronted the victim about a debt owed, shot the victim, tied weights to the victim's ankles, and sank the victim's body in the ocean," the statement said, citing an affidavit that was unsealed Thursday.

Ritze, 40, one of the boat's two registered owners, was charged with being an accessory after the fact.

The victim's body was recovered off the coast of Oceanside on Oct. 16, investigators said. The deceased man has not been publicly identified.

Le allegedly told the victim's girlfriend and others that Le had decided not to go on the fishing trip at the last minute. Nine days after the body was recovered, however, the FBI informant contacted a member of the victim's family to say Le had told a different story.

According to the news release, several days later the informant reported that Le had confessed to killing the victim because the victim owed Le $30,000 to $40,000. At a subsequent meeting the informant expressed a willingness to work with law enforcement.

On Nov. 10, the affidavit says, the informant, who was now working with investigators, bought cocaine from Le at Le's home.

An AR-15-type rifle, a shotgun and a crossbow were found at Le's home Thursday, officials said.

Information allegedly shows that Ritze's phone was in the area of the harbor when the boat departed and returned.

Prosecutors said surveillance tapes from Dana Point Harbor show "three individuals -- believed to be Ritze, Le and the victim -- when the boat is launched," but only Ritze and Le are visible when the boat returns hours later.

Ritze is accused of surveilling cameras near the harbor soon after the killing and purchasing a tracking device that was later found on a vehicle belonging to the victim's girlfriend.

The two defendants in the case, which is also being investigated by the Coast Guard, are expected to appear in U.S. District Court in Santa Ana on Thursday afternoon.