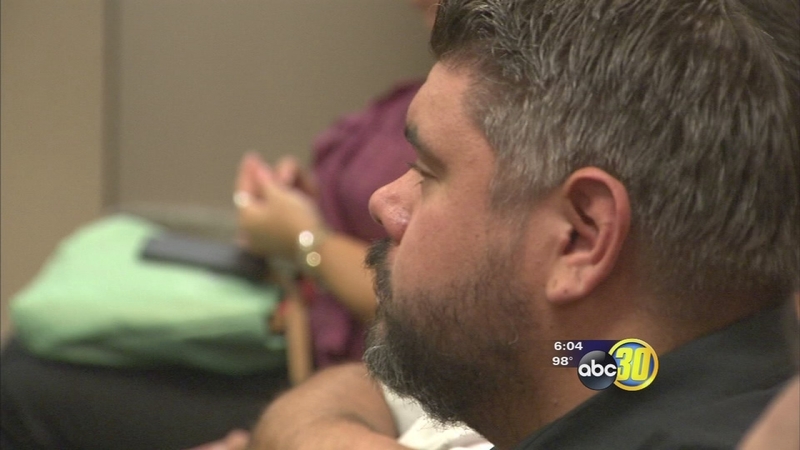 FRESNO, Calif (KFSN) -- The hazing death of a Fresno State freshman two years ago will result in jail time for two of his fraternity brothers, but their sentencing also brought mercy.

18-year-old Philip Dhanens died of alcohol poisoning after a party in August 2012.

This is what forgiveness looks like. Minutes after a judge sentenced Leonard Serrato for the hazing death of Philip Dhanens, the victim's mother embraced Serrato.

Diane Dhanens' message in that moment was much the same as she expressed in court to both Serrato and fellow Theta Chi officer Aaron Raymo.

"I love you boys," she said. "Thank you for being young men of courage and integrity."

As a Theta Chi pledge in 2012, Philip Dhanens died after drinking large amounts of hard liquor at a party. Serrato bought the alcohol and prosecutors say he egged Dhanens on to take his last large gulps of rum. Raymo was also held responsible, along with fraternity president Daniel Baker. But prosecutors say those two were less to blame.

Raymo actually gave Dhanens CPR as the 18-year-old fell unconscious with a blood alcohol content of about .40. Two years later, he told the Dhanens family he can't stop thinking about that night.

"Every day I think about Philip, but I try to let it inspire me instead of bringing me to sorrow," Raymo said.

Diane Dhanens also asked for her son's death to inspire. She marked her 52nd birthday in court, hoping to launch change at colleges everywhere.

"This is one aspect of college life that must stop," she said of hazing. "This will only happen, gentlemen, if you and I stand together and accept what has happened, accept the punishments for breaking the law, and accept the death of a friend because of poor judgment and not caring about the safety of your fraternity brothers."

Raymo will serve 30 days in jail; Serrato 90. Serrato says when he gets out, he hopes to speak to college students about the dangers of underage drinking, ensuring Dhanens' death was not in vain -- perhaps a fitting birthday gift for his mother.