KFSN
By Vienna J. Montague
SICILY, Italy -- You wait a while for a house that's practically given away to you, and then three come along at once.

Yes, Italy's 1 homes are back -- and this time, what's up for grabs is a collection of houses in the southern region of Molise.

Castropignano -- a village topped by a ruined medieval castle, 140 miles southeast of Rome -- is the latest community to offer up its abandoned buildings to newcomers.

It follows in the steps of Salemi in Sicily and Santo Stefano di Sessanio in Abruzzo, both of which have launched initiatives to encourage newcomers in the last month.

However, unlike most of the schemes, which auction off dilapidated buildings from 1, or $1.20, Castropignano is doing things differently.

There are roughly 100 abandoned buildings here, but rather than sell to the highest bidder, mayor Nicola Scapillati wants to match interested parties with the right house for them.

"The scheme here works a bit differently," he says.

"I'm moving along two parallel paths, reaching out both to potential buyers and old owners at the same time, step by step, to make demand meet supply.

"I don't want my town invaded by a property stampede or to turn into the latest housing speculation deal."

In fact, instead of going through the authorities, Scapillati wants interested parties to email him direct.

"I welcome anyone who would like to purchase a new home here to email me directly (nicola.scapillati[AT]me.com) with a detailed plan of how they intend to restyle and what they would like to do with the property -- make it a home, B&B, store, or artisan shop.

"They should also list any requirements they may have, like access for people in wheelchairs. The village is tiny and cars can't navigate the narrow alleys and steps."

The more specific the request, the easier it will be to find the appropriate dwelling and liaise with the current owner.

"This a targeted, tailored operation," he adds. "People need to know what exactly they're signing up for."

To make it all the more official, Scapillati has sent notices to Italian embassies abroad, alerting them to the project.

So what's the catch? There are, of course, conditions. Buyers must renovate the property within three years from the purchase and cough up a down payment guarantee of 2,000 ($2,378), which will be returned once the works are finished.

The project launched in October, when the authorities told the owners of abandoned properties that if they didn't renovate them themselves, the town would take ownership of them for safety reasons.

So far, many owners have already agreed to hand their properties over, keen to let go of houses it would cost money to demolish.

Scapillati is confident that at least 50 will join. If they don't, the town council will expropriate the houses of those who don't respond, and place them on the market.

In the meantime, dozens of interested people from Europe have already contacted him, asking to buy the houses. And he hopes that, with their help, the village will not only regain its joie de vivre, but also become safer.

"It hurts me to see the beauty of our ancient historical center scarred by crumbling houses, slowly decaying," says the mayor.

"It's sad and dangerous. Without renovation these buildings are a threat. They could collapse any minute -- it's also a matter of making the village safe".

Scapillati -- whose family emigrated to work in Italy's richer north -- felt the pull of his origins as an adult. He returned on a mission to preserve the architecture of the village, in the hope that it can keep their traditions going.

"I want to stop the decline in its tracks, keep the village flame alive. I'm driven by passion and love for my hometown," he says.

And although Castropignano isn't exactly a lively place -- it has just one restaurant, a bar, a pharmacy and a few B&Bs -- he thinks it has a sleepy allure.

"Here we've got nothing grand to offer except peacefulness, silence, pristine nature, oxygen-rich air, great views and fantastic food, ideal to detox from the daily stress. It's not buzzing with life, that I must say, but it's peaceful and simple", he adds.

Today, there are barely 900 residents, down from 2,500 in the 1930s. After World War II, families emigrated in search of a better future; then, from the 1960s, the young people started moving to larger towns to study and find work.

But Scapillati would like to recover the glory of past days when Castropignano was a flourishing feudal center buzzing with artisans, merchants and travelers crossing Italy, protected by a powerful duke. In fact, the village was once renowned for its artisan shoemakers and cobblers.

Located on a rocky hilltop in Italy's central Apennine mountains, Castropignano is built over an ancient settlement of the Samnites, an ancient Italic people, who used it as a defensive lookout against the Romans -- who eventually defeated them.

The Samnites built fortresses and settlements in the surrounding countryside. In the valley below the village, alongside ruined ancient Roman villas is an enormous stone monument built by the Samnites. Half an hour south are the magnificent ruins of Saepinum, a town founded by the Samnites and then taken over by the Romans, whose city walls, theater and temples still exist.

This is the deepest part of Molise, a region of Italy largely unknown to tourists, sitting east of Lazio and between Abruzzo and Puglia on the southern Adriatic coast.

The lack of visitors has helped to preserve its rural authenticity, making Molise one of Italy's best kept secrets.

Castropignano's abandoned houses are located in the historical center, above a medieval castle with no roof -- it was bombed during the war and many of its stones were used to build the houses which are now on sale.

A maze of winding, cobblestoned alleys, gargoyle-covered arches and passageways, connects the castle to the village's upper residential layers.

Another group of houses for sale is in the clifftop hamlet of Roccaspromonte, perched on a high bluff two miles away. Near it is the Santuario della Madonna del Peschio, a ruined forest church now open to the elements with the sky as its rooftop and oak trees as walls.

The nuts and bolts

So what's up for grabs? Scapillati says that most of the buildings for sale are in decent shape, although they have unhinged doors, peeling paint and are partly covered in vegetation.

But there's a lot of potential. The architecture is a juxtaposition of styles -- richly ornate portals at the entrance of simple cottages. And many houses have panoramic views of the translucent Biferno river that runs through the valley.

Cecilia Vampa, a pensioner from Rome who fell in love with Castropignano during her university years, has restyled a few dwellings here. She says the stones are alive.

"There's a poetry woven in the way they've been chiseled, through artistry and hard work. These stones tell a story, I fell in love with them. They stir emotions."

Vampa says she likes the tight-knit simple community and welcoming locals. In Castropignano, she says, she has found "the lost rural peace of her adolescence."

Even today, the village seems to hark back to an earlier era. Back in the day, families would sleep on the upper floors while the kitchen and living areas were on the second level. Domestic animals such as hens, and donkeys -- the sole means of transport -- were kept in the stables on the ground floor.

An ancient shepherd trail to move livestock between their summer and winter pastures cuts through the village -- it's still used today to move grazing sheep and cows, as well as bike tours, walks and horse rides.

And each summer, the villagers celebrate the "Dodda" -- a re-enactment of the custom whereby young girls about to marry offered their dowry to the husband. Women ready to tie the knot parade through the streets in traditional white robes carrying baskets of linen, blankets and other bridal items made by their grandmothers. It's a symbolic gesture believed to bring good luck.

There are even spooky tales of enchanted forests packed with dwarfs and fairies that sing sad chants at midnight.

Gastro treats and beach retreats
Today, it's the food that will persuade those on the fence to move to Castropignano. Local specialities include succulent lard-stuffed soppressata sausages, cold cuts and cotenna (pork rind) -- said to be given an edge thanks to the fresh air.

Cavatelli are screw-shaped pasta served with pork ragu sauce, while 'mbaniccia is a special soup cooked with corn "pizza" (chunks of stale bread). The typical cheese in the area is the oozy caciocavallo, which is tied with a knot and hung from a cord, giving it a distinctive teardrop shape.

Got a sweet tooth? Get ready to feast on savory jams, Christmas cakes stuffed with candied fruits called Pigna, and almond and honey biscuits to dip in wine.

Day trips to both Rome and Naples are possible, since Castropignano is situated between the two. It's also within reach of the Adriatic coast's famous beaches, as well as the snow-capped mountains of ski resort Campitello Maltese. Ferry boats to the unspoiled Tremiti islands -- a hotspot for Italian tourists -- depart from Termoli, an hour's drive away.
Report a correction or typo
Related topics:
real estatetravelhome repairsreal estate developmentitalyhomeu.s. & worldreal estate
Copyright © 2021 KFSN-TV. All Rights Reserved.
ITALY 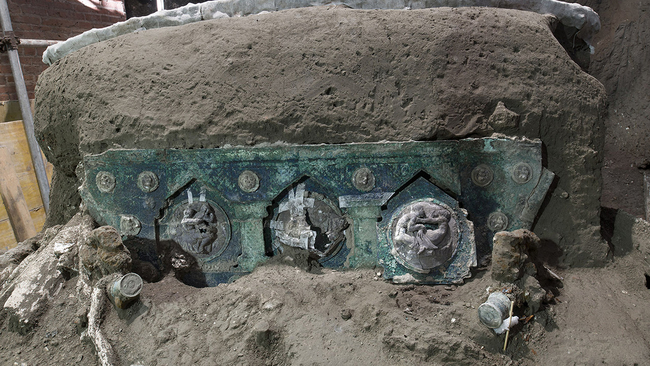 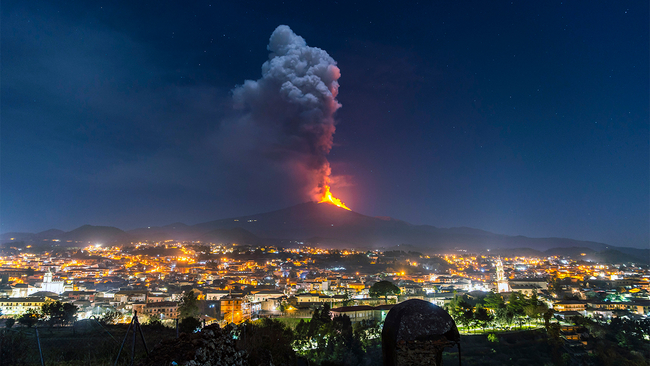 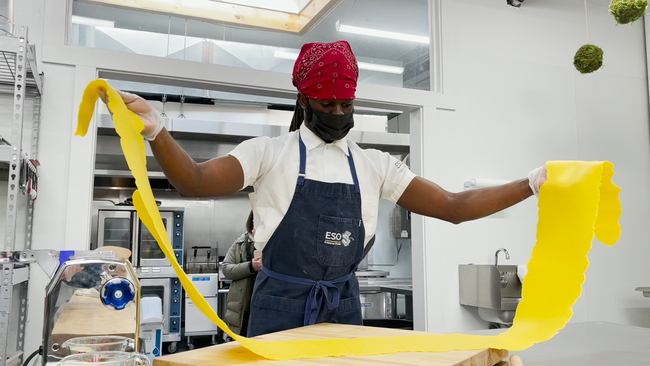