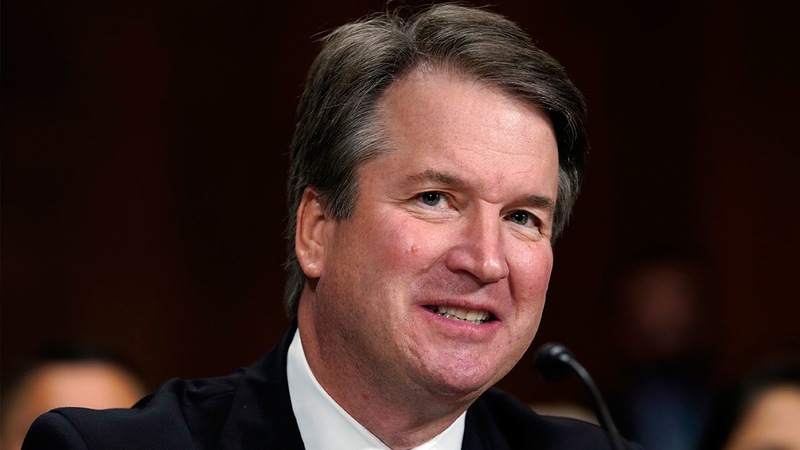 WASHINGTON -- New Supreme Court Justice Brett Kavanaugh is returning to the White House for a televised appearance Monday with President Donald Trump less than a month before pivotal congressional elections.

Kavanaugh will take part in an entirely ceremonial swearing-in two days after he officially became a member of the high court and following a bitter partisan fight over his nomination. The event is unusual for new justices. Only Samuel Alito and Stephen Breyer participated in a White House event after they had been sworn-in and begun work as a justice, according to the court's records on oath-taking by the current crop of justices.

Kavanaugh, along with his law clerks, already has been at the Supreme Court preparing for his first day on the bench Tuesday when the justices will hear arguments in two cases about longer prison terms for repeat offenders. The new justice's four clerks all are women, the first time that has happened.

The clerks are Kim Jackson, who previously worked for Kavanaugh on the federal appeals court in Washington, Shannon Grammel, Megan Lacy and Sara Nommensen. The latter three all worked for other Republican-nominated judges. Lacy had been working at the White House in support of Kavanaugh's nomination.

In his Senate testimony last month in which he denied allegations that he sexually assaulted a woman in high school, accusing Democrats of orchestrating a partisan campaign against him, Kavanaugh had promised that, if he was confirmed, the four clerks working for him would be women. "I'll be the first justice in the history of the Supreme Court to have a group of all-women law clerks. That is who I am."

On Monday, Trump kept up attacks on Democrats for opposing Kavanaugh, pressing on an issue that Republicans have used to energize their voters.

Kavanaugh was "caught up in a hoax that was set up by the Democrats," Trump said as he left the White House for a trip to Florida.

"It was all made up, it was fabricated and it's a disgrace," he said.

The climactic 50-48 roll call vote Saturday on Kavanaugh was the closest vote to confirm a justice since 1881. It capped a fight that seized the national conversation after claims emerged that Kavanaugh had sexually assaulted women three decades ago. Kavanaugh emphatically denied the allegations.

The accusations transformed the clash from a routine struggle over judicial ideology into an angry jumble of questions about victims' rights and personal attacks on nominees.

Ultimately, every Democrat voted against Kavanaugh except for Sen. Joe Manchin of West Virginia.

Kavanaugh was sworn in Saturday evening in a private ceremony as protesters chanted outside the court building.

Senate Majority Leader Mitch McConnell said Sunday praised his party's senators, whom he said re-established the "presumption of innocence" in confirmation hearings. "We stood up to the mob," he said.

Trump has now put his stamp on the court with his second justice in as many years. Yet Kavanaugh is joining under a cloud.

Accusations from several women remain under scrutiny, and House Democrats have pledged further investigation if they win the majority in November. Outside groups are culling an unusually long paper trail from his previous government and political work, with the National Archives and Records Administration expected to release a cache of millions of documents this month.

Still, Sen. Chris Coons, D-Delaware, said he believed it would be premature for Democrats to talk about re-investigating Kavanaugh or a possible impeachment if the party takes control of the chamber, stressing a need to help heal the country.

"Folks who feel very strongly one way or the other about the issues in front of us should get out and vote and participate," Coons said.

With one confirmation just ended, McConnell also signaled he's willing to take up another high court nomination in the 2020 presidential election season should another vacancy arise.

He tried to distinguish between President Donald Trump's nomination of Kavanaugh this year and his own decision not to have the GOP-run Senate consider President Barack Obama's high court nominee, Merrick Garland, in 2016. McConnell called the current partisan divide a "low point," but he blamed Democrats.

"The Senate's not broken," McConnell said. "We didn't attack Merrick Garland's background and try to destroy him." He asserted that "we simply followed the tradition of America."

Two years ago, McConnell blocked a vote on Garland, citing what he said was a tradition of not filling vacancies in a presidential election year. But when asked again Sunday about it, he sought to clarify that a Senate case in 1880 suggested inaction on a nominee only when the chamber was controlled by the party opposing the president.

Republicans hold a 51-49 majority in the Senate, with several seats up for grabs in November. The court's two oldest justices are Democratic appointees: Ruth Bader Ginsburg is 85 and Stephen Breyer is 80.