Equity Report: Why so many Latinos in Central California lack health insurance 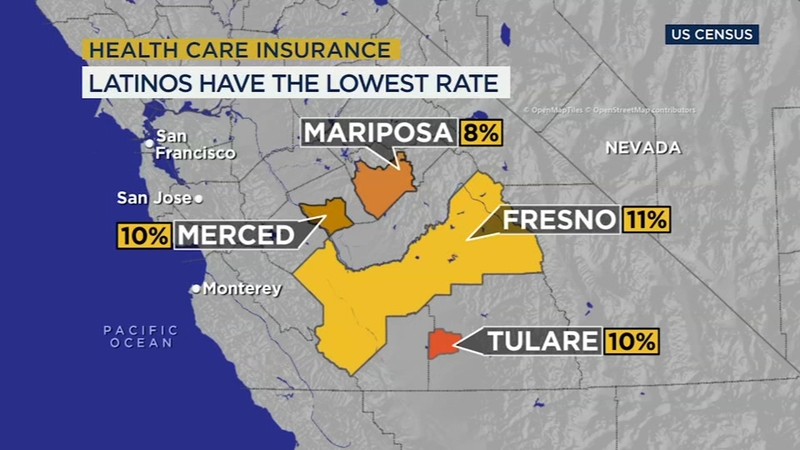 Equity Report: Why so many Latinos in Central California lack health insurance

FRESNO, Calif. (KFSN) -- Health care coverage is critical for all families, but access to insurance is not the same for everyone.

Paula is an undocumented immigrant who crossed the U.S.-Mexico border decades ago to say goodbye to her sister who was battling terminal lung cancer. She asked us not to use her full name to protect her identity.

Early in the COVID-19 pandemic, she tested positive for coronavirus after working closely with others at a packing house. Paula was forced to quarantine for weeks without pay and was eventually laid off.

"One day the ambulance brought me home and I got a bill for more than one-thousand dollars," said Paula."So I said I don't know how I'm going to pay for it because I don't have a job."

ABC30's data journalism team measured inequities in health care insurance coverage across Central California and found Hispanics or Latinos are the most uninsured racial-ethnic group in our area and are twice as likely to lack coverage compared to whites.

Chart not displaying correctly? Click here to open in a new window.

For lower-income undocumented immigrants, the numbers are even more staggering.

"Most of us have a tendency of working in agriculture, construction, domestic, housekeeping, childcare, as well as food services, or lower-wage occupations, instead of working in high paying jobs...those people have a tendency of having a higher income, and therefore they can afford insurance," said Dr. Jose Luis Bautista, an internist at Omni Family Health, a network of health centers dedicated to continuous health care regardless of a patient's ability to pay.

"Federally qualified clinics, rural health clinics are a must in our society to provide care for those people that are uninsured. I think we should develop group insurance so that group insurance is more affordable because a lot of people don't qualify for Medi-Cal," said Dr. Bautista.

A closer look at neighborhoods in Fresno where diagnosed diabetes rates are highest, about 75% of the residents is Hispanic. That's compared to 8 percent overall nationwide, according to the U.S. Census.

"Latinos and Latinas have a tendency of coming to the doctor when their diabetes is really out of control. When they have a foot ulcer when they actually have a foot infection that will require an amputation, they wait until the last minute because they're saving their money to protect the family, so they put the family first, before themselves," said Dr. Bautista.

In July, Governor Gavin Newsom signed a bill expanding Medi-Cal health care services to undocumented immigrants under 26 and over the age of 50. Assemblyman Joaquin Arambula wants to take it a step further.

"We know those who lack health insurance get sicker and die sooner," said Assemblyman Joaquin Arambula. "AB 133 is the down payment that we have now to cover all those who are over the age of 50. AB4 is to get us as a state to make a commitment to cover all regardless of immigration status by the end of 2026."

Rachel Linn Gish of Health Access California, a statewide health care advocacy group lobbying for universal coverage. She explains that even with coverage, some can't afford to pay the deductible so instead, many remain uninsured.

"There's still a sizable portion of bankruptcies that are medical-related. And if you don't have that security for you and your family to know that if something bad happens that you can get the care, you need without you literally going bankrupt, that's what we're trying to do here," said Gish.

That's why the ABC-owned television stations launched The Equity Report giving you the information and tools to spark that change.

The Equity Report is an unprecedented data journalism tool to track and measure racial equity across 100 of the largest U.S. cities. Using the data, the stations go beyond the statistics to tell the stories of marginalized communities; and through solutions journalism, the stations additionally provide local and national resources to encourage a pathway to build more equitable communities.