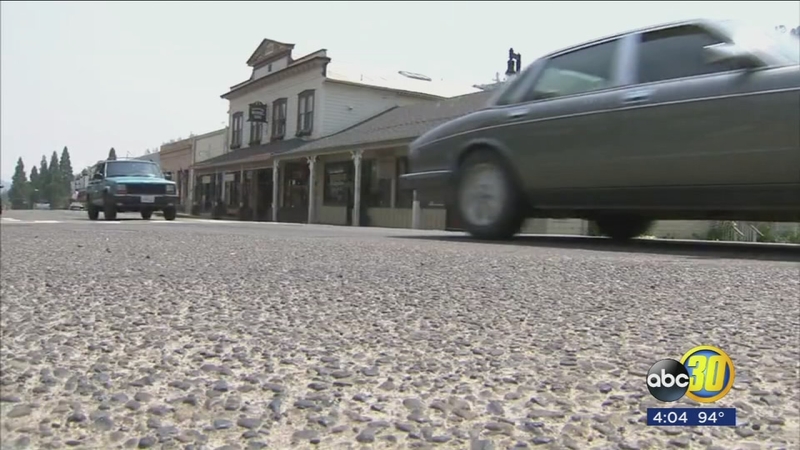 MARIPOSA, Calif. (KFSN) -- The town of Mariposa is slowly coming alive after the raging Detwiler Fire shut it down for three days.

Intense flames tucked behind some of the historic businesses and homes left many questioning what they would return to-- at least that was the case for the Rudds as they drove through for the first time. The only thing on their mind was finding their home up in Bear Valley in one piece.

"It jumped so quick, it's just unreal. It went to 70,000 acres-- it's just unreal how quick it went," said Stan Rudd, of Bear Valley. "We'll trust in God and go with what we have and what he gives us."

The unforgiving inferno grew from 70,000 acres Thursday to 75,000 acres Friday-- on its sixth day, it is only 25-percent contained. Now, the nearly 4,000 firefighters are facing a new challenge, putting the growing blaze out in the city of Coulterville.

"Firefighters are on the ground, they are making good progress, they are working really hard-- but once again this is steep terrain," said Toni Davis, Cal Fire.

As they do that in rugged areas, assessment crews are taking count of damaged building-- with about 80-percent of it done only 58 structures are destroyed.

However, none of those destroyed structures are businesses in the heart of Mariposa. Jon Zellhoefer, the owner of Bridal Veil Brewing, said he is ready to thank firefighters for saving what some of the people in this town have worked so hard for.

#PioneerMarket opens its doors for first time today after being closed bc #DetwilerFire @ABC30 pic.twitter.com/VW7pGaGKdw

"We really honor our firefighters, so if they do have an opportunity to come in to have a beer-- hey, it's on me."

Cal Fire is still asking some of the businesses to prepare to have to close shop at any point. They said just because the mandatory evacuation order has been lifted there is still an advisory in place.

When the fire unexpectedly shifted south earlier this week, Pulido only had four minutes to get out.

Meanwhile as the town of Mariposa rose from the ashes Friday, some residents are coming home to rubble where their houses once stood.

When the fire unexpectedly shifted south earlier this week, Pulido only had four minutes to get out.

"The living room," she said while pointing to the debris. "This would essentially be my kitchen area, my dining room."

Now, all that remains? Just the home's foundation.

"My worst fear is that they weren't going to be aware that there was a house here because we live so far in, and I think that's what happened because they didn't get up here in time," she said.

One by one, people are making their way back, but the unpredictable nature of the Detwiler Fire still looms.

"They need to make sure their bags are still packed," Toni Davis with Cal Fire warned.

Pulido has nothing left to pack like the other 61 families who also lost everything.

"How long is this nightmare going to be," she asked. "You're not going to have your home or a home you're going to be displaced. And what is going to be home to you or your kids?"

Within the city itself, stores like Yosemite Liquors are coming back to life.

"That was horrible, I have never seen it that way, it's good to see people, faces," resident Mary Hettinger said.
EMBED More News Videos

As the fire searched for new fuel in the north and southeast, dozens of families are still unsure if their homes lay in the path of destruction.

Hettinger spent the day welcoming folks back to town. Customers like Ron Miace filled her in on whose homes are still standing and whose are gone.

"I called my boss, and he said the flames came right to my doorstep and a B-1 bomber came through and blew it out," he said.

So far, 61 homes have been destroyed. Mary's coworker is one of the victims.

"We were here yesterday, we worked for a few hours," she said. "He found out yesterday that his house didn't make it"

Others like Pulido only found out after asking the CHP to let her through the roadblock to check on her chickens.

"My worst fear is that they weren't going to be aware that there was a house here because we live so far in, and I think that's what happened because they didn't get up here in time," she said.

As the fire searched for new fuel in the north and southeast, dozens of families are still unsure if their homes lay in the path of destruction.

"I have friends that are evacuated from Bear's Valley, Cathey's Valley," she said. "They are saying at their house for all they need."