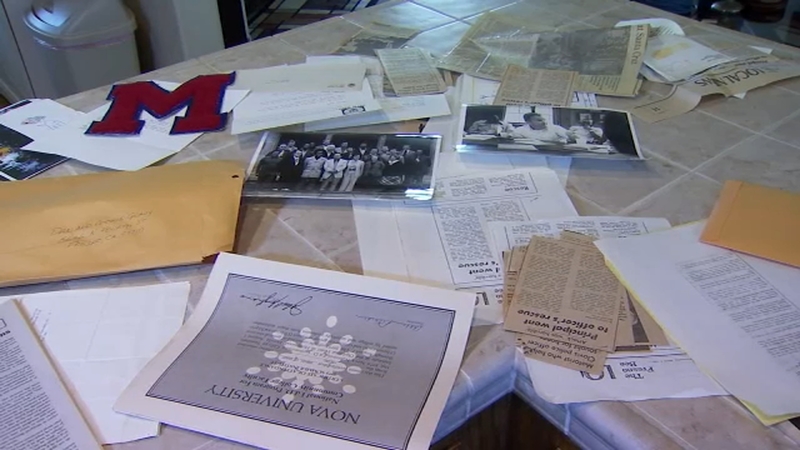 FRESNO, Calif. (KFSN) -- A Fresno woman found a manila envelope stuck behind a drawer in a dresser she bought from a local thrift store.

Inside were newspaper clippings, pictures and more.

Since then, Angela Hoffknecht has made it her mission to return the items to its rightful owner and called Action News for help.

Hoffknecht has a garage full of furniture she has purchased to refurbish in her spare time.

She picked up this gem at a Fresno thrift store about two weeks ago.

She was trying to talk down the price because one of the drawers wouldn't close all the way.

So she and an employee pulled the drawer out to figure out the issue.

Behind the drawer was a manila envelope.

The envelope was addressed to Dan and Cookie Grady and it was packed with newspaper clippings, pictures and letters.

The newspaper clippings showed Mr. Grady was recognized for helping a Clovis Police Officer who was attacked by a drunken suspect and the letters were from the time he was an educator a former principal at Firebaugh High.

But there was one item amongst the dozens Hoffknecht connected with immediately: a varsity letter from San Joaquin Memorial, her alma mater.

"I just wanted to make sure it gets back to the rightful owners and they can preserve them however they'd like to," Hoffknecht said.

Hoffknecht looked up Dan Grady and found he had passed away in 2020, so she tried tracking down relatives on Facebook.

She reached out to a few, but never heard back. That's when she asked Action News for help.

Action News was able to track down the children of Dan Grady and tell them the items had been found.

Family members were unable to meet Wednesday, and say they have been cleaning out things recently.

They said they did not mean to get rid of the envelope and can't wait to meet the person who worked to get it back to the rightful owners.

"I think it landed in the hands of the right person because I don't think anybody else would've even gave it a second chance," said Hoffknecht.

The family of Dan Grady says they've been cleaning things out recently and clearly missed that envelope.

They're grateful someone took the time to track them down.