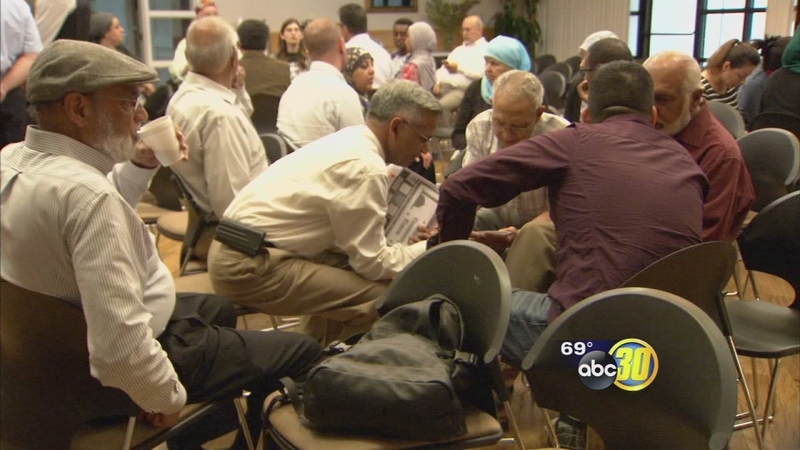 FRESNO, Calif. (KFSN) -- Republican presidential candidate Donald Trump made headlines again Wednesday calling for the ban of non-American Muslims in this country. That statement and others recently made by politicians have many local Muslims uneasy and Wednesday night they gathered to discuss their concerns.

There are 15,000 Muslims in Fresno. A small population-- but they say they need to make sure acts of violence and racism don't continue to spread here in the Central Valley.

For centuries, Muslims have looked to the Qur'an for guidance. On Wednesday, at the Islamic Cultural Center in Fresno, many found themselves vigorously defending it,

One Muslim student said, "I get asked questions. 'Hey, are you a terrorist? Do you have a gun?'"

Dozens of Muslims came to a community forum that discussed islamophobia.

It's the first event of its kind at the Fresno center, a result of recent political rhetoric-- much of it targeting Islam.

"I really thought discrimination against Muslims was a myth, until this last year," said one concerned Muslim.

Many said they never experienced this level of hatred in the past.

"That's his card, it's let's blame it on the Muslims or the Mexicans. He has to choose one of us to sympathize with his voters," said Adbul Wahed-Jawad.

The community laid out possible solutions to the anti-Muslim sentiment. Leaders urged families to become more involved in the political process. They also passed around a resolution they plan to submit to the Fresno City Council that would condemn islamophobia.

"There's this rift that's been created between the Muslim community and the general American community that we have been a part of since its inception," said Reza Nekumanesh, Director.

Muslims said they hope to bridge that gap with peace instead of hate.

"We're not the problem, but sometimes when you tell a lie, you believe it, and others will eventually believe it," said Wahed-Jawad.