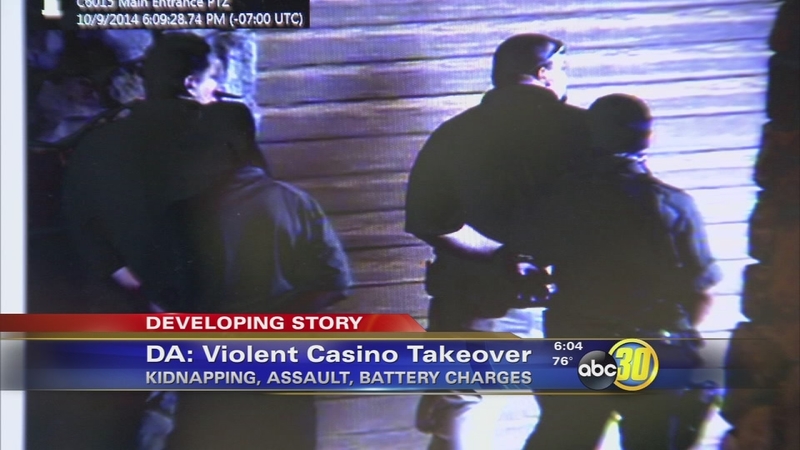 FRESNO, Calif. (KFSN) -- There are new developments in the power struggle that's shut down Chukchansi Gold Resort and Casino in Madera County for nearly a month. Charges have been filed against 15 people involved in the scuffle that led to the casino closure.

The charges stem from what the Madera County District Attorney's Office is calling a violent casino takeover where the suspects kidnapped, assaulted, battered and falsely imprisoned casino security guards.

Security video of that night shows the tribal faction led by Tex McDonald allegedly injured security members during the confrontation. Some security guards even claim bones were broken, according to members of the opposing tribal faction.

"We have been interested in the affairs of the Chukchansi tribe for a long time. We are well aware of the disputes amongst the tribal members," said Madera County District Attorney Michael Keitz. "It is not our duty here to get involved in the disputes between the tribal members. It is our duty to enforce the laws where there is a violation of the laws."

Of the 15 people charged only one of them faces one felony -- assault with a stun gun. The other 14, including leader Tex McDonald, face up to six felonies each, and their bail ranges from $800,000 to $1 million.

A statement released by a representative from McDonald's faction says the people who have been charged are police officers and leaders of the tribe, and put no one in harm. The representative says they'll be cooperating with the DA's office to clear their names.

Filing documents also list prior serious felonies committed by McDonald that could play a part in his sentence if he's convicted of the current charges.

In the meantime, more than 1,300 people remain without a job because of the Chukchansi Gold Resort and Casino closure.

Action News did speak with the Madera County Sheriff's Office who says they can't comment on pending arrests as this case is still under investigation.