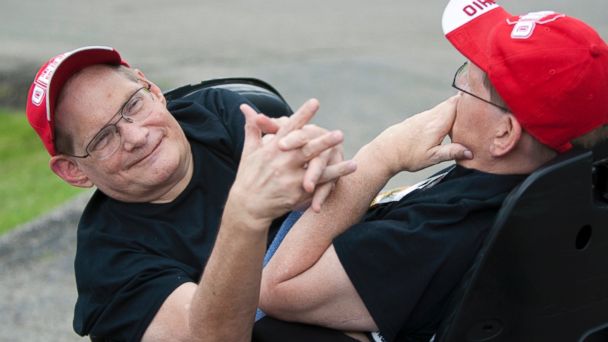 It wasn't technically a birthday but Ronnie and Donnie Galyon celebrated a big milestone when they officially outlived the original "Siamese" twins, Eng and Chang Bunker.

The Galyon twins celebrated turning 62 years, 8 months and 7 days old at a block party thrown by their brother Jim Galyon and his wife along with plenty of friend and neighbors.

Jim Galyon told ABC News he had promised his brothers a party when they finally reached their goal of living past the famous conjoined Bunker twins, who were a popular sideshow act in the 1800's.

"I had promised 'You get there, we're going to have a really big bash,'" Jim Galyon told ABC News. "We've had a lot of friends and family coming in from five different states and local neighbors."

Conjoined Twins Come Home For the Holidays After Separation

In video from ABC News affiliate WKEF-TV in Dayton, Ohio, the twins were seen at their party enjoying plenty of cake and presents.

"Thank everybody for coming and God bless you," Ronnie Galyon told the crowd.

Ronnie and Donnie Gaylon were born in 1951 and live with their younger brother, Jim Galyon, and his wife in Beavercreek, Ohio. The Galyon twins are joined from the breastbone area to the pelvis and spent their first months on Earth in the intensive care unit.

Before retiring to the Dayton area in 1991, they performed in circus and sideshow acts.

While a large banner nearby celebrated the twins as the "World's Oldest Conjoined Twins," they're hoping for another honor. This October they could break the world record for the oldest ever conjoined twins after they turn 63.

The Galyon family is also putting together a history of the twins' work and are asking anyone who might have seen them perform to contact the family at Worldsoldestconjoinedtwins@gmail.com.