Surveillance video from shooting 'speaks for itself' about deputy's actions: Sheriff 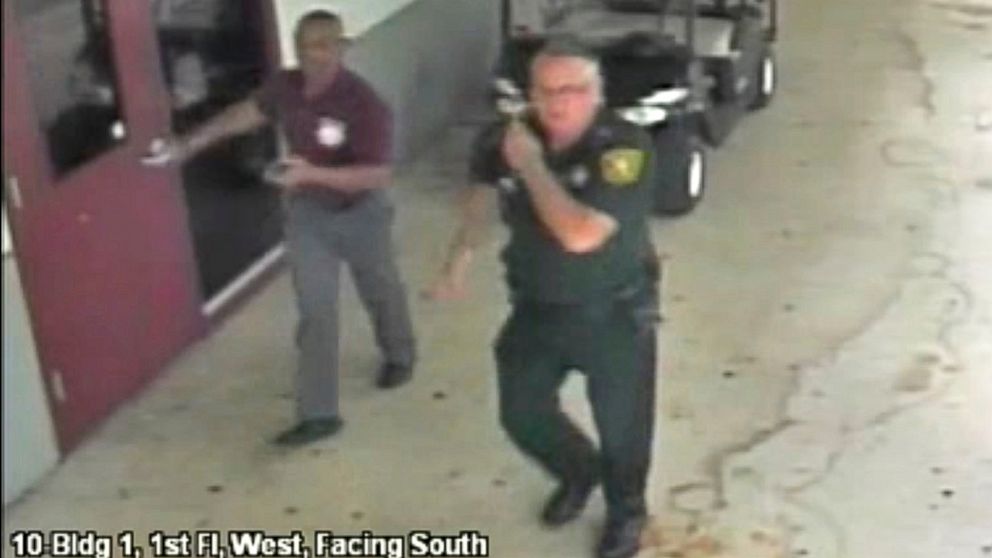 The Broward Sheriff's Office today released some surveillance video of Marjory Stoneman Douglas High School shortly after a gunman opened fire last month, and the sheriff's office says the video "speaks for itself" regarding the actions of the school's embattled former deputy.

The video, which starts at 2:22 p.m. -- one minute after authorities said the shooting started -- shows some students walking in an outdoor passage between buildings at the Parkland, Florida, campus.

An official is seen banging on the door of Building 1, located away from where the shooting was happening. An officer then approaches and talks into his radio, and the official and the officer start to run. They jump into a golf cart which then speeds away.

School resource deputy Scot Peterson's response to the shooting "speaks for itself," the Broward Sheriff's Office said in a press release today. It was not immediately clear if the officer seen in the video is Peterson.

"His actions were enough to warrant an internal affairs investigation, as requested by Sheriff Scott Israel on Feb. 21," the sheriff's office said. "After being suspended without pay, Peterson chose to resign and immediately retired rather than face possible termination."

"In accordance with Florida law, we are prohibited from discussing any other details of the IA investigation until the case has concluded," the sheriff's office added.

Calls to Peterson's attorney for comment on the release of the new video haven't been returned. But in a Feb. 26 statement, he defended Peterson's actions on the day of the shooting.

"The allegations that Mr. Peterson was a coward and that his performance, under the circumstances, failed to meet the standards of police officers are patently untrue," his attorney, Joseph DiRuzzo, said in a statement. "Mr. Peterson is confident that his actions on that day were appropriate under the circumstances and that the video (together with the eye-witness testimony of those on the scene) will exonerate him of any sub-parperformance."

Upon arriving at 1200 Building Mr. Peterson "heard gunshots but believed that those gunshots were originating from outside of any of the buildings on the school campus," he continued. "BSO trains its officers that in the event of outdoor gunfire one is to seek cover and assess the situation in order to communicate what one observes to other law enforcement. Mr. Peterson took up a tactical position between the 700-800 buildings corridor/corner."

The 27 minutes of footage released today does not show inside the buildings, the gunman or the faces of any students.

Seventeen students and staff members were shot and killed in the Feb. 14 mass shooting at Stoneman Douglas, sending shock waves throughout the nation.

The suspected shooter, Nikolas Cruz, a former student, allegedly fled with students after the shooting, and later was apprehended.

On Wednesday Broward County Judge Elizabeth Scherer entered a not guilty plea on Cruz's behalf, after his lawyers indicated he would stand mute, or refuse to plead either innocent or guilty. Defense attorney Melisa McNeill emphasized to the judge that Cruz remains willing "at any time" to plead guilty "in exchange for a waiver of the death sentence" and instead spend the rest of his life behind bars.