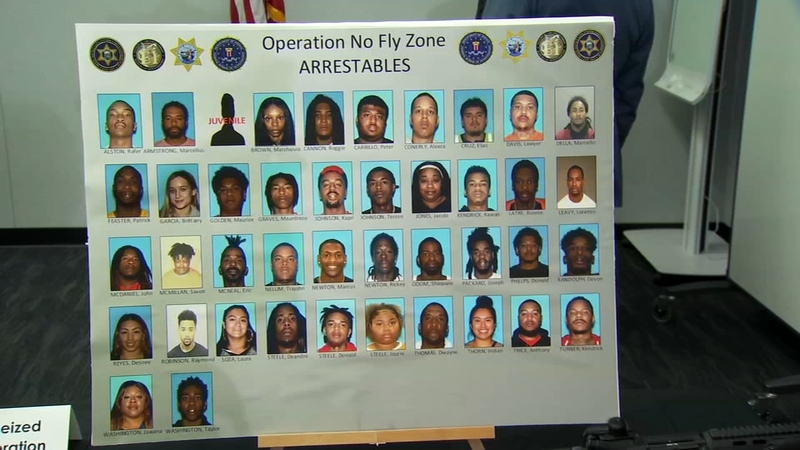 FRESNO, Calif. (KFSN) -- Dozens of suspects arrested in the "Operation No Fly Zone" gang-bust were in court for the first time Tuesday.

Newly obtained court documents detail the shootings, murders and other violence across Fresno between rival gangs over the last year and a half.

One by one, dozens of defendants appeared in court to be arraigned Tuesday.

Their faces were not allowed to be shown.

All of them were arrested in a multiagency sting last week called "Operation No Fly Zone."

"This has been an ongoing investigation for more than six months and all of the facts are very intertwined," said Sr. Deputy District Attorney Ashley Paulson.

Marcello Della was among the defendants arraigned in court.

Marcello Della has been behind bars since Feb. 2021. He’s charged with the murders of Michael Jenkins & Cruz Garcia on 1/1/2021. He’s also now been charged with two more murders… one of which he’s accused of orchestrating from jail. @ABC30 pic.twitter.com/nwv5aUyOA4

Della has been behind bars since February 2021.

He was arrested and charged with two murders for a shooting at an apartment complex on New Year's Day 2021.

Tuesday, he pleaded not guilty to two additional murder charges.

Dozens of suspects arrested in the "Operation No Fly Zone" gang-bust were in court for the first time Tuesday.

In one case, he and Terron Johnson are charged with shooting killing 17-year-old Jaylin Johnson in December 2020 while he was walking home.

And despite Della being behind bars, he's accused of orchestrating the murder of Jovante Askew in March of 2021.

Alston went and picked up Terron Johnson and court documents claim Johnson shot and killed Askew as he was taking out the trash.

Smith is an employee of Advance Peace a local organization with a goal to reduce gun violence in Fresno.

He's now been charged for conspiracy to commit murder.

Leonard Smith, an employee at @AP_Fresno is accused of conspiring to commit murder. Court documents claim he told Rafer Alston, Jr. to delete text messages related to the murder of Jovante Askew and leave town because he heard Alston was a suspect. @ABC30 pic.twitter.com/M1vEegqf4l

@AP_Fresno sent a statement to Action News as a response. @ABC30 pic.twitter.com/aNz7bDuxu7

Court documents claim Smith told Alston Jr. to delete messages related to the murder from his phone and the two met at Smith's home for several hours.

Smith is also accused of discussing a friend's plan to kill one of Alston's rivals and asking for a firearm so Smith could attack a person giving him problems.

In a statement, Advance Peace Fresno Program Manager Aaron Foster said, "Yes, Leonard Smith is an employee of Advance Peace Fresno. By the nature of the program, our Neighborhood Change Agents work with gang members to reduce cyclical and retaliatory gun violence. We are looking forward to a positive outcome."

If found guilty, the conspiracy to commit murder charge carries a penalty of 25 years to life.