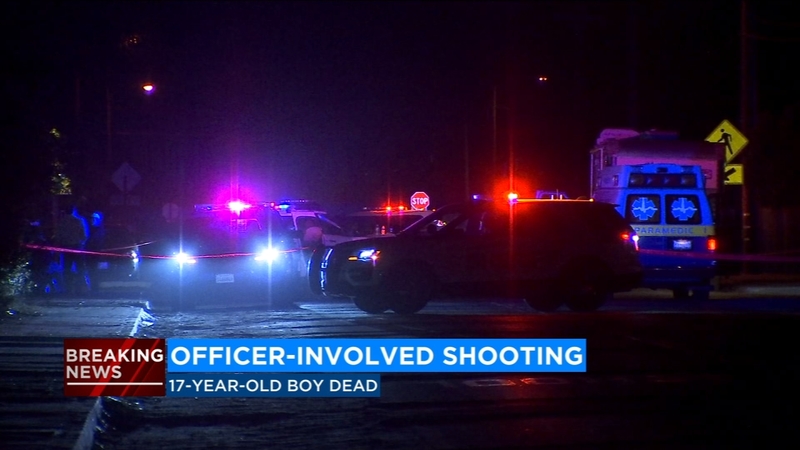 FRESNO, Calif. (KFSN) -- A 17-year-old is dead following an officer-involved shooting in Woodville.

At around 8 p.m., deputies say they responded to a family disturbance call at a home on Road 168 and Avenue 167.

Tulare Sheriff's deputies say family members reported their son was under the influence of drugs and was threatening to kill them. Some of them managed to lock themselves in the bathroom.

BREAKING: officer involved shooting investigation underway in Tulare County. TCSO & Porterville PD have Road 168 blocked off from Ave 167 to Ave 168 in Woodville. TCSO crime lab just arrived. Unknown if there are any injuries. Waiting to be briefed. @ABC30 pic.twitter.com/uYYX5SOdFX

When authorities arrived they found the teen with a knife then the situation escalated. He took an 11-year-old hostage believed to be his family member.

"They observed a 17-year old male with a knife they attempted to dialogue with him. At some point he took an 11-year old family member hostage. Unfortunately deputies were forced to take action and shots were fired inside the residence," said Captain Mike Watson.

It is unclear how many times the teen was hit. No one else was hurt.

It is unknown what was in the teen's system.

Family members reported to deputies they believed the teen smoked what they described as "dope."

The sheriff's office says Porterville police are taking over the investigation.

The Tulare County Sheriff's Office is investigating an officer-involved shooting in the Woodville area.

"I immediately responded last night to the scene and spoke with the officer who was being treated by medical responders. I have also viewed the body camera video. This officer absolutely saved the life of the 11-year-old boy who was being held at knifepoint by his own brother," said Sheriff Bourdeaux in a written statement.

"This was a life-threatening and quickly collapsing situation that the officer did not create. The violent suspect in this situation forced the officer to take the action, which no doubt saved the life of the victim," Bourdeaux said. "My heart is devastated for the family who is having to live out this absolute nightmare, as well as our Deputy who will certainly carry the events of last night with him for the rest of his life."
Report a correction or typo
Related topics:
woodvilleofficer involved shootingtulare county
Copyright © 2022 KFSN-TV. All Rights Reserved.
OFFICER INVOLVED SHOOTING
Suspect who ran toward police with hammer fatally shot by officers
Man shot by Fresno police, accused of stabbing K9 identified
Fresno police shoot wanted suspect accused of stabbing K9
26-year-old man shot by Fresno police officers identified
TOP STORIES
Man suffered severe burns after explosion at Table Mountain Casino
Foggy Day School Schedules, Fog Tracker from ABC30
Pedestrian hit by car in northwest Fresno
Website for free COVID tests is here. How does it work?
Domestic violence suspect arrested after standoff with Fresno police
Man accused of killing 2 in Fresno County booked in LA County jail
Body of Missy Hernandez recovered from aqueduct near Huron
Show More
All 3 suspects arrested in connection to Tulare County murder
Suspect in Visalia triple homicide pleads not guilty to murder charges
Airlines worldwide rush to change flights over US 5G problems
Man guilty for killing Kerman couple must wait for new trial decision
Will inflation continue to rise? We talked to a local expert
More TOP STORIES News