"Without the actions of Dr. Cheng, it is no doubt that there would be numerous additional victims in this crime," officials said.
KABC 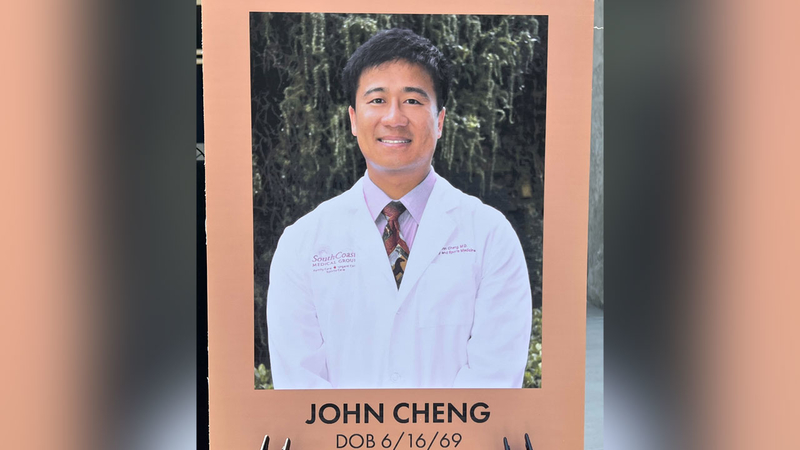 ORANGE COUNTY, Calif. -- A prominent Orange County doctor who was killed during a mass shooting at a Laguna Woods church on Sunday is being hailed as a hero after he tackled the gunman and attempted to disarm him, which allowed parishioners to step in and help.

During a press conference led by the Orange County Sheriff's Department on Monday, Sheriff Donald Barnes said John Cheng, a doctor who specialized in sports medicine, immediately went after the suspect as the shooting inside the Geneva Presbyterian Church on El Toro Road began to unfold.

"Without the actions of Dr. Cheng, it is no doubt that there would be numerous additional victims in this crime," said Barnes.

Barnes said according to witnesses, Cheng went straight for the suspect - who was identified as 68-year-old David Chou of Las Vegas - and took him down.

A group of congregants stepped in to help Cheng, using items inside the church to stop Chou, who was ultimately hogtied by the legs with an extension cord.

During the struggle, Cheng was shot several times. He was pronounced dead at the scene.

"The heroic actions of Dr. Cheng ... literally the meaning of good versus evil between Dr. Cheng and the suspect in this case," said Barnes.

Cheng, who was 52 years old, leaves behind his wife and two children.

"After others had been shot, he took it upon himself to charge across the room and to do everything he could to disable the assailant," said Orange County District Attorney Todd Spitzer. "He was shot, and then there was an attempt to shoot him again, but the gun jammed, and he succumbed to his injuries."

Spitzer continued, saying Cheng "sacrificed himself so that others could live."

"That irony in a church is not lost on me," he said.

Meanwhile, Chou was booked on one felony count of murder and five felony counts of attempted murder. He is being held on $1 million bail.

The Orange County District Attorney's office is expected to officially charge him on Monday.

At least one person was killed and multiple others were injured during a shooting on Sunday at a church in Laguna Woods, authorities said.

Ken Lee, 81, was inside the church with his wife at the time and told ABC News he thought the sounds of the initial gunshots were firecrackers. Lee said he was standing about 15 feet away from the suspected shooter when he began open fire from the front of the church.

"Once the gunman ran out of bullets and tried to refuel our pastor grabbed a chair and knocked him down," Lee said. "Then three or four guys came to help. One guy took off his belt and tied him to the chair. Three or four people pushed him to the floor until FBI and police came".

At least two weapons were taken from the suspect by the parishioners, officials said.

Six people were shot in total.

The injured victims, four men and one woman, are all of Asian descent and are between the ages of 66 and 92. All of them were taken to local hospitals for treatment.

It's unclear what motivated the shooting. Investigators are working to determine whether Chou has a connection to Geneva Presbyterian Church or to the congregation.

"At this time, we do not know what the suspect's motive may be or whether he had an intended target, or whether this is even a hate-related incident," O.C. Undersheriff Jeff Hallock said at Sunday's press conference. "Members from the trauma intervention program also are on scene to provide crisis counseling to the congregants."

The FBI has joined this ongoing investigation.

"First of all, my sincerest condolences to the families and the victims here today, and also a really think a heartfelt thank you to the congregants who are very brave today in their actions," said Kristi Johnson, assistant director in charge - FBI Los Angeles. "We have linguists who are going to arrive soon to assist. We have our Evidence Response Team who is on standby, and we also have our behavioral analysis unit present on scene."

"Obviously, motive is always the question, which determines the extent of involvement at the federal level, or whether federal or local prosecution is pursued," Johnson said. "And at this time we are working very hard to determine the motive."

ATF is also assisting with the investigation.

"Our agents have initiated an emergency trace on the recovered firearms," said Stephen Galloway, assistant special agent in charge, ATF Los Angeles. "Those traces are currently in progress and will be thoroughly investigated once they're complete."