The 96-year-old queen is the first British monarch to reach a Platinum Jubilee -- 70 years on the throne.
ABCNews
By Katie Kindelan via GMA 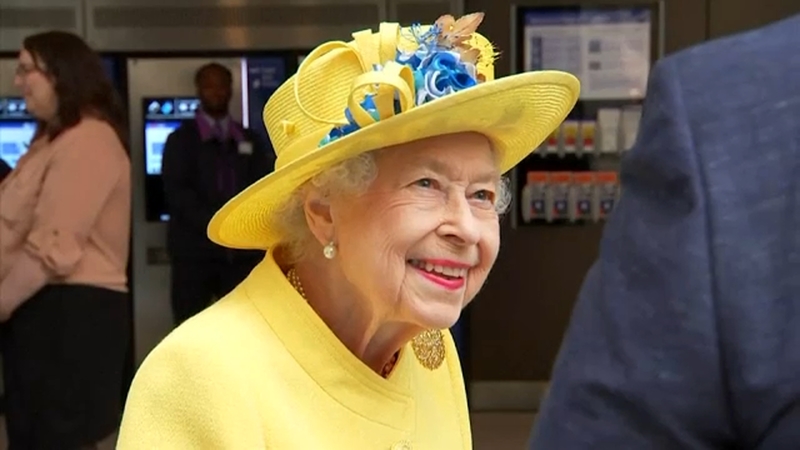 A look at Queen Elizabeth's reign ahead of jubilee celebration

LONDON -- Queen Elizabeth is being celebrated with what is being described as a once-in-a-lifetime celebration to mark her Platinum Jubilee.

The royal family and the public are taking part in festivities ranging from the traditional Trooping the Colour birthday parade to a star-studded concert to celebrate the 96-year-old queen, the first British monarch to reach a Platinum Jubilee -- 70 years on the throne.

Queen Elizabeth ascended to the throne following the death of her father, King George VI, on Feb. 6, 1952.

PHOTOS: Queen Elizabeth through the years

With celebrations underway, here is a look back at seven of the queen's most memorable moments from 70 years on the throne.

Queen Elizabeth's coronation on June 2, 1953, was the first to be televised.
The nearly three-hour service in Westminster Abbey was watched on TV by 27 million people in the United Kingdom alone, according to the royal family. 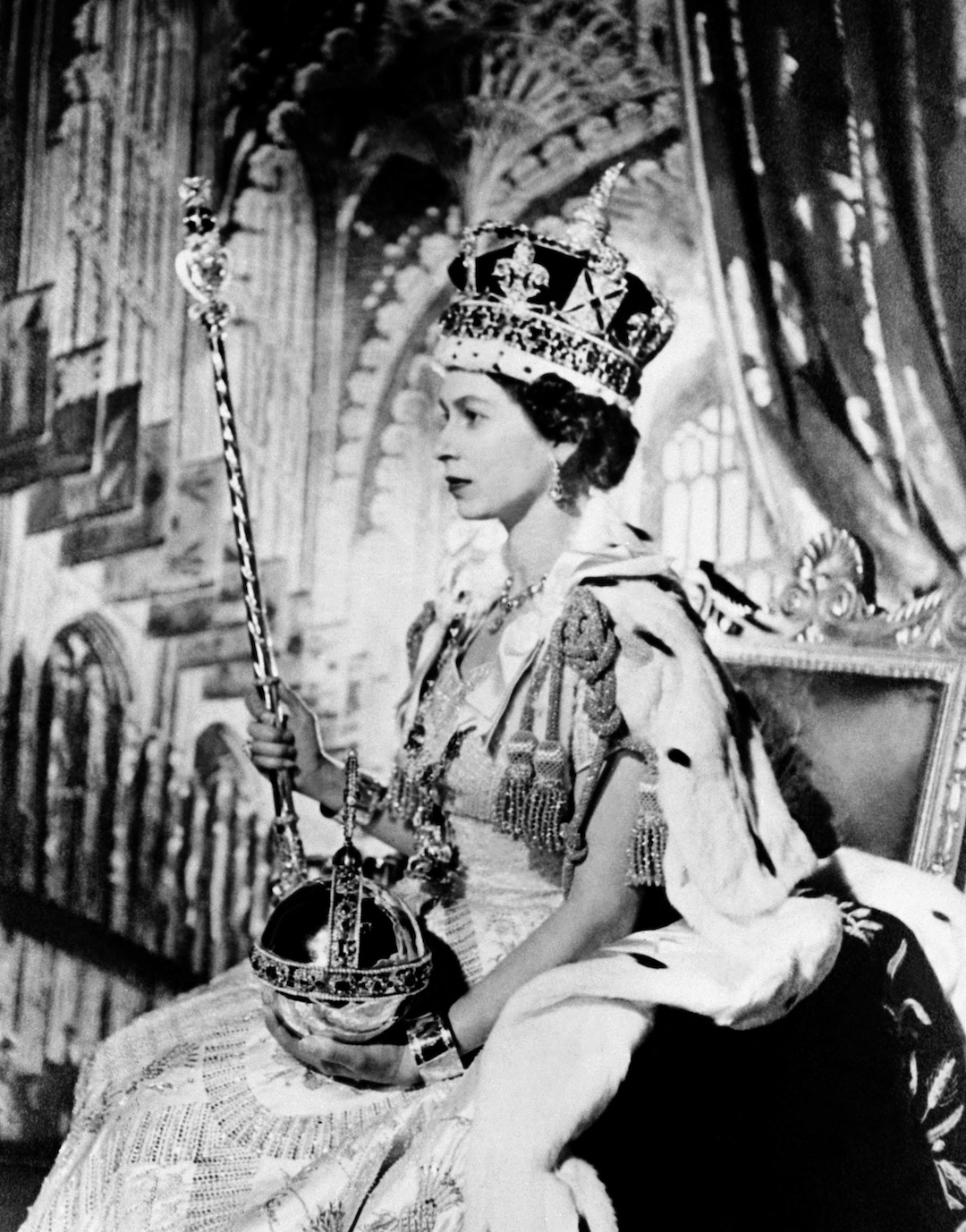 Queen Elizabeth II poses on her Coronation Day on June 2, 1953, in London.

Following the service, the queen and Prince Philip joined a 16,000-person strong procession from Westminster Abbey to Buckingham Palace.

Among the thousands of journalists covering the queen's coronation was Jacqueline Bouvier, who at the time worked for the Washington Times-Herald and would go on to become first lady of the United States alongside her husband, President John F. Kennedy, according to the royal family.

While royal watchers are used to seeing royals including Prince William and Duchess Kate greet fans at each stop they make, a practice called the "walkabout," that was not the case before Queen Elizabeth.

The queen upended royal tradition while on a tour of Australia and New Zealand with Prince Philip in 1970. Instead of waving to crowds from a protected distance, Queen Elizabeth walked out and greeted people in-person, the first royal "walkabout." 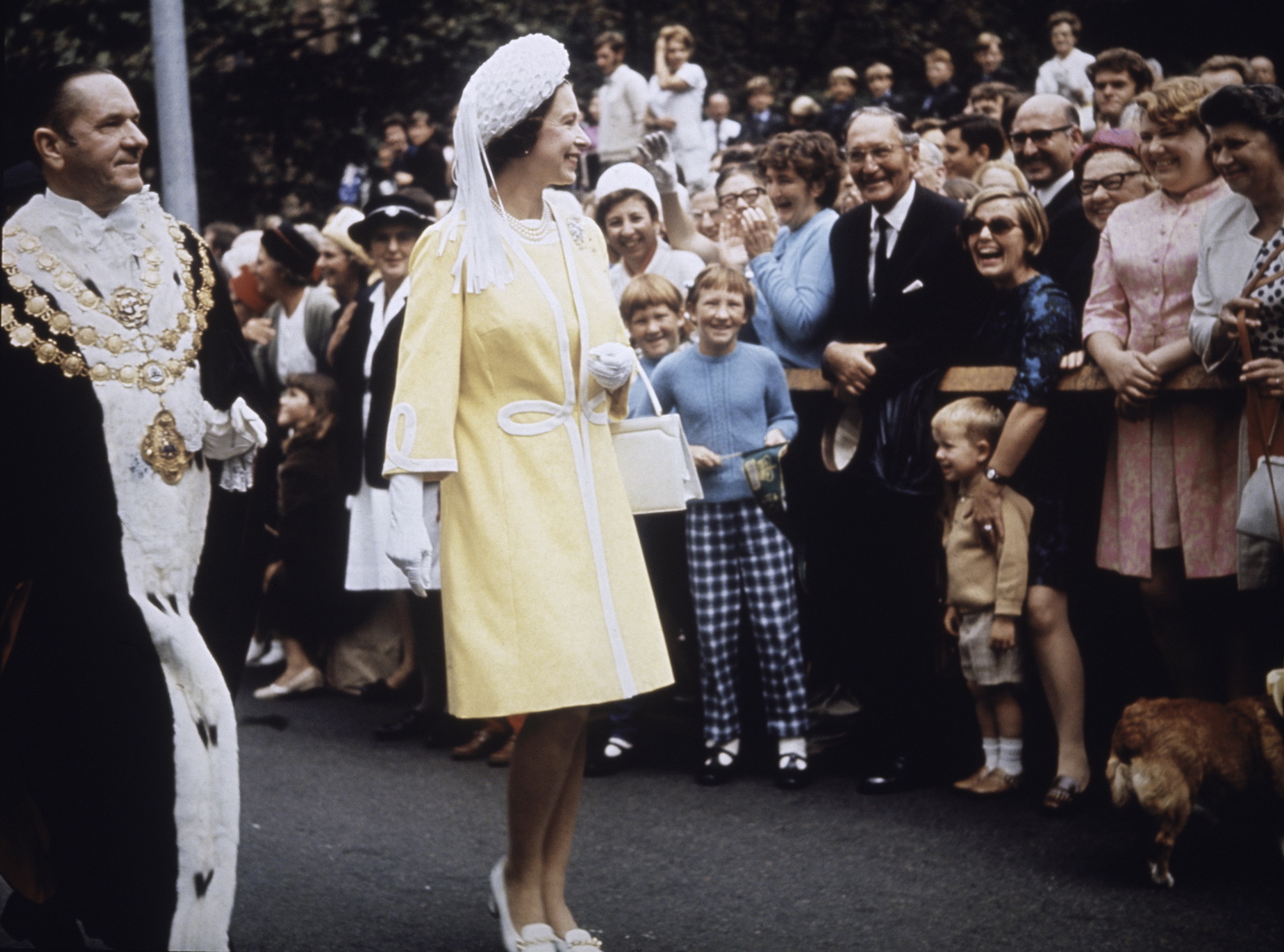 Queen Elizabeth II visits the Town Hall in Sydney with Emmet McDermott, Lord Mayor of Sydney, during her tour of Australia in May 1970.

Queen Elizabeth has met with every U.S. president during her 70 years on the throne, except for Lyndon B. Johnson.

She met with President Joe Biden last June at Windsor Castle, marking her 13th meeting with a sitting U.S. president. 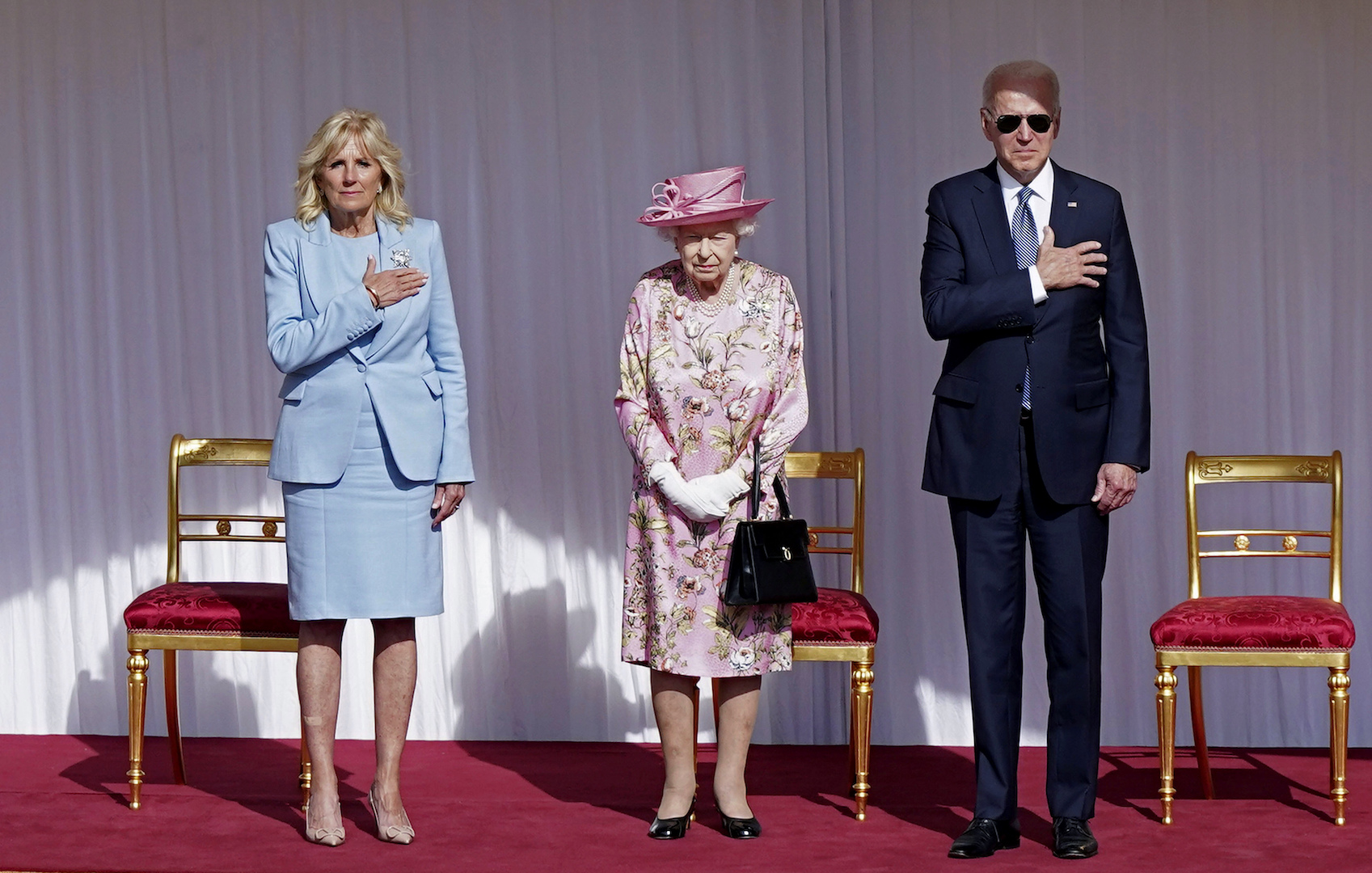 Queen Elizabeth II with President Joe Biden and first lady Jill Biden in the Quadrangle during their visit to Windsor Castle in Berkshire on Sunday, June 13, 2021. 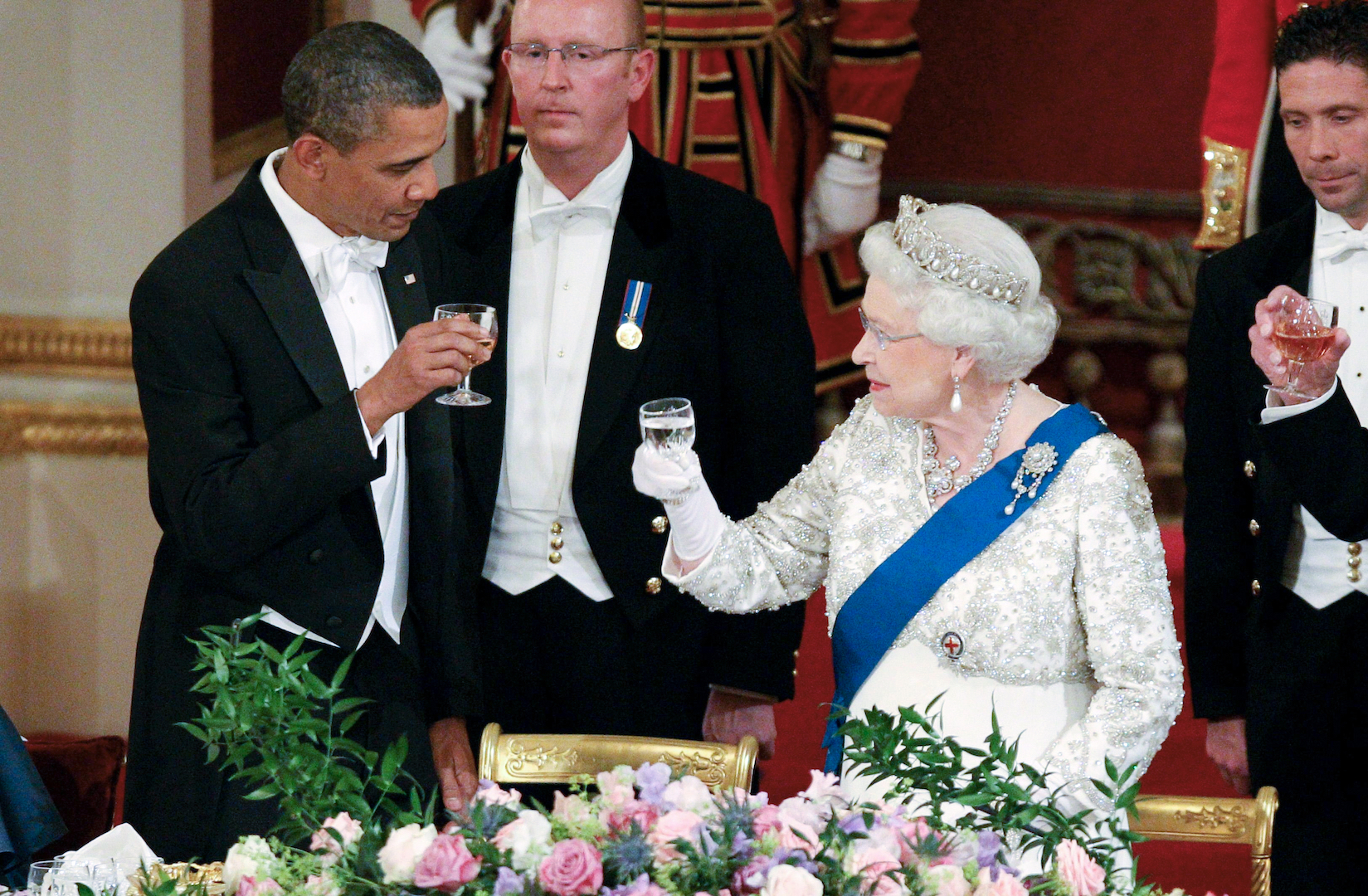 Queen Elizabeth II and President Barack Obama during a state banquet in Buckingham Palace, London, on May 24, 2011. 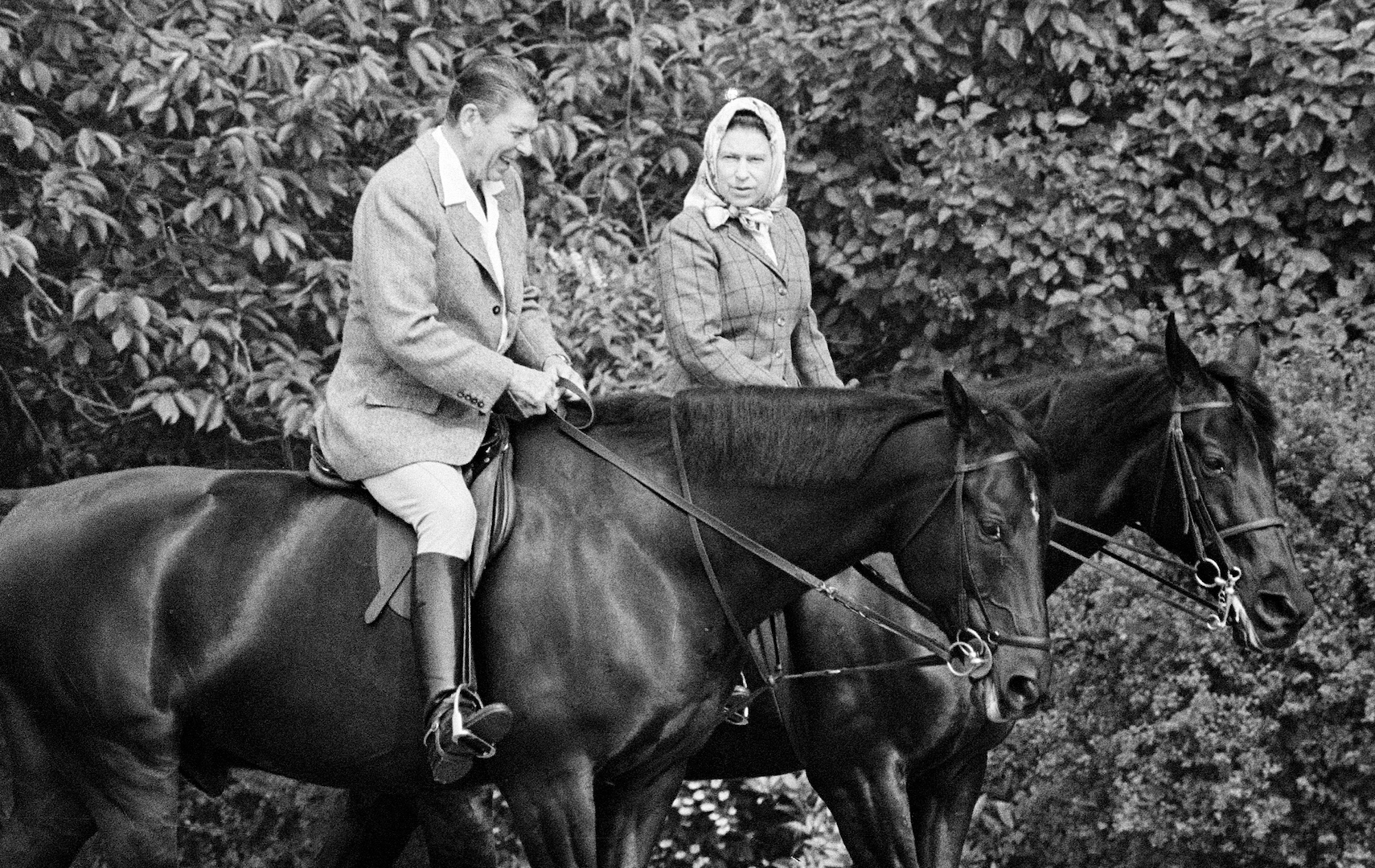 In this June 8, 1982 photo, President Ronald Reagan, left, on Centennial, and Queen Elizabeth II, on Burmese, go horseback riding on the grounds of Windsor Castle, England. 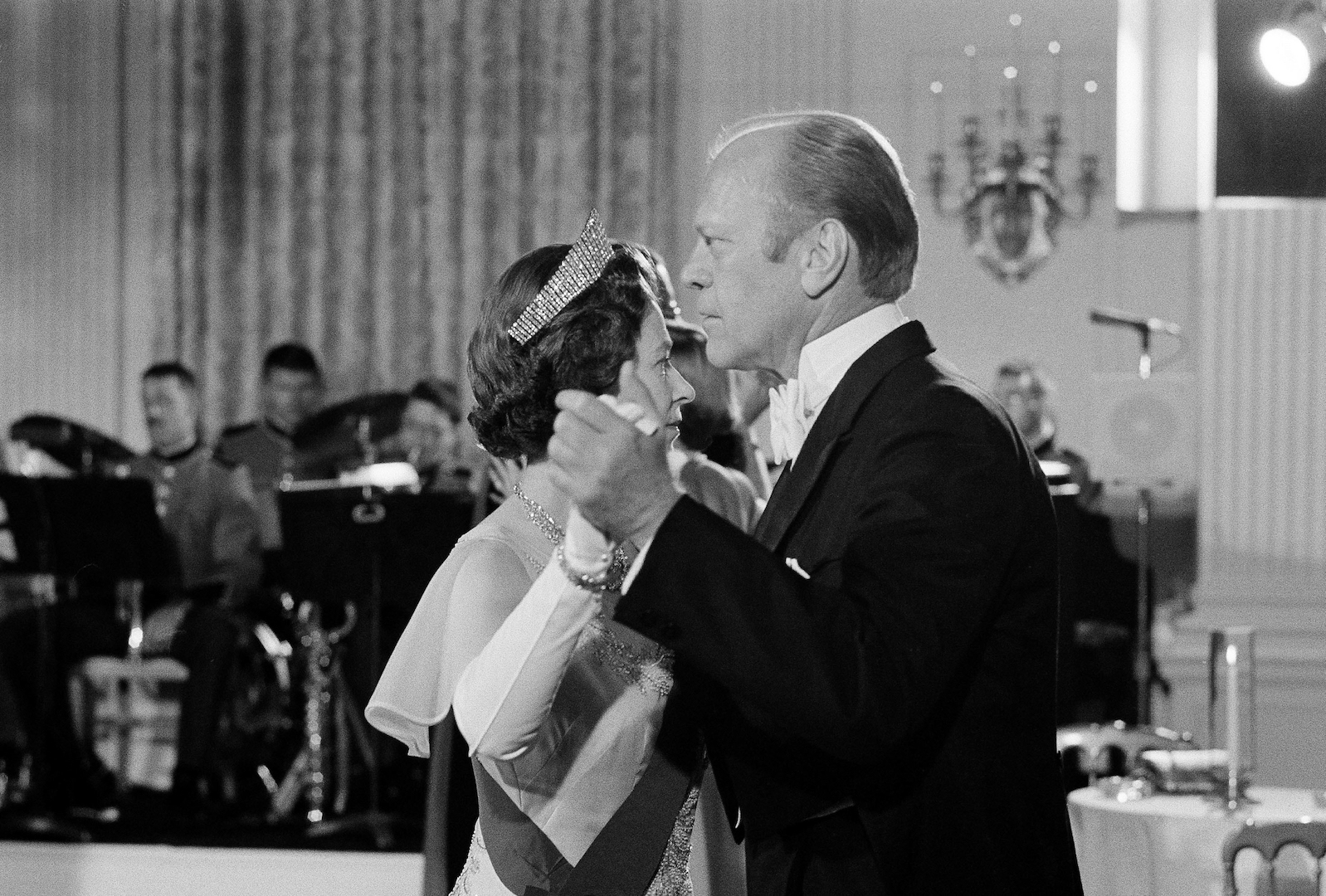 President Gerald Ford dances with Queen Elizabeth II at the White House, on July 7, 1976, following a State Dinner in the queen's honor.

4. Celebrating jubilees in a history-making reign as queen

In 1977, Queen Elizabeth celebrated her Silver Jubilee, 25 years on the throne, with a service at St. Paul's Cathedral, where she repeated her pledge to a life of service. 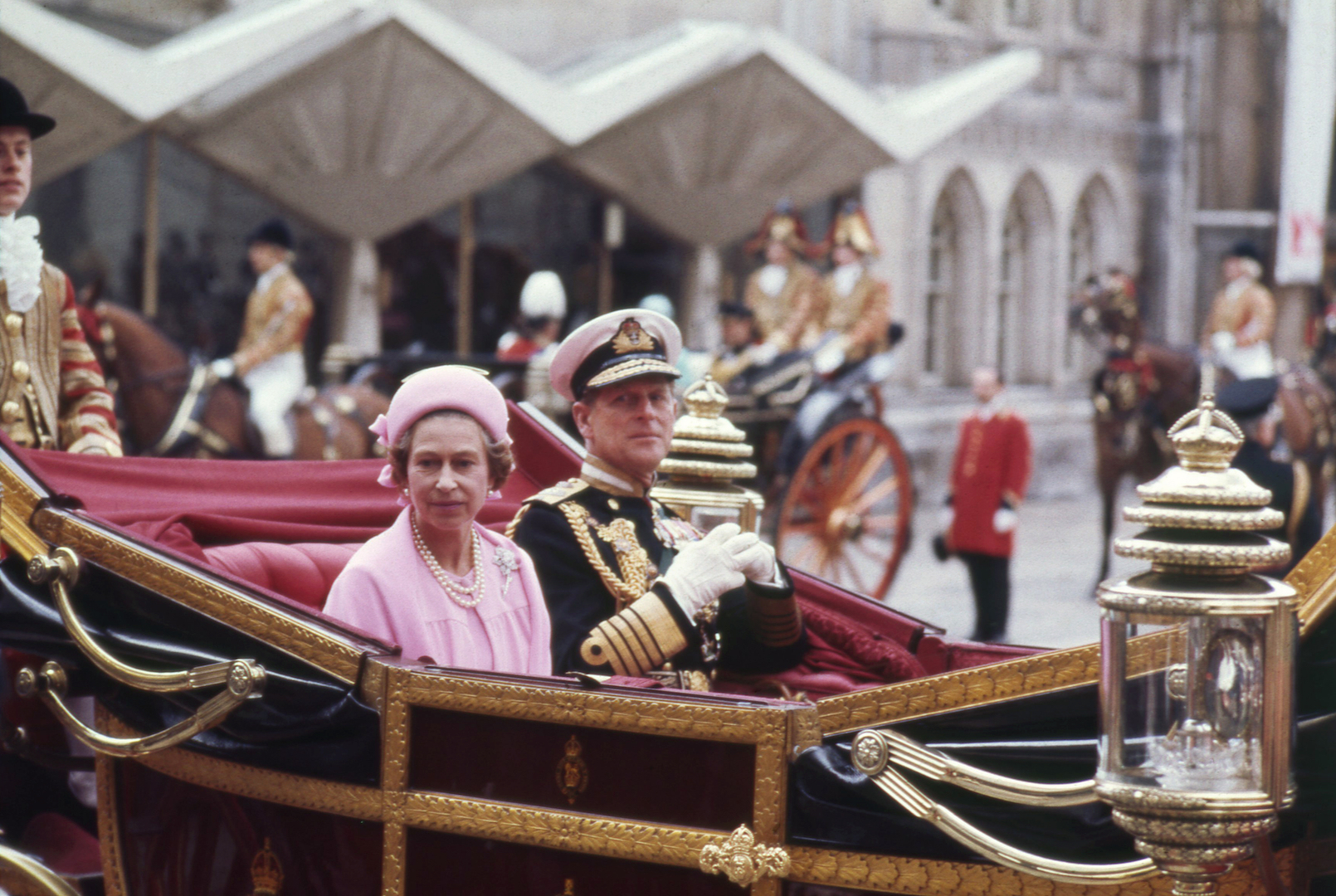 Queen Elizabeth II and Prince Philip, the Duke of Edinburgh travel in a carriage during celebrations for the Silver Jubilee in London on June 7, 1977.

More than two decades later, in 2002, -- the same year both her mother and sister passed away -- Queen Elizabeth celebrated 50 years on the throne, her Golden Jubilee. 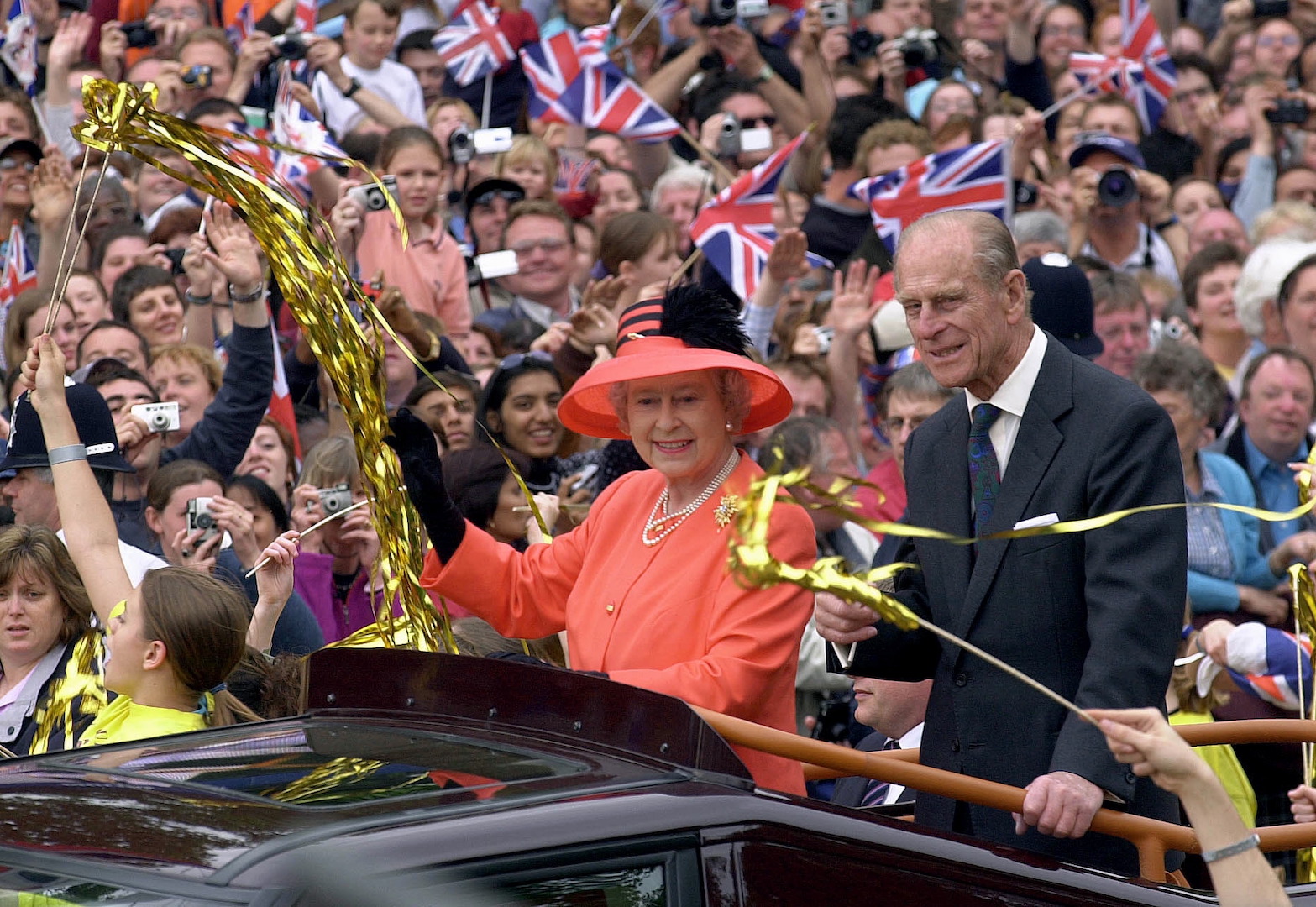 Queen Elizabeth II and Prince Philip, the Duke of Edinburgh, ride in an open-top car as they return to watch a parade celebrating Queen Elizabeth's Golden Jubilee on June 4, 2002.

The queen was escorted through the streets of London in a four-ton golden coach, previously used only when she was crowned and at her Silver Jubilee. In a ceremony that dates back almost 800 years, she touched a sword handed to her by the Lord Mayor of London, symbolizing the supreme power of the monarch.

In June 2012, Queen Elizabeth celebrated 60 years on the throne, her Diamond Jubilee, with a parade down the Thames and a concert outside Buckingham Palace. 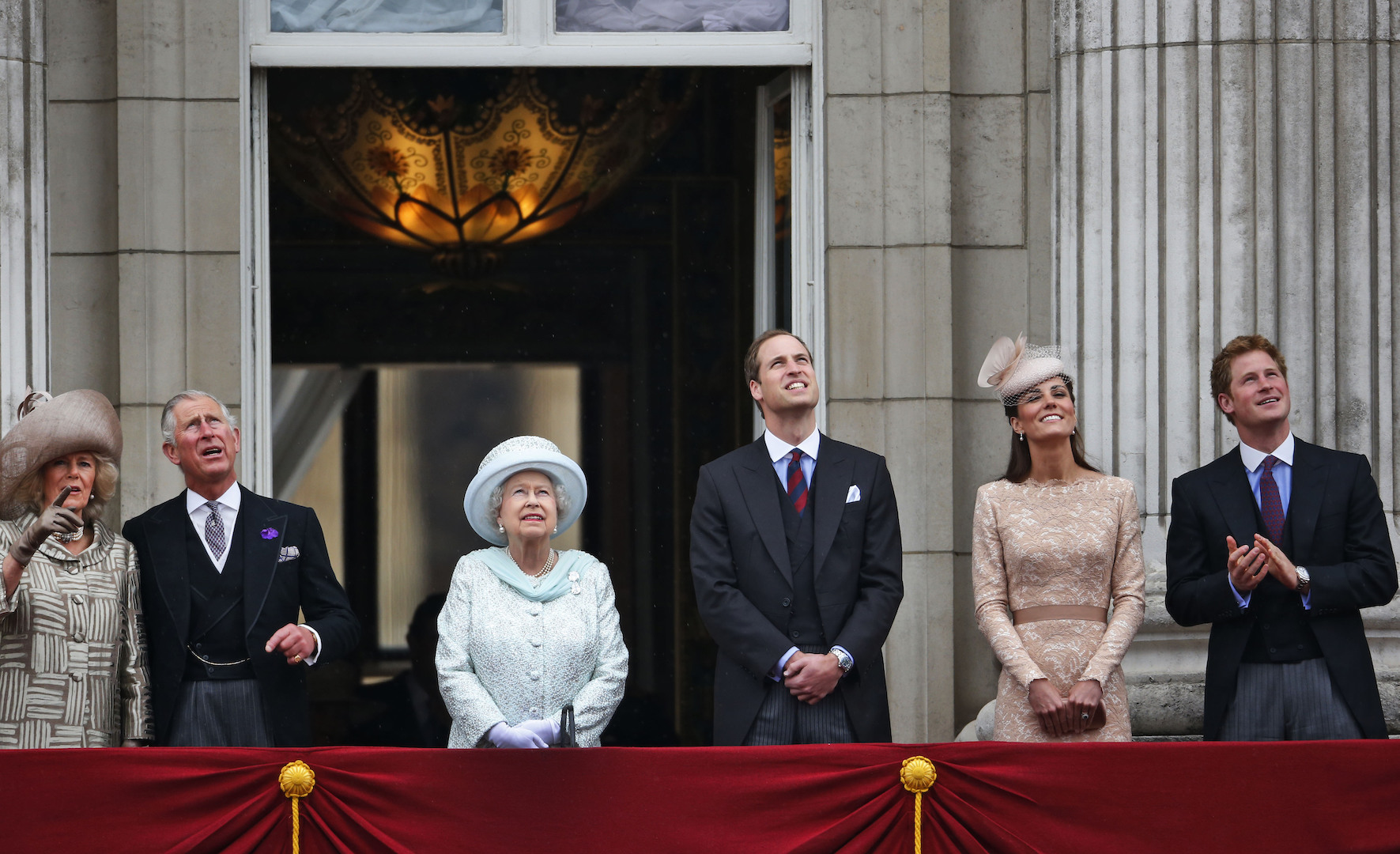 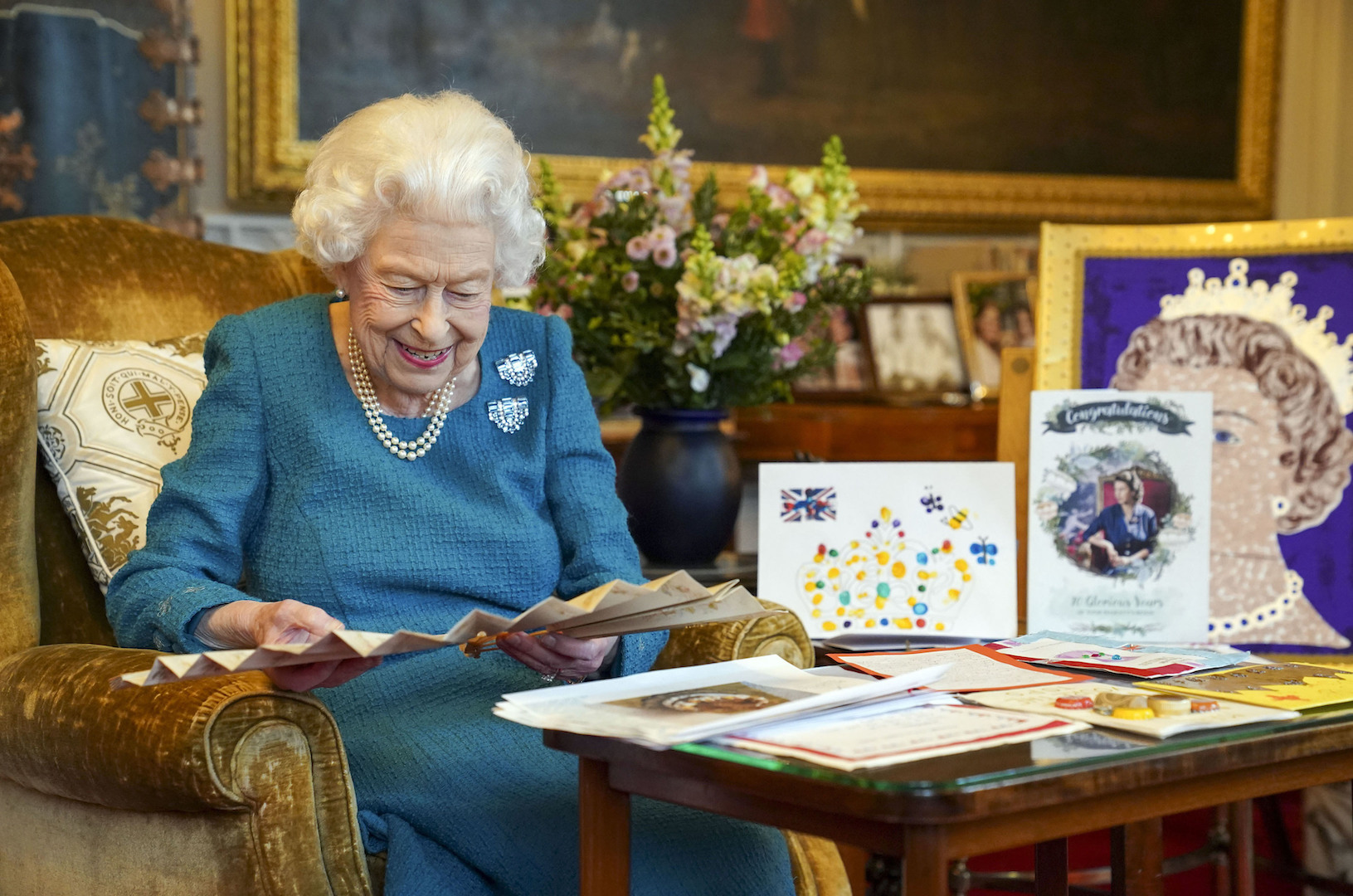 Queen Elizabeth II looks at a fan as she views a display of memorabilia from her Golden and Platinum Jubilees in the Oak Room at Windsor Castle on Feb. 4, 2022.

5. 'Parachuting' into the London Olympics with James Bond

The same year as her Diamond Jubilee, in 2012, Queen Elizabeth memorably starred alongside actor Daniel Craig in a clip that aired during the opening ceremony for the 2012 Summer Olympics in London.

A night to remember when Daniel Craig appeared as James Bond to accompany her Majesty The Queen to the Opening Ceremony of the London 2012 Olympic Games! pic.twitter.com/C174bSyKkq

The queen portrayed herself in the clip, which featured Craig, as James Bond, picking her up at Buckingham Palace. Stunt actors then portrayed the two helicoptering across London and parachuting into the Olympics venue, while Queen Elizabeth herself arrived at her seat, accompanied by Prince Philip. 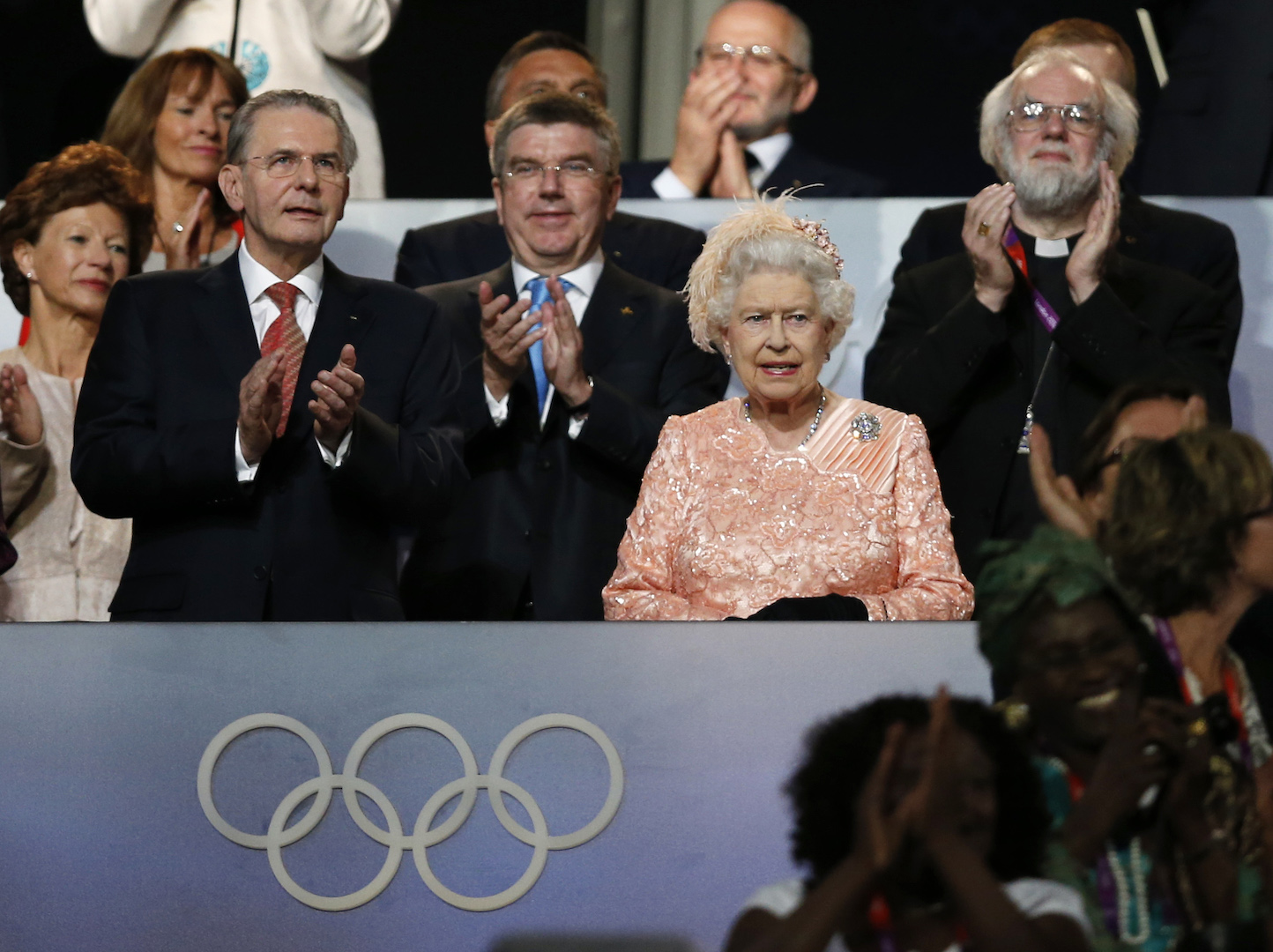 Queen Elizabeth II watches the Opening Ceremony at the 2012 Summer Olympics, on July 27, 2012, in London.

6. Serving as matriarch of a growing royal family

Queen Elizabeth has been an omnipresent force not just on the world stage, but also within her own family.

The queen, a mother of four, is the matriarch of an ever-growing family, which now includes eight grandchildren and 12 great-grandchildren. 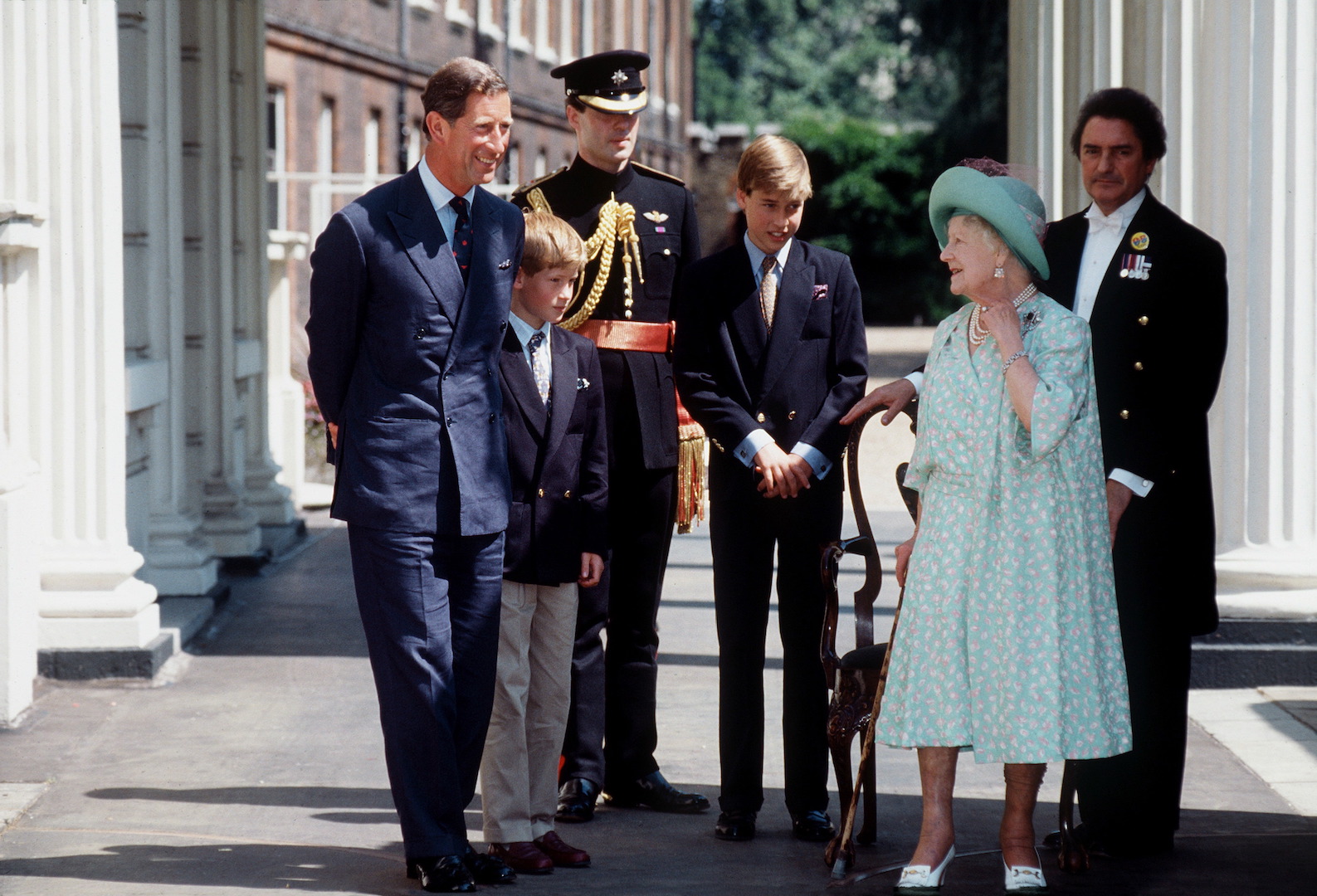 She has been present for weddings, as well as divorces that made headlines. 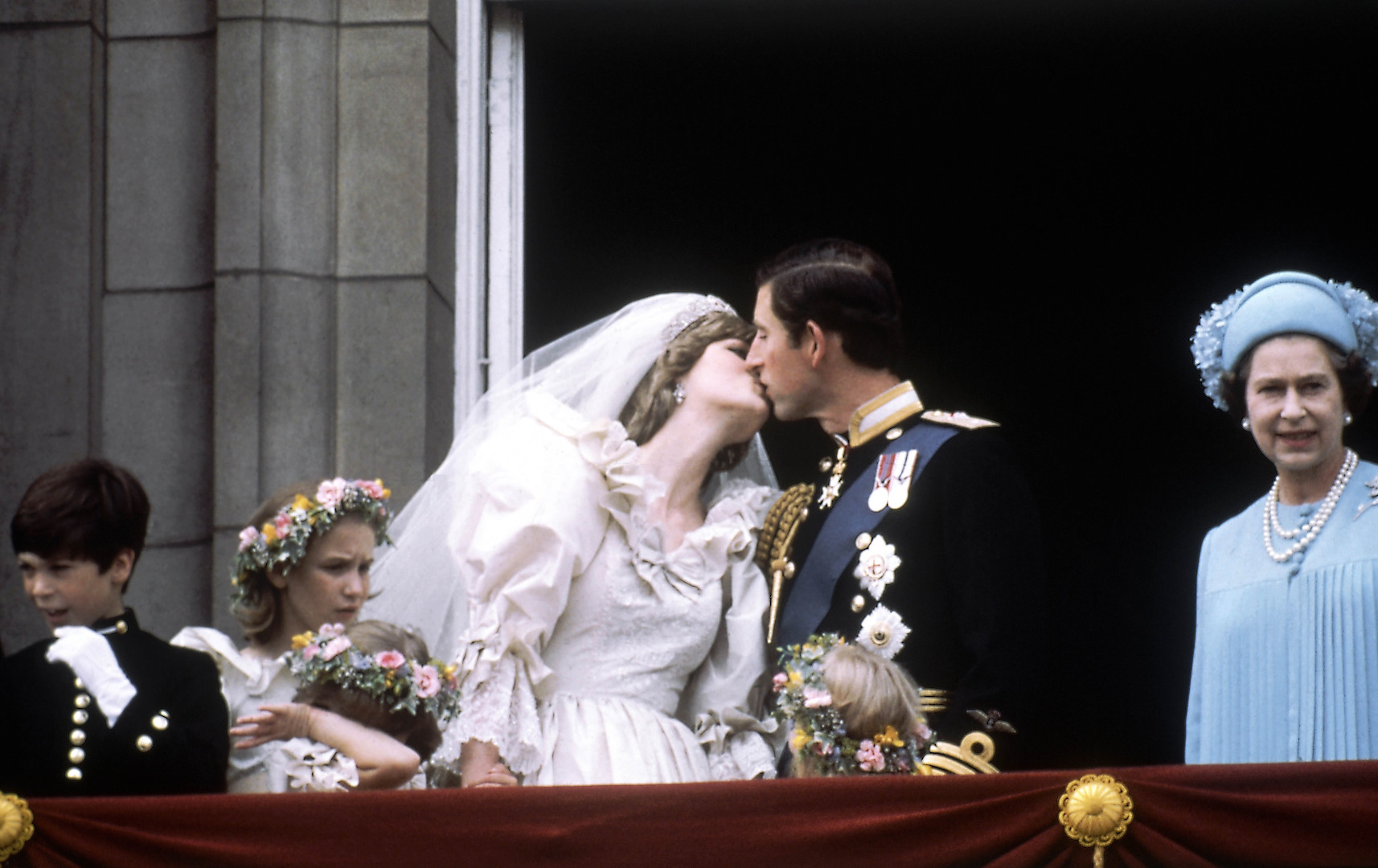 Prince Charles kisses his bride, Diana Spencer, the new Princess of Wales, at Buckingham Palace in London on July 29, 1981, after their wedding. Queen Elizabeth stands at right. 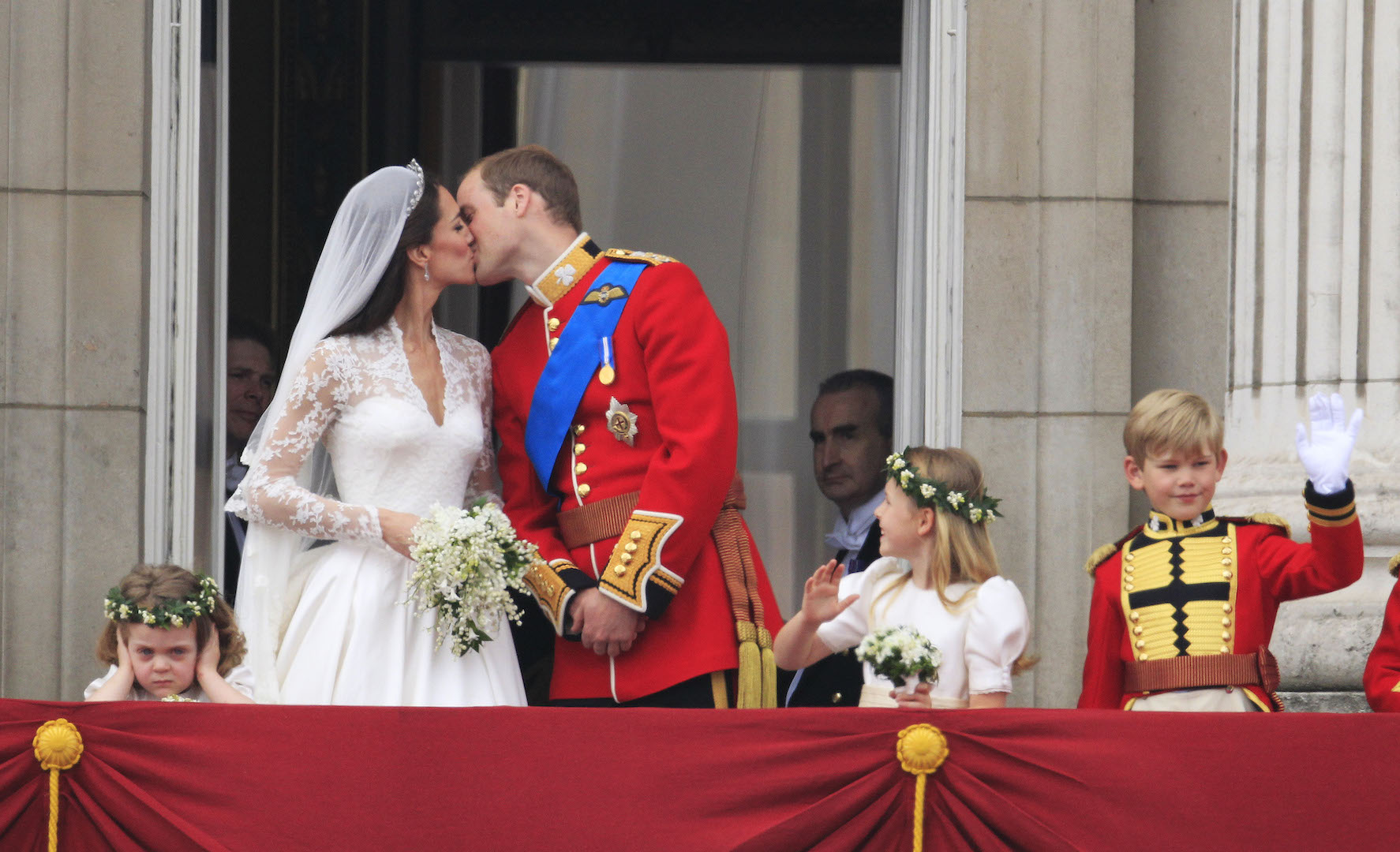 Britain's Prince William kisses his wife Kate, Duchess of Cambridge on the balcony of Buckingham Palace after the Royal Wedding in London Friday, April, 29, 2011.

She has also guided her family through scandal and discord, most recently amid a lawsuit against her son Prince Andrew, as well as the exit of her grandson Prince Harry and his wife, Duchess Meghan, from their senior royal roles.

7. Saying goodbye to her husband of 73 years

Queen Elizabeth faced a deeply personal and sad moment in her reign last April when she said goodbye to her husband, Prince Philip, following his death at age 99.

Due to restrictions amid the coronavirus pandemic, the queen sat alone during the April 17, 2021, funeral service for Philip, her husband of 73 years.

Prince Philip was laid to rest in a funeral ceremony that honored his lifetime of service to the country, the crown and his wife of 73 years, Queen Elizabeth II.

Known as one of the hardest-working members of the royal family, Philip, the Duke of Edinburgh, was also a stalwart supporter of his wife.

"He is someone who doesn't take easily to compliments, but he has, quite simply, been my strength and stay all these years," Queen Elizabeth said in 1997, paying tribute to her husband on their golden wedding anniversary. "And I, and his whole family, and this and many other countries, owe him a debt greater than he would ever claim, or we shall ever know."

BBC Radio recorded and broadcasted Princess Elizabeth and Philip's ceremony to 200 million people around the world.