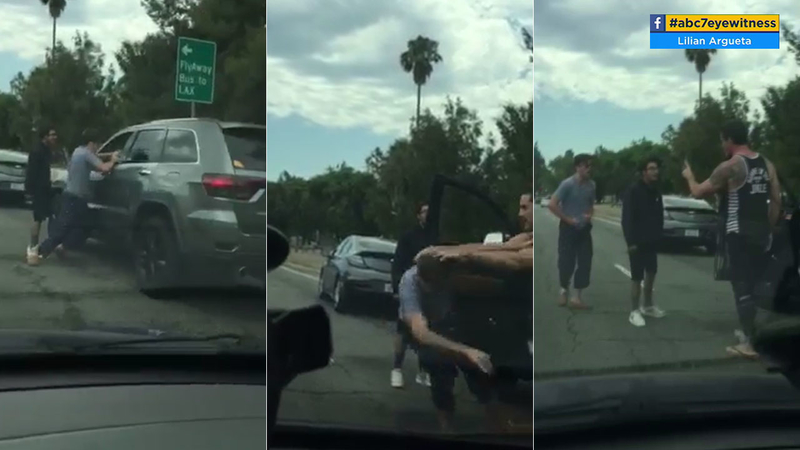 RESEDA, LOS ANGELES -- Punches were thrown between drivers in another case of apparent road rage in Los Angeles on Saturday.

Cellphone video shows a man reaching into the window of another car and throwing repeated punches at the driver - then being thrown to the ground after the driver, a larger man, gets out of his vehicle.

The incident happened Saturday afternoon when a Chevrolet sedan and an SUV pulled over on Victory Boulevard in Reseda near the Sepulveda Basin.

The driver of the Chevrolet is seen reaching into the open window of the SUV and throwing multiple punches at the driver.

Witness Lilian Argueta, who was driving behind the two cars when the incident happened, said it appeared the SUV driver restrained himself from throwing any punches.

"Obviously the guy was way bigger than him," she said. "If he wanted, he could've done something else. But he didn't. He just gave him a little push and that's when the other guy fell."

The Chevrolet driver then takes a few steps back and continues to yell, but eventually gets back into the sedan with his friend and they drive away.

Argueta said it may have started when the driver of the Chevrolet thought he had been cut off. She saw him race across several lanes of traffic on Victory and yell at the SUV driver before they both pulled over.

The SUV driver had some redness on his neck and forehead from the punches afterward, she said. Neither vehicle appeared to have any damage.