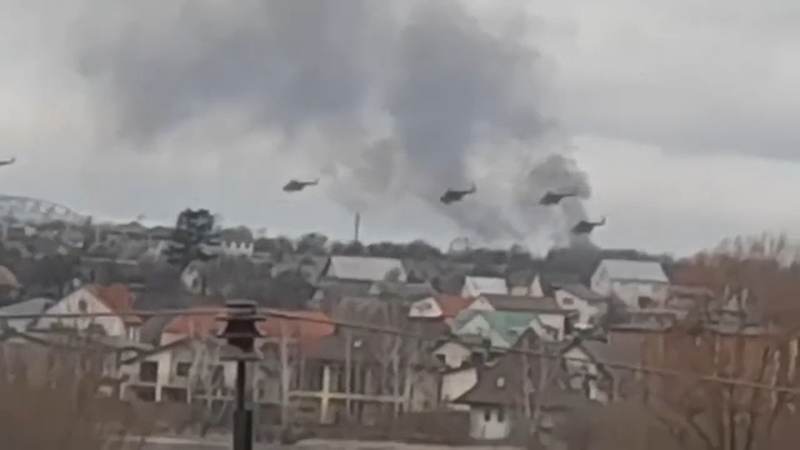 FRESNO, Calif. (KFSN) -- This conflict may be thousands of miles away but for so many in the Central Valley, it is hitting close to home.

Members of the Ukrainian community are together praying for peace and encouraging everyone to stay informed.

The Central Valley is home to more than 6,000 people who can trace their roots back to Russia and Ukraine, according to the U.S. Census Bureau.

For Dr. Malko, the conflict in her homeland of Ukraine is more than an addition to her lesson plan.

She says, "It's very hard. Sometimes, I'm on the verge of crying and it's hard to collect thoughts."

Dr. Malko adds, "My father sounded a little bit distraught. Of course, it was great shock."

Both of her parents survived what's known as the great terror.

"They grew up with these experiences of violence, war and they could never imagine that in their children's generation, we would have to face another war," she added.

RELATED: Russia invades Ukraine on many fronts in 'brutal act of war'; 57 Ukrainians killed in invasion

Dr. Malko was born in Ukraine and came to the United States as a graduate student at Fresno State. She has used her work to educate others about Ukraine's history, saying it plays a role in the tensions we see today.

The declared state of emergency means people are now staying in their homes or trying to evacuate.

"The society is paralyzed because offices are closed, people are required to stay home. Don't go outside, which means everything has stopped for modern society. It's a huge economic loss and a hit to morale. That's what Putin wants to achieve," said Dr. Malko.

The Central Valley is home to more than 6,000 people who can trace their roots back to Russia and Ukraine, according to the U.S. Census Bureau.

Fresno State political science professor Nataliia Kasianenko has been watching the unsettling images from her home country in disbelief.

"Nobody in their wildest nightmares would actually think that Russia would mount such a full-scale attack, such an aggressive action against the people of Ukraine," she said.

Her parents and much of her family are in eastern Ukraine, about 40 miles from the Russian border. She says they are finding it difficult to find a safe place to hide underground as they continue to hear explosions around them.

Kasianenko says as an American, she fears US military involvement. But as a Ukrainian, she wants to see American leaders double down.

Thousands of miles across the world from where civilians are hiding from explosions, the congregation at House of the Gospel in southeast Fresno will continue praying for their family and friends caught in the middle of the conflict in Ukraine.

Pastor Alex Ivanov was born in Ukraine and says 70 percent of the people who attend his church are Ukrainian too. There's also a large Russian population at the church.

"Our church building is ready to receive any refugees, anyone who might need a place," he said.

Father Gregory Zubacz, pastor of the Ukrainian Greco catholic apostolate of the archangel Michael is not only praying for peace, but he's also encouraging members of his congregation and the community to stay informed about the invasion and President Putin's actions.

He adds, "The Ukrainian nation is resilient and it always comes back."

Fr. Greg went on to say Sunday after mass, they plan to have a service to pray for peace in Ukraine.

They are working to organize a public event to support the nation under siege, adding when it comes to donating, make sure you are donating to a reliable charity.