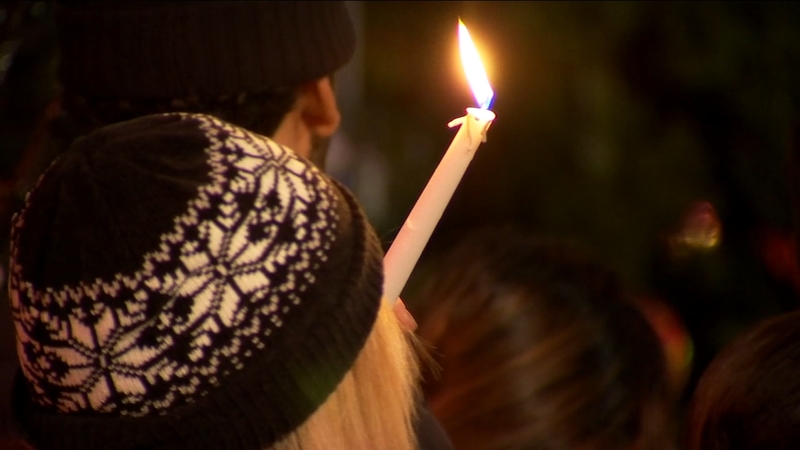 NEWMAN, Calif. (KFSN) -- Blue ribbons lined the main street of downtown Newman, California, the city where Ronil "Ron" Singh served as a police corporal, and which came out in hundreds on Friday evening to mourn the slain officer

Singh was shot and killed by a man during a traffic stop on Wednesday morning. Police arrested 33-year-old Gustavo Arriaga on Friday morning for the killing.

The city poured into the downtown Plaza Square to remember the seven-year veteran of the Newman Police Department, holding lit candles as his wife, 5-month-old son and his K-9 Sam were escorted in by police.

It was the stories from people in the community - like Tracey Taylor - that brought most to tears.

Her story was about the tragic 911 call that Corporal Singh responded to at her home.

"About 4 month ago, our daughter committed suicide and your husband was the first one at our home... I know how hard it was for him to get through what he had to see and I don't think if it was for him we wouldn't gotten through that time," she said.

But through the piercing heartbreak, there were moments of laughter as Corporal Singh's coworkers shared the fun side of the seven-year veteran on the force.

"He would purposely drive by my house since I lived down the street from him, just to scare my wife, and then he would text her and start laughing and say, 'Did I scare you?'" one co-worker said.

That humor was also coupled with kindness, something his Sergeant witnessed firsthand -- after Singh learned he had never flown on a plane and taken a vacation.

"Without hesitation and without asking for anything, he literally threw his credit card on my desk and told me to book one. That was the embodiment of Ronil Singh," he said.

Many felt the connection went far beyond the badge.

"He was a friend to everyone on Facebook and even in person, he was very close to the community. He had a good time watching my four-year-old playing with Sam. During the last talk we had, he said he was coming over with Sam so my kids could play with him. We will miss him a lot and Newman will never be the same," said Lupita Quirarte, a Newman resident attending the vigil.

His brother said he loved his city.

It was apparent just by the outpouring of support that Singh made a long last impression on the community.

There were also lots of blue ribbons and blue lights around the city, another sign of support for the fallen officer.

Alex Chavez came by to honor his service.

"We lost someone whose job was to protect us and I came out to pay my respects to him and his community," Chavez said.

12-year-old Chase Lobo delivered a bouquet of flowers with his mother.

"To pay my respects to the officer," he explained.

Doreen Wall came from the nearby city of Tracy to show her support to the people of Newman, and said she believes the arrest of the suspect will provide some relief.

"I don't know if it will bring closure but it will bring some peace and comfort to the people in this town to know he is not still out there," she said.

Doreen's husband, Mickey, said he was impressed by how law enforcement tracked and caught the suspect.

"When they talked about staking out the places he would show up and vehicles they were waiting for to show up - and sure enough there's the car they've been waiting for and it didn't take too long to find him."

RELATED: How agencies across California came together to nab alleged cop-killer Arriaga

In Newman, the mourning will continue, but Kimberly Lobo said the arrests of a suspect in the murder is helping the community cope.