A total of seven other people who, authorities believe, misled law enforcement about his whereabouts or aided him in fleeing were also arrested.

The suspect's brother, 25-year-old Adrian Virgen, and a co-worker, 32-year-old Erik Razo Quiroz, were also arrested on "accessory after the fact" charges for attempting to protect Arriaga. Authorities say both men are also in the country illegally.

Another brother of Arriaga, 34-year-old Conrado Virgen Mendoza from Chowchilla, and Arriaga's girlfriend, 30-year-old Ana Leyde Cervantes of Newman, were arrested on Friday for aiding Arriaga in evading authorities following the murder of Corporal Singh, Stanislaus County Sheriff's Department said on Friday night. Their booking photos were released, along with that of Arriaga.

RELATED: How agencies across California came together to nab alleged cop-killer Arriaga

Stanislaus County Sheriff Adam Christianson says that Arriaga was attempting to make his way to Mexico when he was arrested. He was found at a house in Lamont, California that was being monitored by law enforcement.

RELATED: Officer's death could be avoided if not for California's sanctuary law, says sheriff

According to Kern County Sheriff, when SWAT deputies surrounded that home, Arriaga surrendered without incident. Three additional people were arrested from the house for aiding and abetting, they include 59-year-old Bernabe Madrigal Castaneda, 36-year-old Erasmo Villegas and 57-year-old Maria Luisa Moreno.


Sheriff Christianson says that Arriaga was a member of the Sureños street gang and had been arrested twice before on charges of driving under the influence of alcohol. 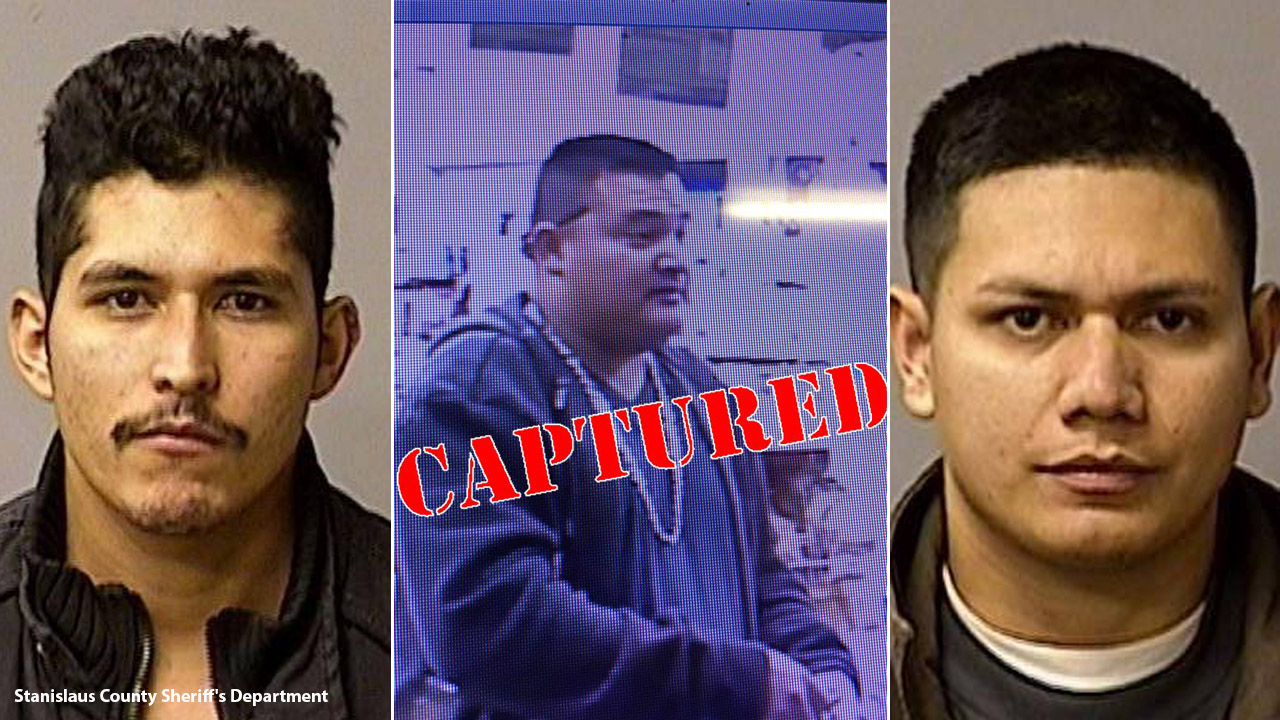 This is a triple-split photo of Erik Razo Quiroz, Gustavo Perez Arriaga and Adrian Virgen, who were arrested in connection with the fatal shooting of a Newman police officer.

The Sheriff said that Arriaga crossed into Arizona from Mexico illegally a couple of years ago and it is believed that he had been working on farms in California's Central Valley.

Reggie Singh, brother of fallen Newman Police Corporal Ronil 'Ron' Singh, tearfully thanked deputies after an arrest was made in the case.

Arriaga is accused of killing Corporal Singh when he conducted a traffic stop on Arriaga's pickup truck in the small town of Newman early Wednesday morning, for suspicion of driving under the influence.

As he pulled over the vehicle, Corporal Singh described it to dispatchers as a silver Dodge Ram with paper plates from AR Auto, a dealership in the city of Merced.

Several deputies from both Stanislaus and Merced counties responded, where they found the truck and suspect gone and Corporal Singh lying on the ground. He was rushed to a nearby hospital but died from his injuries.

That set off a statewide search for the suspect and his truck. Law enforcement quickly released surveillance video from a store showing the suspect.

The truck was found outside the city of Newman in a mobile home park on Wednesday afternoon, but the suspect was not found in the area.

The following pictures of the suspect including a name & birth date have been circulating on social media. We can confirm these are pictures of the man who murdered Corporal Ronil Singh. We CANNOT, however, confirm that the correct name or birth date is being put out. pic.twitter.com/cSCvE1DhEF

On Thursday, President Donald Trump commented on the suspect's immigration status in a tweet, "There is right now a full scale manhunt going on in California for an illegal immigrant accused of shooting and killing a police officer during a traffic stop. Time to get tough on Border Security. Build the Wall!"

There is right now a full scale manhunt going on in California for an illegal immigrant accused of shooting and killing a police officer during a traffic stop. Time to get tough on Border Security. Build the Wall!

The victim, Corporal Ronil "Ron" Singh, was a K-9 officer with the Newman Police, a small department with just about a dozen sworn officers.

Newman Police Chief Randy Richardson remembered Singh as an "American patriot" who came to the U.S. from Fiji to become a police officer and loved his wife and 5-month-old son dearly.

At an emotional news conference on Thursday, Newman Police Chief Randy Richardson remembered Cpl. Ronil Singh as an "American patriot" who came to the U.S. to become a police officer and loved his wife and 5-month-old son dearly.

A vigil was held in the city of Newman for Corporal Singh. People from the city and even from outside paid tribute to the fallen officer, accompanied by lights, flowers and blue ribbons.

Singh's wife and his K-9 partner Sam attended the vigil.

A memorial fund has been set up for Corporal Singh. Donations can be made in several different ways: