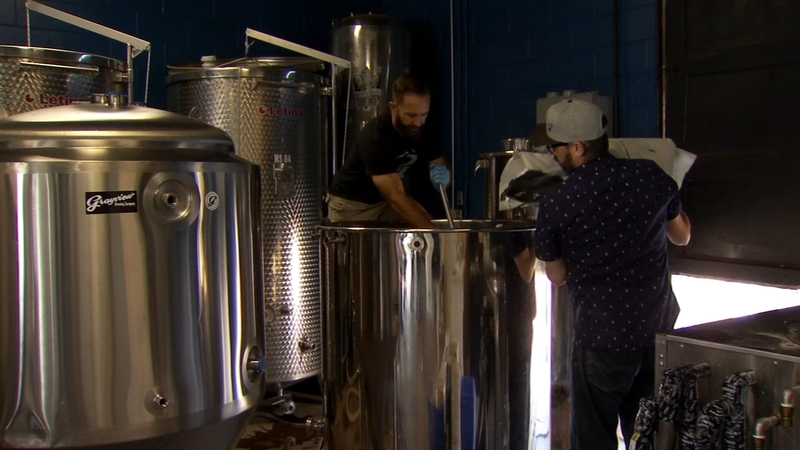 FRESNO, Calif. (KFSN) -- It takes just the right amount of mixing and mashing to create a tasty IPA beer.

The owners of Grayview brewing have taken their homebrew to the next level and are brewing on a bigger scale.

"We're not going to quit our day job but this is our other passion in life that keeps our primary profession going strong. Why are we doing this? 'Because we actually love beer and we love the social aspect of sharing it," said Jason Gray of Grayview brewing company.

Grayview is a new brew company in Fresno that gives back to non-profits.

In Downtown Fresno, the brewery district is expanding with more businesses and an Ale Trail.

"The craft beer is definitely something that brings people together and the breweries have done a great job of making the breweries family friendly. So it's something for everyone to come on down enjoy the atmosphere and take a look at the revitalization that's happening here in downtown," said Jordan Sanchez with the Downtown Fresno foundation chair.

The Downtown Fresno partnership has released a passport to navigate the Ale Trail. It's located at local breweries and it shows where the beer is served.

Back at Broadway 411 Ales and spirits, the brewery has been open more than a year and recently decided to launch an incubator to allow others in their doors to brew beer.

"We all have our own niche market and we cater to different people. so we all come together in a sense," said Joseph Soleno with 411 Broadway ales & spirits.

Incinerati Brewing has a passion for unique beers like their pink guava wheat beer. They say making beer is a combination of science and love.

"So definitely hop forward stuff without being one note. I really like complex things and doing experimental things using. I'm actually using some GMO yeast from Berkeley made by UC Davis scientists," said Michael Sumaya with Incinerati Brewing.

It's a passion that bringing people together over a glass.