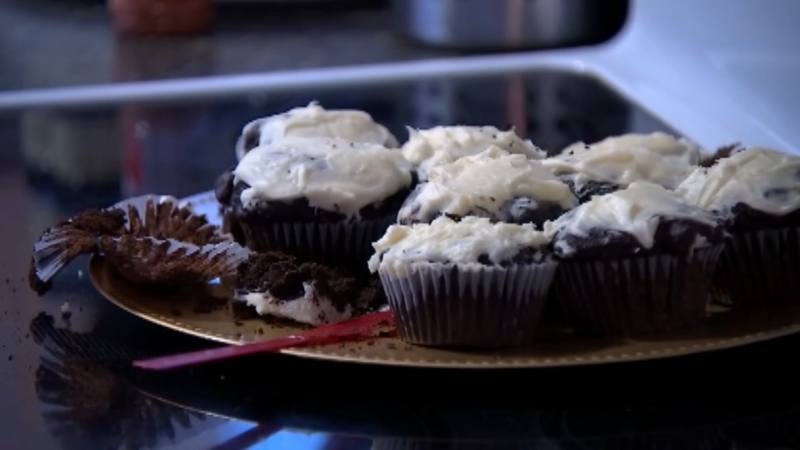 GRESHAM, Ore. -- Half-eaten cupcakes, holes in the wall, and a t-shirt wearing cat named Spaghetti made things really weird for a pair of new homeowners in Oregon.

They all came courtesy of a man hiding in their crawl space, after raiding the kitchen and laundry room.

Timothy Smith and his fiance were getting ready to move in to their new home.

"Been looking for the last year. We've been really serious about it the last three months and have jumped through so many hoops to get this place," he told KPTV.

They left their new place on off 180th and Alder in Gresham, Oregon on Monday and returned a short time later.

"We saw a bunch of stuff on our car, like a bottle of cider, a bunch of ceremonial knives and a Mac Book Pro. We're like 'that's weird' and then we come in and see all this other stuff," said Smith.

Not only that, but inside - holes in the walls.

"Kind of like he was looking for money in the walls," said Smith.

And someone had been in the kitchen.

"The cupcakes were in the fridge. He ate two, and just the bottom of one. The coffee cup he used is this one right here," said Smith.

They could hear something rustling in the crawl space, so Smith went in. That's when he says he saw a cat wearing a t-shirt.

"No one is going to put a shirt on a cat and leave it in a crawl space in a random house. Someone else is down here," he said.

Smith got out of the there and ran outside.

"I started screaming, 'Stop! Have them send someone here right now, someone is in the house 100%.'," he said.

Gresham Police got there quickly, making contact with the man in the crawl space, and got him out peacefully.

"Sure enough, he walks out. He's wearing my fiance's onesie, covered in dirt," said Smith.

Police identified the suspect as Ryan Bishop. He now faces several charges, including burglary and theft.

As for those new home owners, they're cleaning up. And Smith had a message for the suspect.

"I've been where that dude was. Don't ever feel like you're unhelpable. Help is always out there for you. Just find the right sources," he said.

The onesie Bishop was wearing was actually a pair of Christmas pajamas.