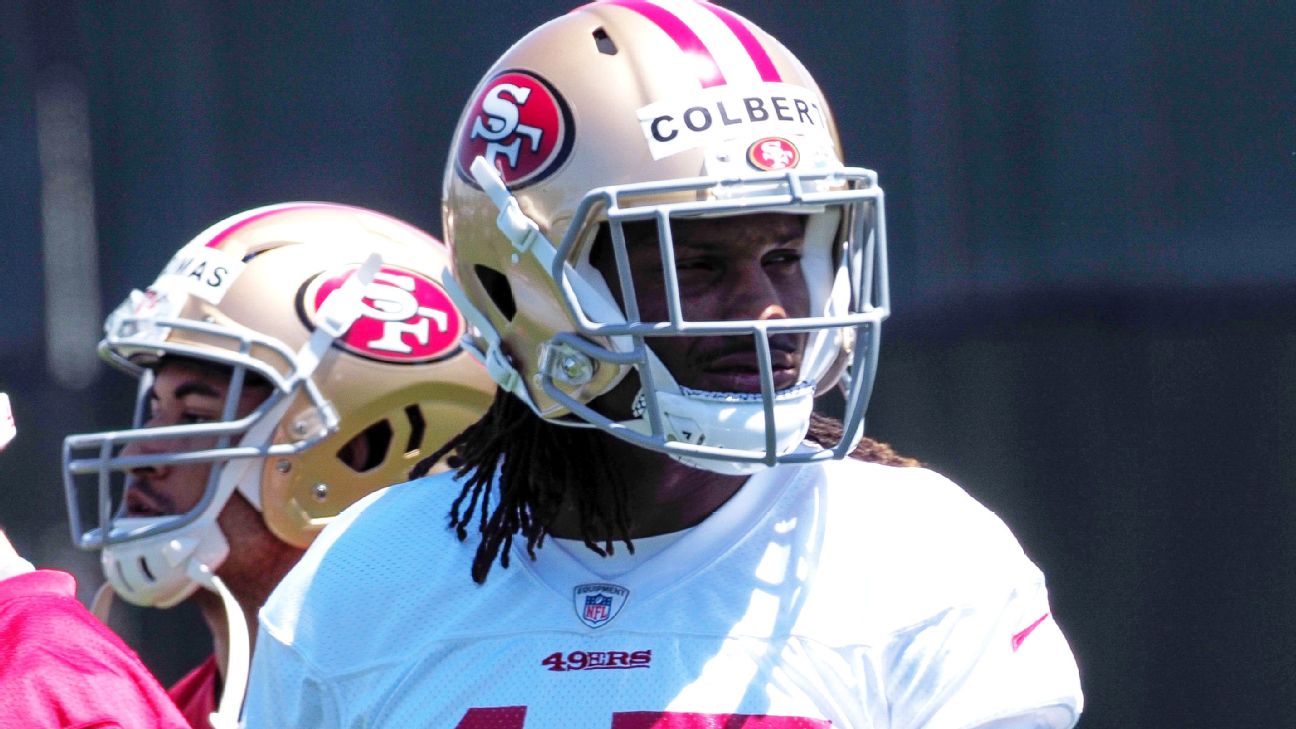 SANTA CLARA, Calif. -- After a flurry of injuries in the San Francisco 49ers' secondary late in the 2017 season, Adrian Colbert stepped into the starting free-safety job and played well enough to claim it on a permanent basis.

Now, just seven weeks into Colbert's first year as the full-time starter, Colbert's season is almost certainly over. On Monday, 49ers coach Kyle Shanahan said the team is placing Colbert on injured reserve with a high right-ankle sprain, an injury he suffered in the third quarter of Sunday's loss to the Los Angeles Rams.

Shanahan said Colbert is expected to miss six to eight weeks, and though that time frame would allow the possibility for Colbert to be one of the team's short-term injured reserve candidates, Shanahan said the 25-year-old would "probably not" come back this season.

The Niners re-signed quarterback Tom Savage to take Colbert's spot on the roster. Savage signed with San Francisco last week but was released to make room for defensive back Tyvis Powell because of multiple injuries in the secondary.

With 11 minutes left in the third quarter of Sunday's game, Rams quarterback Jared Goff fired a pass deep down the left sideline for receiver Brandin Cooks. Colbert sprinted to the sideline, where he converged on the ball simultaneously with Niners cornerback Ahkello Witherspoon.

As Colbert attempted to brace for landing, his right leg bent awkwardly underneath him. He was taken to the locker room on a cart but returned to the Niners' sideline soon after. After the game, Colbert indicated he'd be OK but was unsure of the official diagnosis.

Colbert's is the latest and longest-term ailment for the Niners defensive backs and comes on the heels of what Shanahan believed was one of Colbert's better performances this season.

"We had a challenge for him the last few weeks and I thought in this game he had covered sideline to sideline very well, just running and hitting," Shanahan said. "And [he] made a real good play on the play he got hurt on also. They tried to challenge us, go over the top, which you want the corner there on, but usually the middle-third player will show up with the speed Colbert has, and he did and he made a good play and unfortunately he got hurt."

In parts of seven games this season, Colbert posted 20 tackles and a pass defended. Now that he's out, Shanahan said the Niners will look at all options, including the potential return to free safety of cornerback Jimmie Ward once he recovers from a hamstring injury.

For now, rookie D.J. Reed will get the first opportunity to replace Colbert. A fifth-round pick out of Kansas State, Reed has appeared in all seven games with one start and has 13 tackles on the season.

"Colbert is one of those guys last year who got his opportunity because a lot of guys went down," Shanahan said. "And he was one of the guys that the second half of the year we got to watch grow and go through some trial and error but ended up playing at a very high level last year and made us very excited about going into this year with him.