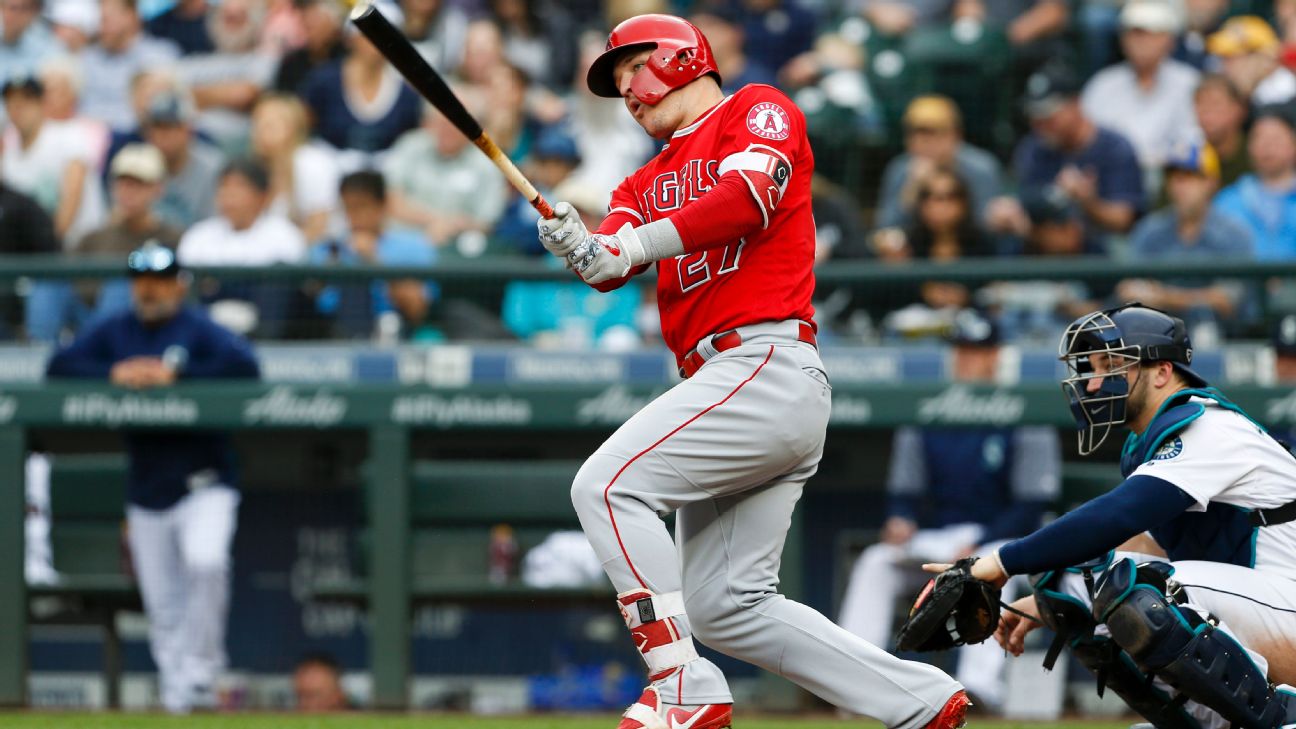 "Obviously I want to be out in center," Trout said, "but it is what it is."

Trout has a sprained right index finger that is affecting his ability to throw, the Angels announced, adding that he will be re-evaluated "in a few days" to assess when he can return to center field, where he is playing Gold Glove-caliber defense.

Trout, a six-time All-Star, said he thinks he injured his finger while playing in Oakland last weekend but that he can't pinpoint when or how the injury occurred.

"I think it was just over time," Trout said. "I don't know one spot when it happened, but it's pretty painful."

Trout tried to play catch when the Angels returned home Monday and said he "felt really sore." He then played center field against the Arizona Diamondbacks later that night and didn't feel any better, prompting him to start the next two games at DH.

"They just said not to throw for a couple days and see how it goes," Trout said. "I'm just trying to ice it and make sure it gets better."

The Angels also scratched scheduled starter Tyler Skaggs for the opener of a four-game home series against the Toronto Blue Jays, replacing him with minor league journeyman John Lamb. Skaggs, who has allowed only one earned run in 20 innings this month, is dealing with tightness in his right hamstring; he is the sixth injured Angels starting pitcher.

The Angels have been decimated by injuries, with as many as 15 players on the disabled list at one point, but Trout has almost single-handedly kept them afloat with what might be his best season yet.

"This is not an easy game, and this guy makes it look easier and easier every year," Angels right fielder Kole Calhoun said earlier this week. "It's a special talent that we're not going to see too many times, so enjoy it now."

Trout's greatness can best be appreciated under the prism of a 1,000-game sample size, which is now in play.

Trout already has more home runs, walks and WAR than the all-time leader in those categories, Barry Bonds, had by the time he reached 1,000 games, according to ESPN Stats & Information. He is one of five players with at least 200 homers and 150 stolen bases through his first 1,000 games, along with Willie Mays, Alex Rodriguez, Alfonso Soriano and Darryl Strawberry. And he has already compiled a higher career WAR than 74 position-player Hall of Famers, including Vladimir Guerrero, Hank Greenberg, Harmon Killebrew, Willie Stargell and Kirby Puckett.

"This guy's just getting started with his career," Angels manager Mike Scioscia said of Trout. "As exceptional of a ballplayer as he is, he's equal that as a person. He's a tremendous person; just really has a sense of duty, comes out here every day wanting to play the best he can, great with his teammates and has great perspective on what his talent is and what gifts he has."

Trout's best asset might be his ability to continually improve.

Early in his career, there were thoughts that he would no longer be a threat stealing bases because his power was becoming more pronounced, but Trout totaled 52 stolen bases the past two years, and he already has 13 -- with only one caught stealing -- this season. He has also made major strides with his defense while in search of his first Gold Glove. Trout has six defensive runs saved this season, tied for fifth-most at his position. His DRS was minus-6 last season.

"I feel blessed to be up here," he said. "I take pride in coming to the ballpark. I don't take it for granted, because you never know."