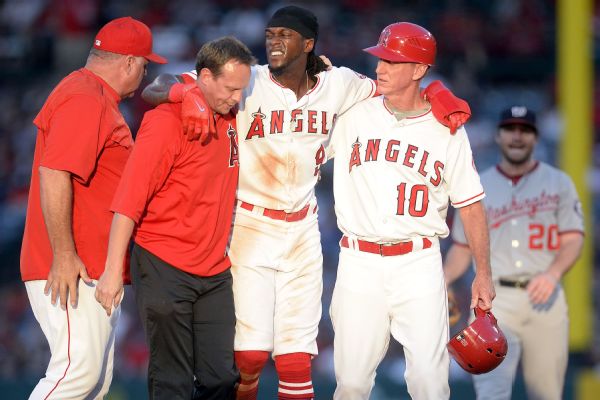 The Los Angeles Angels have officially placed AL stolen base leader Cameron Maybin on the 10-day disabled list with an MCL sprain in his right knee and recalled right-hander Alex Meyer from Triple-A Salt Lake.

Meyer is slated to make the start Wednesday night against the Washington Nationals.

In other moves, the Angels called up outfielder Shane Robinson from Salt Lake and optioned right-hander Eduardo Paredes to clear a spot on the 25-man roster.

Maybin, who has 25 stolen bases on the season, sprained his right knee while sliding awkwardly into second base Tuesday night during the Angels' 4-3 loss to the Nationals. Maybin opened the first inning with a single, but Nationals starter Edwin Jackson pitched out when Maybin took off to steal second. Maybin adjusted his slide into second too late and dragged his right leg awkwardly behind him.