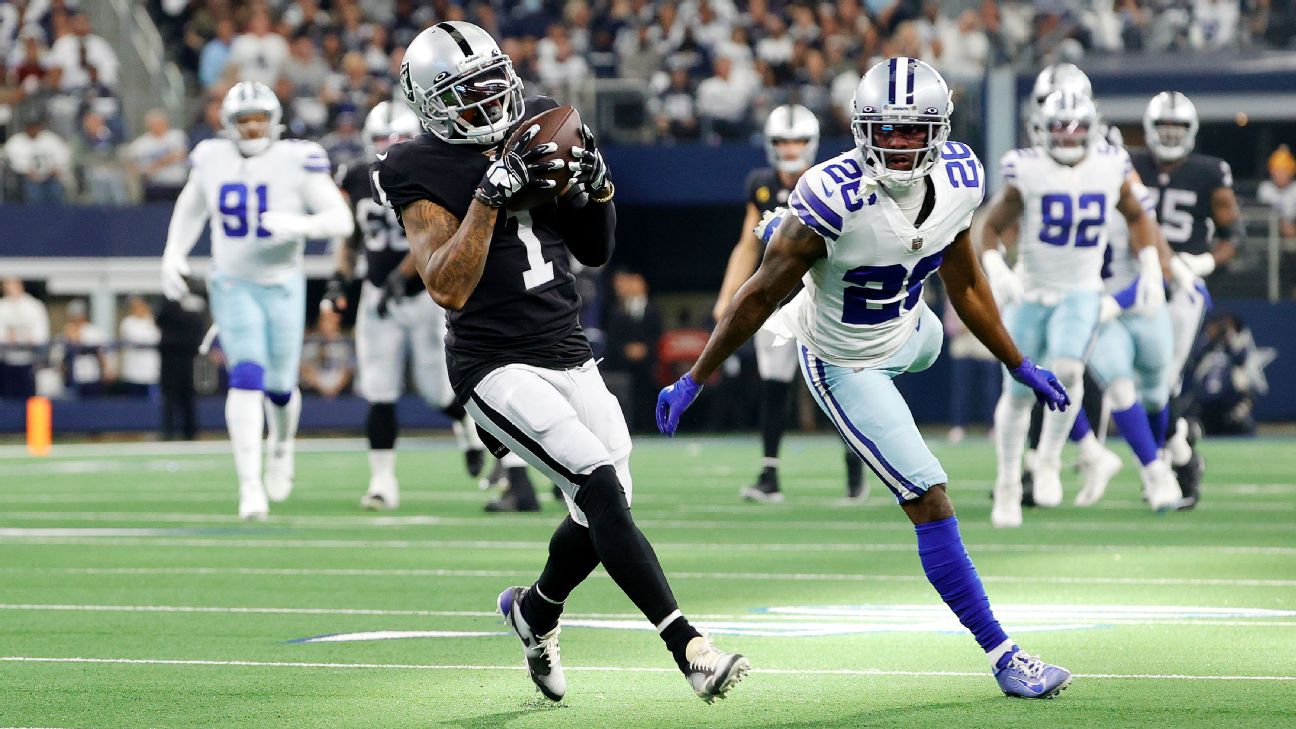 ARLINGTON, Texas -- After so many slow starts in their post-bye three-game losing streak, the Las Vegas Raiders were much faster to get things going against the Dallas Cowboys.

Raiders quarterback Derek Carr had time to step up in the pocket on a first-and-10 at the Las Vegas 44-yard line and found a streaking DeSean Jackson going right to left across the middle of the field. Jackson beat cornerback Jourdan Lewis and safety Damontae Kazee as he tip-toed and then raced up the left sideline for a 56-yard touchdown on the Raiders' third play from scrimmage to give them an early 7-0 lead. It was Jackson's 34th career TD of 50-plus yards (including returns), per ESPN Stats & Information. Only Jerry Rice (36) has more all time.


It was just the second catch Jackson, who turns 35 on Wednesday, has had with the Raiders after signing with Las Vegas on Nov. 8. He had a 38-yard catch against the Kansas City Chiefs in his Raiders debut but lost a fumble on the play. The score was his sixth career touchdown against the Cowboys and fourth at AT&T Stadium.
Report a correction or typo
Related topics:
sportsespnnfldesean jacksonlas vegas raidersderek carr
Copyright © 2022 ESPN Internet Ventures. All rights reserved.
TOP STORIES
Valley firefighters sent to help battle fire in Big Sur
Loved ones grieve for Missy Hernandez at Fresno vigil
Tax filing season starts Monday. What to expect for 2022
Fresno's famous 'dancing teacher' appears on Ellen Show
5 tax changes that can boost your refund this year
Fresno Mathnasium sees demand for math tutoring amid pandemic
Man hospitalized after shooting in northwest Fresno
Show More
Suspect opens fire at birthday party full of teenagers in Clovis
Fauci optimistic omicron will peak in February
Rescuers use sausage dangling from drone to lure runaway dog to safety
Arnold Schwarzenegger involved in multi-vehicle crash
Deputies investigating armed robbery at Tulare Co. convenience store
More TOP STORIES News