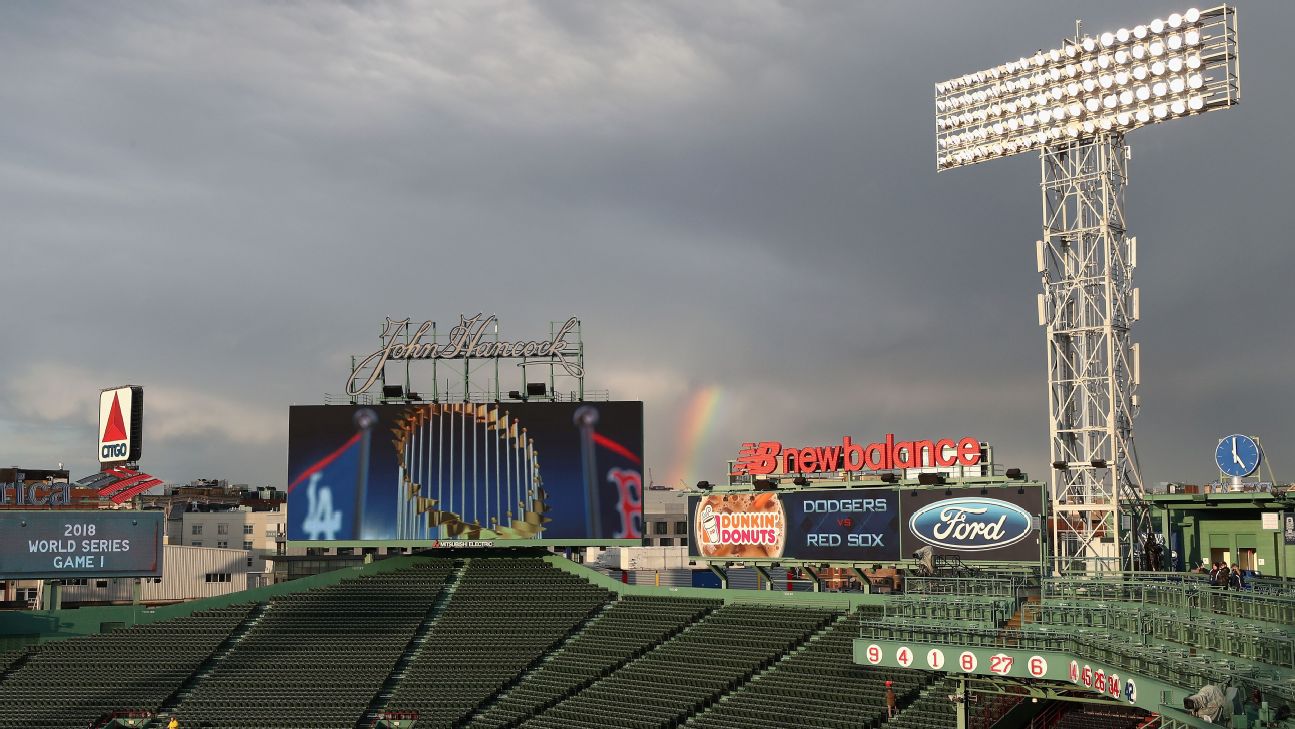 ESPN
By David Schoenfield
BOSTON -- Batting practice was cancelled before Game 1 of the World Series at Fenway Park, but the game still started on time, featuring the marquee pitching matchup between Clayton Kershaw of the Los Angeles Dodgers and Chris Sale of the Boston Red Sox, two of the best left-handers of this -- or any -- generation.

After some late afternoon showers in Boston, the sun partially came out around 5 p.m. ET, a rainbow appeared from above the Green Monster all the way to over the right-field grandstand, and the grounds crew temporarily removed the tarp from the infield (it was later put back on, even as the skies cleared). Rain returned to Fenway after 6:30 p.m., with lightning in the area forcing fans already in the stadium to seek shelter on the concourse. Despite the late round of storms, Game 1 got underway on time.

Dodgers manager Dave Roberts rolled out an unusual lineup, stacking his lineup with nine right-handed batters against Sale, the first time that has happened in a World Series game since 2005, when the Houston Astros did it in a game started by the Chicago White Sox's Mark Buehrle.

The curious choice is the decision to bat Brian Dozier in the leadoff spot. Dozier has an extensive history against Sale from their days together in the AL Central and has hit .255 (12-for-47) with three home runs off him, but he has struggled since joining the Dodgers at the July 31 trade deadline. He didn't play much in the first two rounds, going 2-for-11 with two walks, and hit .182/.300/.350 in 170 regular-season plate appearances with the Dodgers.

It's understandable that Roberts would want to stack his lineup against Sale, however, as lefties have hit just .175 against him in 2018 with no home runs (including the postseason). Of course, righties don't exactly light him up either, as they hit .181 -- albeit with a slugging percentage nearly 100 points higher.

The Dodgers startedAustin Barnes at catcher over Yasmani Grandal, who has struggled with passed balls and wild pitches so far in the postseason. Matt Kemp earns the DH spot after hitting .273 and slugging .508 against lefties. Once Sale is pulled and Red Sox manager Alex Cora goes to his stable of right-handed relievers, Roberts can counter with his powerful left-handed bats off the bench: Max Muncy, Cody Bellinger, Joc Pederson and the switch-hitting Grandal.

The Red Sox's lineup does not feature any major surprises. As he did in a couple of games against the Yankees in the division series when a lefty started, Cora has moved Steve Pearce up to the third spot, sliding J.D. Martinez and Xander Bogaerts back to fourth and fifth. Pearce hit .304/.400/.559 against lefties in the regular season. Rafael Devers gets the start at third base over Eduardo Nunez, even though that creates a lefty-lefty matchup against Kershaw. Devers had a couple of key hits in the American League Championship Series, including a three-run homer off Houston'sJustin Verlander in Game 5 of the ALCS.

The weather could still play a factor, even if the rain stays away during the game (the Weather Channel calls for a 20 percent chance of rain from 8 p.m. onward). The outfield grass will likely be a little slick and the game-time temperature is expected to be in the upper 40s and fall a bit from there. Since the last World Series game at Fenway in 2013, only one other World Series game has started with a temperature below 50 (Game 2 in Cleveland in 2016).

In pregame ceremony news, James Taylor sang the national anthem and Hall of Famer Carl Yastrzemski threw out the first pitch -- as he has done in Boston's other recent World Series openers. Patriots coach Bill Belichick also did a voiceover for Fox's pregame telecast, with the topic, "How do you make history?"

That's what the Dodgers and Red Sox are trying to do -- the Dodgers trying to capture their first World Series title since 1988 and the Red Sox trying to become the sixth team of the expansion era (since 1961) to win at least 108 games and the World Series.