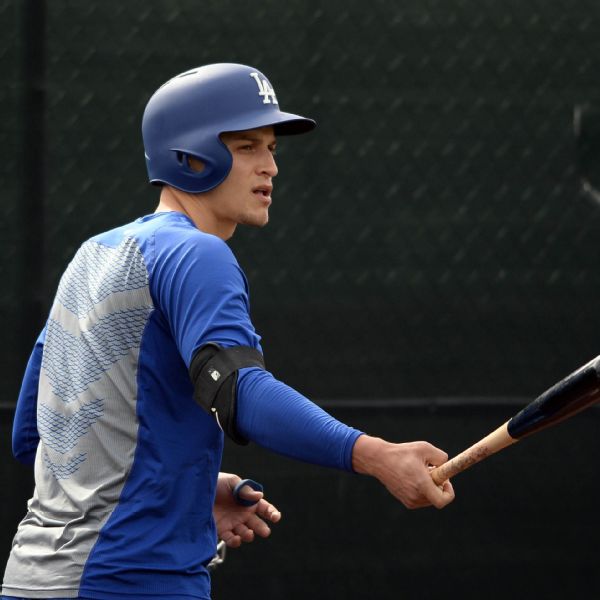 ESPN
By Alden Gonzalez
GLENDALE, Ariz. -- Confined to crutches and unable to contribute, Corey Seager found himself in an awkward middle space while his Los Angeles Dodgers advanced to a second consecutive World Series last fall. He didn't want to be intrusive, but he wanted to feel included. He wanted to offer advice, but he didn't want to overwhelm.

"It was difficult," Seager said. "It's a hard balance."

Seager no longer has to pretend. He's in camp with the Dodgers, legitimately building his way back toward being the everyday shortstop. The 24-year-old cut dairy from his diet, showed up looking slimmer and said he "got my ass kicked" during an entire offseason spent in L.A., the product of an intense strength-and-agility regimen that basically reshaped his body after surgeries to his right elbow and left hip.

Seager, who underwent Tommy John surgery in May and an arthroscopic procedure on his hip in August, took ground balls with other Dodgers infielders Friday morning, but didn't throw across the diamond. It's one of few steps remaining -- along with live batting practice and more intense running -- for Seager to be cleared for game action, at which point he would need somewhere in the neighborhood of 50 at-bats to be considered regular-season ready.

Opening Day is still within range, but it isn't necessarily a goal.

Seager entered the 2018 season fearing that his ulnar collateral ligament might eventually snap, but that didn't temper his frustration.

"You can expect it," Seager said, "you can know that you might have some problems, but when it happens, it still takes its toll."

Seager sought advice from others who had the same elbow surgery, most of them pitchers. He accepted his reality and focused solely on each day, never considering the steps that followed.

Tommy John surgery demoralized Seager, but it was the hip procedure -- a proactive measure to avoid potential setbacks -- that completely immobilized him, forcing him to rely on others for mundane tasks.

Now, though, Seager is starting to feel like himself again.

If he returns to form, he qualifies as the Dodgers' greatest offseason addition. Seager won the National League Rookie of the Year Award in 2016, the first of two consecutive seasons that included an All-Star appearance and ended with a Silver Slugger. During that two-year stretch, Seager batted .302/.370/.497 and compiled 12.9 FanGraphs wins above replacement, fifth-best in the major leagues. Manny Machado, the man who replaced Seager for the final 15 weeks of the 2018 season, contributed 8.9 WAR over that same stretch, placing him 19 spots below Seager.

Seager said he embraced the idea of another star joining the Dodgers, even if he just so happened to play his position.

"You always want elite players on your team," Seager added. "You figure out where you play from there."

Machado remains a free agent, joining Bryce Harper in what is still an astonishingly long unemployment line. The Dodgers never showed interest in bringing him back. And they never felt the need to assure Seager that he remained their long-term shortstop.

"Manny was here to fill a hole," Roberts said. "But Corey was always going to be in our short-term and long-term plan, so I didn't feel like I needed to have that conversation."
Report a correction or typo
Related topics:
sportsespndave robertsmlbtommy john surgerylos angeles dodgerscorey seager
Copyright © 2020 ESPN Internet Ventures. All rights reserved.
More Videos
From CNN Newsource affiliates
TOP STORIES