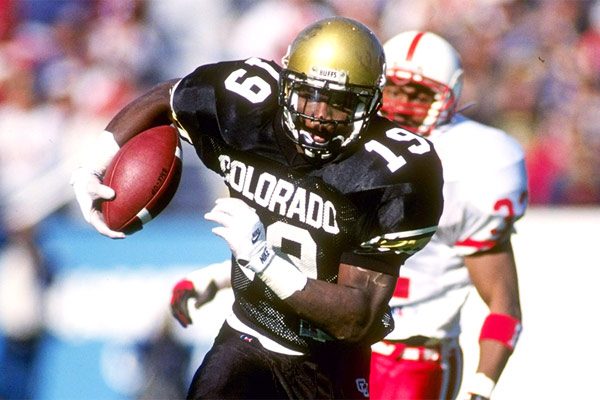 Rashaan Salaam, whose body was found in Boulder, Colorado, on Dec. 5, committed suicide by shooting himself in the head, the coroner's office reported Thursday.

The Boulder County Coroner's Office reported that the autopsy showed the cause of Salaam's death was a gunshot wound to the head.

His body was found in a parking lot at Eben G. Fine Park, which is less than 2 miles from Folsom Field, where Salaam starred as a running back for the University of Colorado Buffaloes.

The Buffaloes honored Salaam on Thursday night at the Alamo Bowl with a decal, displaying his initials above the No. 19 he wore at Colorado. Colorado played Oklahoma State in San Antonio.

"Our guys walk by his trophy every day," Colorado coach Mike MacIntyre said Wednesday during a news conference promoting the bowl game. "There's flowers around it now, and it's something we notice every single day. ... Every time I remember Rashaan, he always had a great smile. He was very, very humble. I really appreciate Rashaan and what he did for the program."

After Salaam's body was found, Boulder Police spokeswoman Shannon Cordingly said there were no signs of foul play. Police told Salaam's mother, Khalada, they suspected suicide after finding a note.

It was also noted in the coroner's report that Salaam's family was offered the chance to test him for chronic traumatic encephalopathy, or CTE, before the autopsy, but the family declined. The presence of CTE has been linked to the suicide deaths of a number of athletes including former NFL players Junior Seau and Dave Duerson.

Salaam's brother, Jabali Alaji, told USA Today in December that Salaam had "all the symptoms" associated with CTE. He also told the newspaper Salaam's brain was not donated for evaluation for CTE because of the family's Muslim faith. Muslim burial rituals call for burial within days of death and forbid desecration of the body.

Salaam won the Heisman Trophy in a season in which the Buffaloes finished No. 3 in the final Associated Press poll. He rushed for 2,055 yards and 24 touchdowns that season and also won the Walter Camp and Doak Walker awards.

Injuries and fumbles (he lost 14 in 31 games for the Bears) plagued Salaam's professional career. He acknowledged in 1999 that marijuana use contributed to his problems in Chicago. "It probably had me out there lackadaisical instead of going out there 100 percent," he told ESPN in an interview then.

"Everybody thinks getting high is cool -- you can let it go when you want to let it go," he said. "But it's just as potent as cocaine."

Salaam broke his leg in the third game of the 1997 season, after committing two costly fumbles, and said that injury increased his addiction.

Salaam told ESPN he had informed the Bears about his problem early in 1998 and entered a rehabilitation program, but the Bears later cut him, and he was out of football for a season.

He signed as a free agent with the Oakland Raiders in 1999, but he was cut. He landed in Cleveland later that year and played two games for the Browns. He also was a member of the Green Bay Packers' practice squad.

Salaam also briefly played for the XFL Memphis Maniax in 2001.