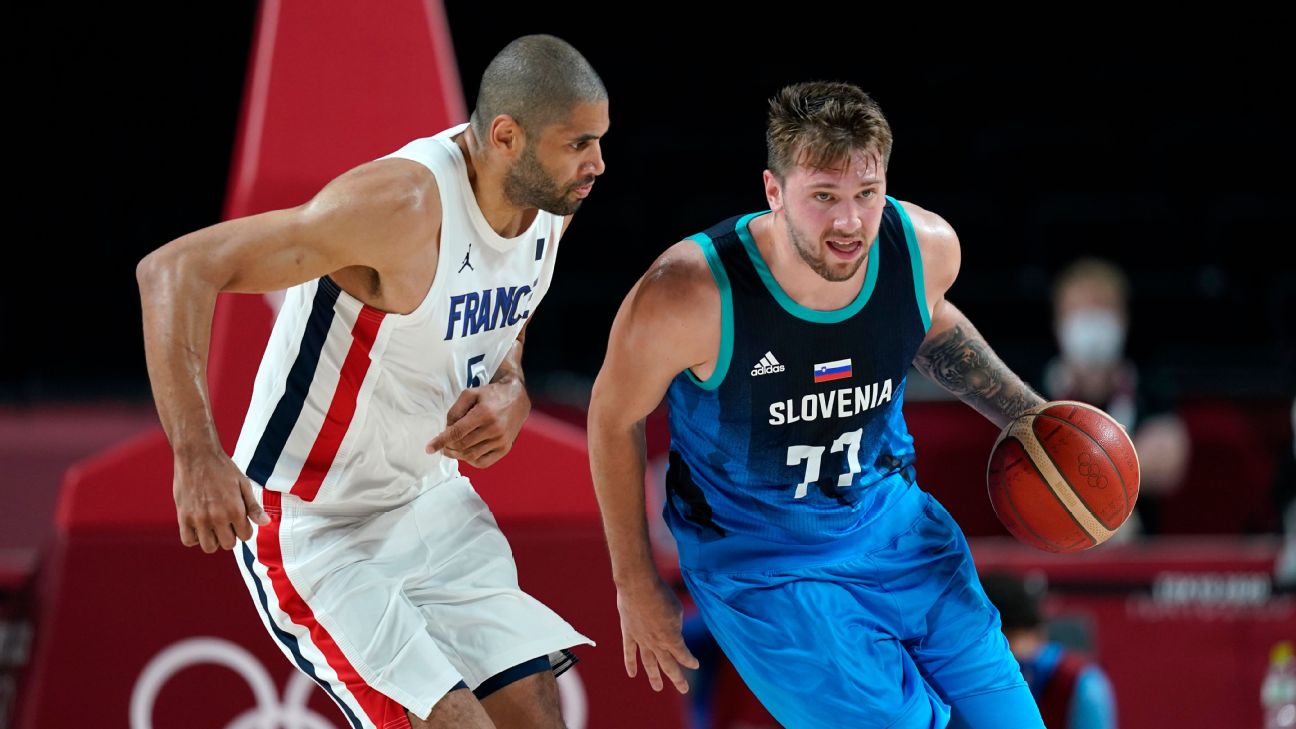 SAITAMA, Japan -- Game on the line, final seconds ticking away, and Slovenia's Klemen Prepelic had nobody between him and a layup that would have sent his country into the gold-medal game at the Tokyo Olympics.

Nicolas Batum had only one thought.

That's exactly what he did, reaching over Prepelic to block the shot with 2.4 seconds left. With that, France survived a historic effort from Luka Doncic to beat Slovenia 90-89 on Thursday night in the Olympic men's basketball semifinals.

The reward: a rematch against the U.S., the three-time defending Olympic champions. France has beaten the Americans in each of their past two meetings, including in their opening game at the Tokyo Olympics. If the French can do it again Saturday, they'll be good as gold.

Doncic had the third triple-double in Olympic men's history -- 16 points, 10 rebounds and 18 assists -- but it wasn't quite enough, and Slovenia fell to 17-1 all time when he is in the national team colors.

"I don't think we played great, but we were there," Doncic said, sporting an ice pack on his wrist postgame. "We had the last chance, and we didn't make it."

He may be an Olympic champion one day, but not yet.


France has been this far at an Olympics only twice before, losing to the Americans in title games at the 1948 London and 2000 Sydney Games. Slovenia will play Australia for the bronze on Saturday night, the winner getting what will be a first-ever men's basketball medal.

"Probably one of the best blocks I've seen," said France center Rudy Gobert,perhaps the best shot-blocker in the world these days. "Being able to grind for 40 minutes and win an Olympic game on that block, it's just amazing. This is why you play the game. This is why you work hard, why you sacrifice time from your families, to come here and try to accomplish something and be part of those moments."

Nando de Colo had 25 points, Evan Fournier scored 23, and Timothe Luwawu-Cabarrot added 15 for France -- now the last unbeaten team left in the men's tournament at 5-0. Gobert had nine points, 16 rebounds and four blocks for France, and Batum blocked four shots, none bigger than the one at the end.

Mike Tobey scored 23 for Slovenia, which got 17 from Prepelic.

France trailed by eight in the first half then went up by 10 late in the third before needing to survive a wild fourth quarter. Slovenia tied the game twice in the final period, both times on baskets inside by Tobey, but never took the lead.

"We fought them like we are the same," Slovenia coach Aleksander Sekulic said.


Luwawu-Cabarrot took a kickout pass from Gobert with 56.1 seconds left and made a wide-open 3-pointer to put France up 90-85. A free throw got Slovenia within four, then Fournier fouled out on an offensive foul while dribbling upcourt on the next France possession.

Prepelic took a pass from Doncic on the ensuing possession and hit a 3-pointer to get Slovenia within one. Then it came down to the last shot, which Batum knocked away as Slovenia argued for a foul to no avail.

Batum went over to Doncic when it was over, giving him a hug and words of encouragement, telling him to use this loss as fuel to keep his stardom growing.

Doncic had flirted with triple-doubles twice already at these Olympics, finally getting this one on a rebound that set up the final Slovenia possession. The other triple-doubles in Olympic men's play: Alexander Belov for the Soviet Union in 1976 and LeBron Jamesfor the U.S. in 2012.