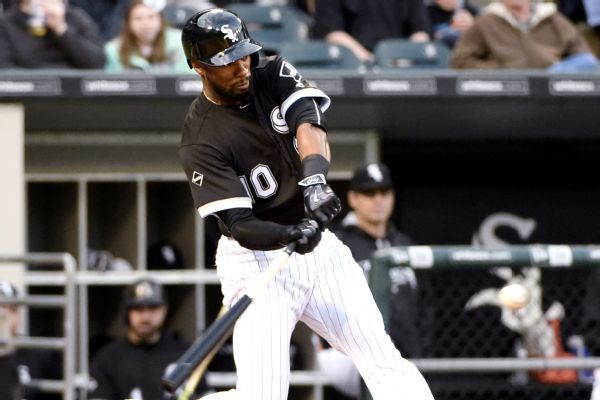 ESPN
Center fielder Austin Jackson has agreed to a deal to join the San Francisco Giants, the team announced Monday.

The two-year, $6 million deal includes bonuses based on playing time, and other escalators could increase the overall value of the deal to $8.5 million, a source told ESPN's Jerry Crasnick.

"We are excited to have Austin join the Giants", said Giants senior vice president and general manager Bobby Evans. "He is a talented and versatile player who will strengthen our roster and provide additional depth at all three outfield positions."

Jackson, who can play all three outfield positions, will earn $3 million per season, and has $1 million in escalators in 2019 plus $1.5 million in performance bonuses for the second year.

Whether Jackson meets those incentives, however, is to be determined as he likely will be slotted as the Giants' utility outfielder.

"Did we get him to be our everyday center fielder? Probably not," said Brian Sabean, Giants' executive vice president of baseball operations.

Jackson, who will turn 31 on Feb. 1, played in 85 games last season for the Cleveland Indians, providing them some outfield depth and insurance for All-Star Michael Brantley, who missed more than seven weeks because of a bothersome ankle injury.

The Jackson deal increased the Giants' projected 2018 luxury tax payroll to about $195 million -- just $2 million below the threshold -- and the bonus structure pushed additional money into the deal's second year.

Evans said the Giants still had some wiggle room "to manage opportunities that come along" such as signing a player to a minor league deal before spring training or pursue an acquisition at the trade deadline come summer, though they could free up some space well before then with a trade.

"We're still targeting to stay under the CBT but, again, it's not a requirement," Evans said. "We are staying active in discussions with options out there. We intend to stay with that target for now, below the threshold. ... The advantages to staying under it now, doesn't mean when it's all said and done that we're under it, but there are advantages to it that if we can stay under it produces benefits into the future years, so we're mindful of that."

Jackson played only 54 games for the Chicago White Sox in 2016. Before that, he played in 2015 for the Seattle Mariners and the Chicago Cubs, batting .267 with nine homers and 48 RBIs in 136 games. He played for theDetroit Tigersfor four-plus seasons, before he was traded to Seattle in a multi-team 2014 deadline deal that moved ace David Price from theTampa Bay Raysto Detroit.

A right-handed batter, Jackson has played mostly center field during his seven seasons in the majors. He is a .275 hitter with 62 homers, 349 RBIs and 111 steals in 999 career games.

Manager Bruce Bochy is eager to see how his outfield takes shape. Hunter Pence will make the move to left field after the Giants acquired Andrew McCutchen from Pittsburgh last week to be the starter in right field.

Steven Duggar also is a candidate to make the club out of spring training. He batted .261 with two home runs and six RBI in 13 games with Triple-A Sacramento last season and played at three levels in the minors, hitting .262 with six homers and 26 RBI in 44 games.

"We still have an outfield spot there that is going to be competitive on who makes this club," Bochy said. "Just to have these kind of options and this kind of defense and production from the outfield is going to be nice to have as we go into spring training."