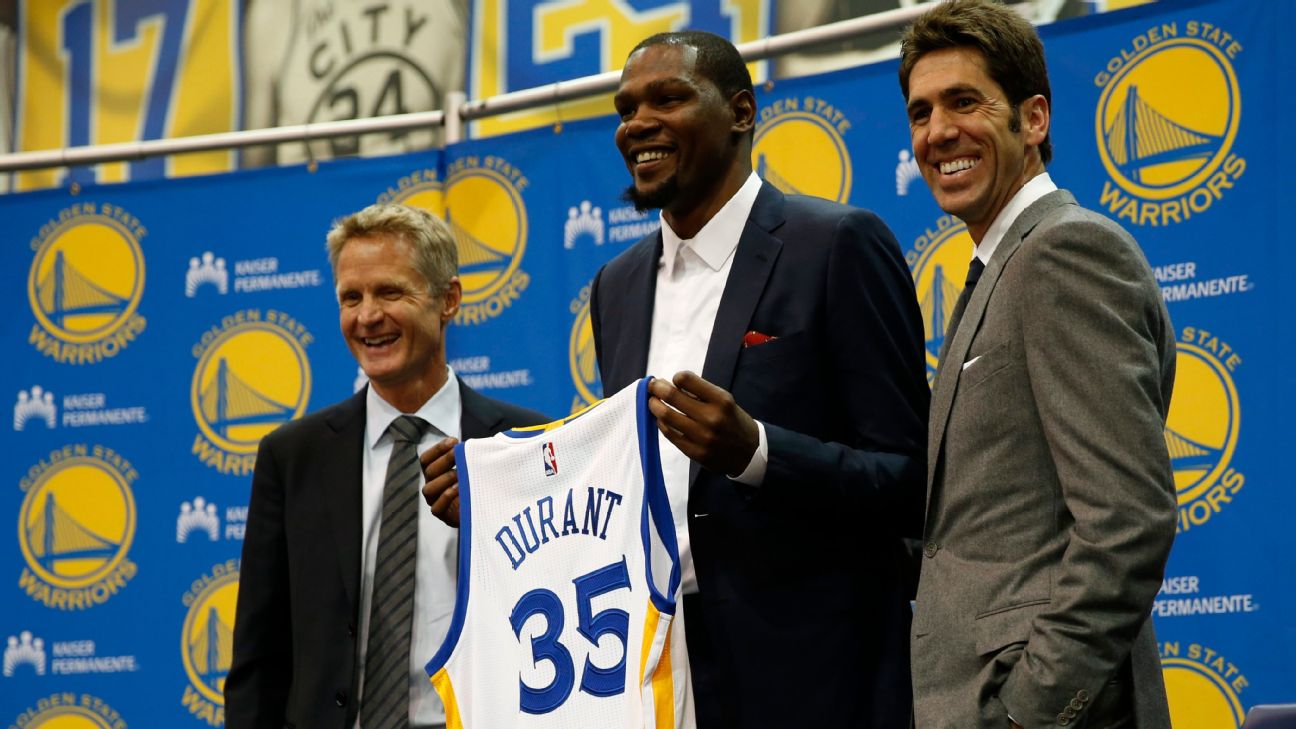 "I feel like all our players are happy and want to stay with us and continue with us," Myers said Monday when asked about Durant's future. "That's how I feel. But again, I've only worked in the NBA as an agent and in this capacity -- I thought Jacob Evans was going to be a rotation guy. I don't know.

Durant, who is expected to become a free agent again at season's end, said before the season began that he wants to be "transparent" about his decision this summer, but in recent months he has tried to steer away from the conversation about his future.

Speculation about where Durant might land this summer has been a topic of conversation since the season began and has only intensified over the past week since the New York Knicks tradedKristaps Porzingis to clear enough space to chase Durant and another All-Star-caliber player.

Despite all the speculation about what might happen, Myers does not believe the chatter has had a negative effect in the Warriors' locker room.

"I don't necessarily feel that in the locker room personally," Myers said. "I don't feel like it's become part of our fabric. I think maybe that comes from being a team that's been scrutinized for the last three or four years, that's used to a lot coverage, which they've earned and deserve. You've got players that have been in a spotlight position and Steve, who's got great experience as a player, playing with some high-level guys, coaching our team. He really is kind of the steward of that ship as far as keeping our locker room intact and in a good place, but it's not easy. It's a hard thing to do. But I don't sense any of that creeping in from my perspective."

Myers said that while he understands the interest in potential free-agency movement, he isn't getting caught up in day-to-day questions about where star players such as Durant might go in a few months.

"I don't get upset," Myers said of opposing teams being linked to players. "It's a competitive league. I've got great respect for all the other teams. That's what they're supposed to do, right? I think that's what makes the NBA what it is. Star players can change narratives with different teams, can change a direction good and bad."

Durant, who is usually accommodating to the media, has not spoken publicly since the Porzingis deal went down. Warriors All-Star Klay Thompson, who will be an unrestricted free agent at season's end, brushed off the chatter about the Warriors' futures. In the wake of Saturday's win over the Los Angeles Lakers, one in which a group of Lakers fans chanted, "We want Thompson!" throughout the game, the Warriors seem to be taking it all in stride.

"I grew up where we would be chanting wanting Lakers players," Myers said. "So I guess that's a good place to be in."

As for the perception that the Warriors have to re-recruit both Durant and Thompson, Myers acknowledged that process has been ongoing for a long time.

"We recruit every day," Myers said. "If you want to maintain a good working culture, you don't just ignore people until their contract's up or say, 'Hey, you can't leave now anyway.' ... My opinion is if you're waiting until somebody has an opportunity [to leave], you haven't really done your job while they were employed with you, so I think that's our approach."

For his part, Myers seems proud of the way his group has come together since a November dustup between Durant and Draymond Green that left many in the NBA community questioning whether the Warriors dynasty was starting to crack. That composure is a major reason Myers doesn't think the questions surrounding Durant's future have broken this team apart.

"Just decent people going through issues in life," Myers said. "They're really good, high-character people. And that allows you to persevere in situations like we all face in any work environment or life when things get difficult. And who rises above it and how you navigate those things. I attribute it to Steve and his leadership and our players. They've been through a lot together, a lot of these guys."

As far as potential additions to the roster, Myers left open the possibility that the back-to-back NBA champions would add somebody once players are bought out over the next few weeks.

"We'll see who's bought out, first of all," Myers said. "And then if it's a player we think makes sense that can help us win a championship, then we'll look at it. ... We're still probably a week or so away from those things happening. But I do like the fact that we're pretty healthy, so there's no dire need for anything. But if we see a player that makes sense and can help us, we'll pursue it."

Myers knows that the questions about the future of his team will continue, but he has been through enough championship seasons to know that things can change in the blink of an eye regarding both a player's future and a team's future, depending on how the rest of the season unfolds.