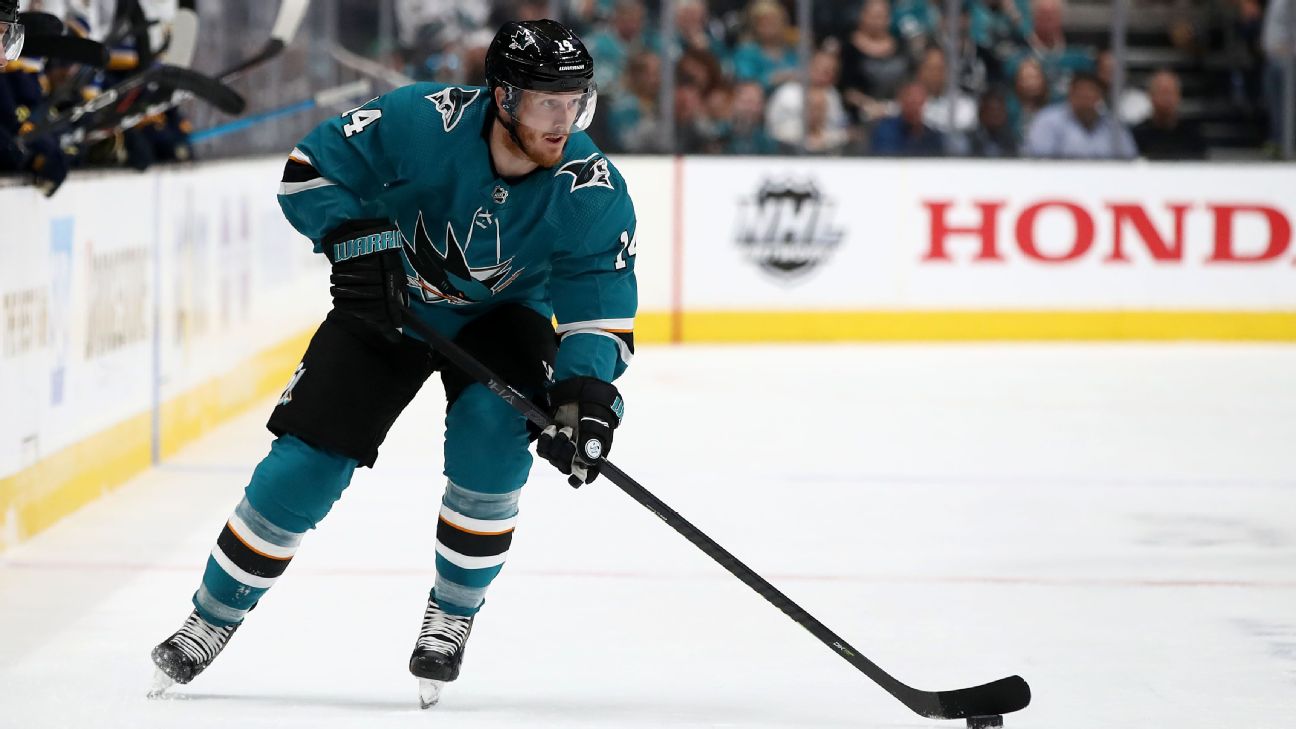 Every year at the NHL trade deadline, teams are forced to make decisions based on whether they believe a deep postseason run is possible.

The Columbus Blue Jackets, for example, went all-in by trading for scorers Matt Duchene and Ryan Dzingel despite being on the bubble when the Feb. 25 deadline rolled around. They were rewarded with a strong performance from Duchene and a series win in the 2019 Stanley Cup playoffs. On the other side of the spectrum, the Montreal Canadiens elected to stand pat at the deadline and came up two points short of a playoff spot.

Of course, things didn't go swimmingly for every team that took big swings. The Nashville Predators traded for top-six forwards Wayne Simmonds and Mikael Granlund and failed to reach the second round.

Our four finalists each took different approaches to the deadline, but they all made at least one move to address a weakness. Let's have a look at how the deadline deals (and the ones they didn't make) impacted their successful postseasons and odds for a Stanley Cup Final berth.

The deal they didn't make: Add depth on defense

Postseason impact: With a shortage of top-six forwards, the Bruins were in the mix for the biggest names available. Instead of spending a bevy of prospects and/or picks to grab the likes of Mark Stone, Wayne Simmonds or Kevin Hayes, they went the under-the-radar route, bringing Coyle back to his hometown and adding a veteran third-liner with plenty of playoff experience.

Neither Coyle nor Johansson were having stellar seasons. With the Wild, former Boston University standout Coyle had only registered 28 points in 60 games. He had also struggled in prior postseasons in Minnesota, scoring seven goals in 44 career playoff games. Johansson hadn't done much to elevate the sputtering Devils this season, with 27 points in 44 games.

During their brief regular-season stretches in Boston, the pair of newly acquired Bruins only combined for three goals, but deadline deals are won and lost in the playoffs and both moves have been victories for the B's.

Coyle is Boston's second-leading scorer, with six goals and six assists. He presently holds the second best even-strength goals for percentage for the Bruins, who have scored 12 goals with Coyle on the ice to just five against in 16 postseason games. He also has the third highest playoff Corsi for percentage on the roster.

Johansson, who has played on Coyle's wing, has tacked on nine points in 14 games and has a solid 52.8 Corsi for percentage.

Turns out dealing for two solid players who can contribute on the third line was a better approach than trying to force a star scorer into the mix as Boston did with Rick Nash the previous season.

Considering the Bruins are up 3-0 on the Hurricanes, it's picky to look at the third defense pairing and wonder if they should have picked up a veteran. Connor Clifton scored a goal in this series, but he played only 12:01 in Tuesday night's win.

The deal they didn't make: Trade a defenseman for top-six winger

Postseason impact:Niederreiter has been the exact opposite of Charlie Coyle. In the regular season, the veteran winger played a huge role in getting the Hurricanes into the postseason, by scoring 14 goals and adding 16 assists in just 36 games after being acquired in late January from Minnesota. In the playoffs, however, he has not been as productive, with just one goal and three assists despite playing more than 18 minutes per game.

The underlying numbers suggest Niederreiter has been a positive player in the postseason despite his lack of scoring production. He has managed the second-highest Corsi for percentage on the team, at a remarkable 61.4 percent, and been on the ice for 52 high-danger chances for the Canes and only 39 against, according to Natural Stat Trick.

Even if Carolina fails to pull off an historic comeback, reaching the Eastern Conference finals in part because of Niederreiter makes the trade completely worth giving away struggling center Victor Rask. Plus, the fact that Niederreiter is under contract through 2022 at a reasonable rate ($5.25 million per season) is a bonus for what has largely been a steal of a deal for the Canes.

Where Carolina might be kicking itself is with the decision to keep their deep pen of defensemen rather than moving one for another scorer. It's possible no amount of firepower would have helped them against Boston, but they have produced just five goals in three games against the outstanding Bruin defense and red-hot Tuukka Rask. With an excess of talent on the blue line after adding Dougie Hamilton last offseason, they might have been able to trade for another scorer.

The deal they didn't make: Acquire a backup option in goal

Postseason impact: There wasn't much more to do for the Sharks at the deadline, considering they had gone all-in during the previous offseason by acquiring Erik Karlsson and signing Evander Kane to a contract extension. But the price for Nyquist, who had 49 points in 62 games this season for Detroit, was merely a second-round pick, so the Sharks were able to improve their impressive group of forwards.

Nyquist has found a home as a playmaker with nine assists this postseason, and he has spent time on the top line alongside the playoffs' leading scorer,Logan Couture. When on the ice together during the postseason, Nyquist and Couture have outscored opponents 8-3, and posted an impressive 58.8 Corsi for percentage.

Nyquist's presence helped soften the blow when the Sharks missed Joe Pavelski for the majority of the second round because of an injury. San Jose couldn't have hoped for anything more from Nyquist when they picked him up at the deadline.

Where the Sharks might question themselves if things go sideways during the remainder of the series is in goal. Martin Jones managed a .896 save percentage during the regular season and he hasn't been much better overall in the playoffs, at .905. He's given his club quality starts in eight of 16 starts, which is well below his 62.5 percent career playoff quality start percentage. To be fair, he's had some big moments -- including some critical saves in the team's two Game 7 victories -- but he hasn't found the consistency that some of the other playoff goaltenders have achieved for their teams.

San Jose did not pick up an in-case-of-emergency goalie to use if Jones faltered. Putting all of their playoff eggs in his basket hasn't been costly thus far, but if he struggles going forward, they might look back and wonder if they should have added a proven backup.

The deal they didn't make: Find an impact player on defense

Postseason impact: During this era of competitive Blues teams that have often fallen short of expectations in the postseason, it has been the norm for them to stand pat at the deadline. So St. Louis hockey fans probably weren't shocked to see that their only move was to grab the much-maligned Del Zotto from Anaheim. He hasn't appeared in a playoff game as the Blues have swapped Robert Bortuzzo and Carl Gunnarsson in and out of the lineup.

At the time of the trade deadline, the Blues were one of the hottest teams in the NHL and didn't have a clear need at forward, defense or in goal. The offseason acquisition of center Ryan O'Reilly pushed quality players down into more favorable roles, and created one of the deepest forward groups in the NHL.

In the postseason, St. Louis's depth has been especially helpful. They have received at least five points from eight different forwards, and saw Patrick Maroon score a game-winning goal in Game 7 against the Dallas Stars in Round 2. Even with star scorer Vladimir Tarasenko struggling, Jaden Schwartz has risen to the task, with nine playoff goals.

Overall, the Blues have a 52.1 Corsi for percentage and have outscored opponents 32-25 at even strength. The results make it pretty clear they didn't need to make a big splash at the deadline to compete for the Cup.

However, St. Louis has allowed more high-danger shots at even strength than they have taken during the course of the playoffs, despite having blueliners like Alex Pietrangelo and Jay Bouwmeester who are known for protecting the net. Bouwmeester has been on the ice for 51 high-danger shots against and just 40 for his team.

If there's one criticism to be had of the Blues' decision to sit tight at the deadline, it's failing to get a defenseman who could make a difference if Bouwmeester, 35, started to show his age during the playoffs, or the depth defenders Bortuzzo and Gunnarsson sputtered. The Blues have survived both of those things happening so far. They will have to hope the choice to add only Del Zotto doesn't come back to bite them.
Report a correction or typo
Related topics:
sportsespntrade deadlinest louis bluesnhlboston bruinscarolina hurricanessan jose sharksstanley cupplayoffs
Copyright © 2022 ESPN Internet Ventures. All rights reserved.
TOP STORIES
Teen killed, another injured in shooting in Orange Cove
Man hospitalized after shooting in Madera, police investigating
19-year-old hospitalized after explosion at Table Mountain Casino
Suspected child abuser rearrested after warrant served at church
Foggy Day School Schedules, Fog Tracker from ABC30
Doctors weigh in on what future of living with COVID looks like
Field worker's truck stolen by armed man in Hanford, deputies say
Show More
Omicron variant impacts Valley Children's hospitalizations, staffing
Cold case team shines new light on betrayal of Anne Frank
Farmer uses art to help fund well for fellow 81-year-old Valley farmer
Microsoft buying Activision Blizzard in $68.7 billion deal
Multiple storage units damaged after fire in SE Fresno
More TOP STORIES News