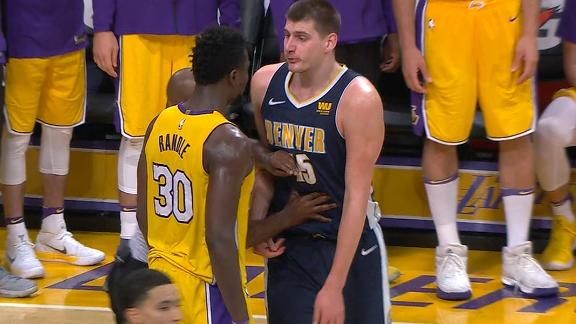 LOS ANGELES -- For the third straight meeting, a Denver Nuggets-Los Angeles Lakers game got heated toward the end. This time, it was Lakers forward Julius Randle and Nuggets center Nikola Jokic who had to be separated from each other.

With 21 seconds remaining, the two big men were locked up together on their way down the court before Randle shoved Jokic to the floor. The two had been going at it for most of the game, and Jokic took exception to the shove.

Randle and Jokic walked toward each other but were quickly separated before anything escalated. Both players were assessed technical fouls. The Lakers beat the Nuggets 112-103.

"I just didn't like [how] he was coming down flailing, flapping his arm and stuff," Randle said. "And that's fine, and that is his game, but when you hook my arm and try to pull my shoulder out of place, I don't like that."

In the Nuggets' two previous wins over the Lakers in Denver this season, it was Jamal Murray who drew the ire of the Lakers because of late-game antics that Lakers coach Luke Walton said were "disrespectful."

At the end of a 115-100 Nuggets win in Denver on Dec. 2, Murray went out of his way to dribble around Lonzo Ball as the final seconds ticked off, upsetting Randle, who fouled Murray.

In their previous meeting, on March 9 at Denver, Walton and Lakers point guard Isaiah Thomas had words with Murray, whom Walton said was "trash-talking" with his players.

On Tuesday night, Randle fouled Murray with 1:03 remaining, not allowing the Nuggets' point guard an easy score inside with the Lakers up 108-99 at the time.

"I don't talk to him much," Randle said when asked about Murray, a fellow Kentucky product. "Honestly, I like the kid, to be honest. I just don't ... we are not for the antics that he has had the past few games.

"I like him, and he is a Kentucky guy, so I am always going to have that relationship. But this is my team, and I'm not going to let the antics fly."

The Staples Center crowd booed Murray when he was introduced in the starting lineup and each time he touched the ball. At the end of the game, Lakers fans repeatedly chanted, "Murray sucks!"

Ball, who had described Murray's dribbling around him earlier in the season as a "punk move," said he heard the chants when the Lakers were at the free throw line.

Ball actually was intentionally fouled late in the game by Denver, but it most likely was a strategic move: Ball entered the game shooting 48.2 percent from the line. He missed both free throws with 1:24 left.

"I am not surprised at all," Ball said of the Hack-a-Lonzo tactic. "When I am on the court, teams are probably going to do that. I just got to knock down free throws. Yeah, [it was the] first time [it's happened ever]. I just got to go to the line and hit my two."

Randle and Kyle Kuzma both had 26 points and 13 rebounds in the win. Kuzma sprained his right ankle and underwent X-rays, which were negative. The forward is listed as questionable to play at Golden State on Wednesday.