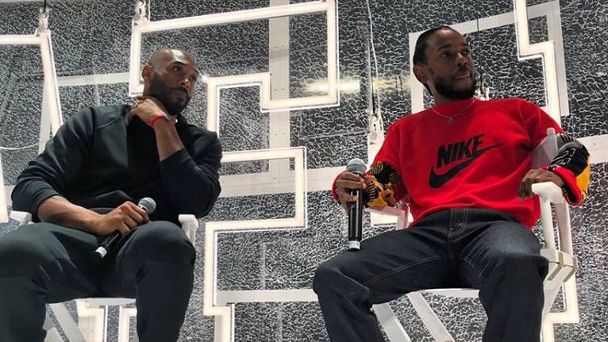 When it comes to the best basketball players in the history of Los Angeles, former Los Angeles Lakers superstar Kobe Bryant is arguably at the top of that list. Rapper and Compton native Kendrick Lamar often shares that same pedestal in discussions surrounding contemporary hip-hop music.

The pair of legends in their respective crafts converged Sunday at the city's annual ComplexCon, where they sat together on a Nike panel to chat about the intersection of music and basketball in their lives.

"I would use [music] to get me into that emotional space," said Bryant, who won five NBA championships during his 20-year career with the Lakers. "So music was there for me from Day 1 to actually help the performance and get me in that zone."

Lamar, who has earned seven Grammy Awards and was named one of the 100 most influential people in the world by Time magazine in 2016, explained how he uses hoops as inspiration.

"Music and basketball go hand-in-hand," said the 30-year-old artist. " ... When I look at Kobe play and I look at some of my favorite players play, it's the hunger, it's the passion, it's the drive that they have on the court. ... The same way he attacks that basket is the same way I want to attack that pen and that pad up there in that studio."

Lamar also narrated an ESPN short film about Bryant titled "Fade To Black" prior to the future Hall of Famer's final game with the Lakers in April 2016.

The rapper then collaborated with the NBA again this pastspring when his hit song "Humble" was used to help anchor ESPN's coverage of the playoffs.