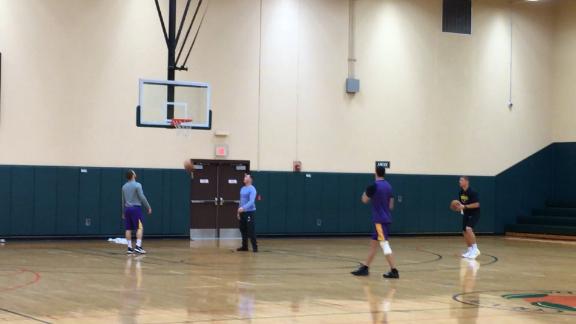 The No. 2 overall draft pick will miss his eighth straight game when the Lakers play the Orlando Magic on Wednesday night.

"When he gets cleared by the training staff he will play," Lakers head coach Luke Walton said as Ball launched 3-pointers at the end of Tuesday's practice. "If that is this trip, it will be this trip. If not, hopefully when we go back home."

"He could play this week," added Walton, who has made it clear the Lakers will play it safe and not rush Ball back. "He could play next week. Or the week after. He could play in one of those weeks."

After the Orlando game, the Lakers play at theBrooklyn Nets on Friday, before completing their five-game road trip at the Oklahoma City Thunderon Sunday. It's possible the rookie could miss the entire trip.

Ball, who was chosen to play for the U.S. team in the Mtn Dew Kickstart Rising Stars game on Feb. 16 during All-Star weekend in Los Angeles, shot after practice on Tuesday.

Ball has begun some limited lateral movement with trainers, but the rookie will have to practice and see how his knee responds the next day before returning to action.

"Still hasn't ramped it up, but he did some work yesterday and felt fine today and didn't get worse from yesterday," Walton said. "[Ball did some lateral movement with trainers but] nothing to the extent of what it would take to be able to play basketball -- move laterally and change direction, full speed, hit somebody, those type of drills. He has not done that. He is slowly doing that in a controlled setting."