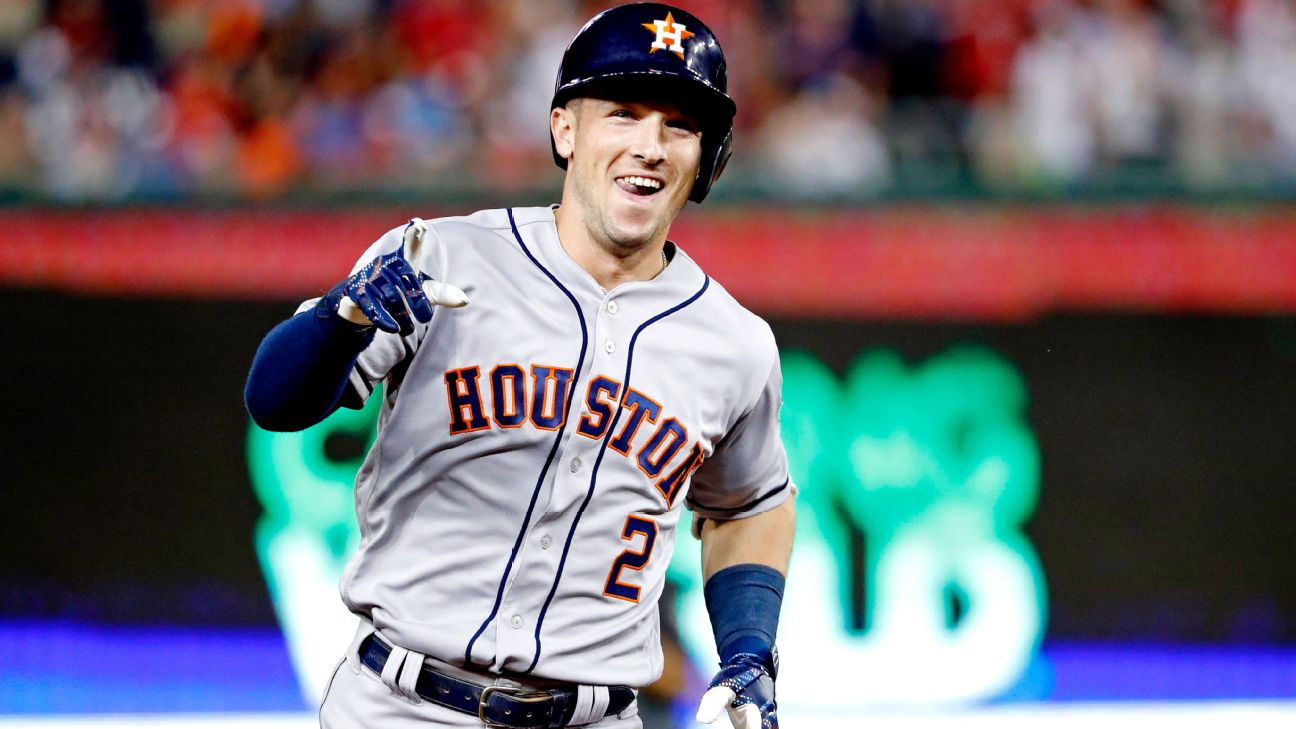 WASHINGTON -- Don't be ashamed. It's OK to admit you like home runs. You can still go on YouTube and watch highlights of your favorite skinny dudes and slap-hitting middle infielders from the 1970s and '80s in their too-tight pullover jerseys and beltless pants swinging at 86 mph fastballs. That brand of baseball was fun. All brands of baseball are fun.

That style of game, however, no longer exists. Not in 2018. It's all about power hitters and power pitching. The big guys hit home runs, the little guys, the in-between guys, the middle infielders and at the 89th All-Star Game, it seemed as if everyone hit home runs, as the AL pulled out a wild 8-6 victory in 10 innings Tuesday night at Nationals Park.

There were a record 10 home runs hit, four more than the previous mark from 1971, and as many as the previous six All-Star Games combined. Jean Segura looked like the hero and then Scooter Gennett was the hero and then a pair of Astros --Alex Bregman and George Springer -- homered off a Dodgers pitcher and suddenly we flashed back to last October. All six home runs in 1971 came from future Hall of Famers; I'm guessing some of the 10 players who connected in this game will end up in Cooperstown as well, and even if you don't like home runs, we can at least appreciate the talent we saw on display.

Here's how crazy this game turned out: There were tying or go-ahead home runs hit in the seventh, eighth, ninth and 10th innings. The last time that happened in any regular season, postseason or All-Star Game was Aug. 7, 2002, between the Mariners and Blue Jays.

So, on this night of home runs, let's review all 10, ranked in order of drama.

This quote from Astros manager A.J. Hinch after the game says a lot about Bregman's rise to All-Star status: "I'm not sure if anyone I've come across in the big leagues loves baseball more than Alex Bregman. It starts with that and he continues to get better."

The 24-year-old third baseman has 20 home runs, already topping the 19 he hit last season. Before the game, Bregman had a simple explanation for his increased power output: "Pull the ball hard in the air." Against Stripling, he took a cutter down the middle on his first pitch and then "went into battle mode and just was trying to put a line drive in play and it left the yard. It was crazy." Yep. He hit the ball hard and hit it in the air.

There's also a neat tie-in between Bregman and Washington, D.C. His grandfather was general counsel for the Senators. "My dad grew up on Ted Williams' lap," Bregman said, referring to Williams' stint as Senators manager. The trophy Bregman won as the game's MVP? The Ted Williams MVP Trophy. His dad had a photo of him and Williams that Williams had signed. "I looked at that picture for 10 years growing up and our only thing, growing up, my dad always told me, 'You've got to be the next guy to hit .400 in the big leagues.'"

This was pretty awesome -- except for all the writers who had their noses in their laptops writing their Segura MVP stories. Sorry, writers!

Segura plays maybe the most loaded position in the majors -- American League shortstop. Even though he hit .323 in the first half and is on pace for more than 100 runs scored, he was stuck in the selection process behind Manny Machado and Francisco Lindor and the made his second All-Star team as the winner of the Final Vote.

He stepped in as a pinch hitter with the score tied against Hader, a guy who had never given up three runs in 66 career major league appearances and held hitters to a .122 average in the first half. Against one of the nastiest lefties in the business, Segura fouled off a 3-2 slider and then a 3-2 fastball then belted a three-run homer off a 95 mph four-seamer in an at-bat prolonged by Joey Votto's dropped catch of a popup against the dugout railing. For a few moments, it appeared Segura would follow in the footsteps of teammate Robinson Cano as All-Star Game MVP. As for Hader, he got into even more hot water after the game when racist and anti-gay tweets he had posted as a teenager surfaced.

The last time we saw Springer face the Dodgers was in the World Series and he killed them then as well, hitting five home runs -- including in Games 4, 5, 6 and 7 -- to win MVP honors. None of those came off Stripling, so he added another notch against a Dodgers pitcher to his belt. At least it didn't come off Yu Darvish. (What, too soon, Dodgers fans?)

Springer entered the All-Star break in a deep slump, hitting .143 over his previous 23 games -- without a home run. "Hopefully it will help me out," he said. "It's obviously a good day for myself and a lot of guys in here. ... For anyone who says [the All-Star Game] isn't competitive, it was extremely competitive." Usually, Bregman follows Springer in the Astros' order. This time, Springer ended up following Bregman. "I love hitting in front of him in the season and got a chance to hit behind him for once."

Bregman had a prediction: "I think George Springer is going to be hot for the second half now, the back-to-back push."

Any Trout home run is a thing of perfection. This one gave the AL a 2-0 lead, cemented Trout's growing legend as Mr. All-Star -- he has had a hit in all six games in which he has played and has won two MVP awards -- and made him the early MVP front-runner as the game settled into a pitcher's duel for several innings.

This is how good Trout is: In the first inning, he drew an eight-pitch walk off Max Scherzer. Mind you, Scherzer hadn't thrown a 98 mph pitch all season and three of his 19 pitches in the first inning hit that mark. (There were 74 pitches all game thrown at 98 mph or faster. And you wonder why there were 25 strikeouts in the game. The amazing thing is there weren't 35.) Anyway, Trout fouled off a 97 mph fastball and 98.5 mph fastball with two strikes to remain alive. Facing deGrom, the Mets right-hander threw him fastballs of 98.8, 97.9 and 98 mph (Trout fouled two off) and then tried to slip a 91.8 mph sinker past him and Trout hits it out. Amazing.

Fun fact: Story has 68 RBIs, the most ever for a National League shortstop at the All-Star break. This tied the score and came right around the time dark clouds and a brisk wind arrived at the ballpark, with the weather report indicating rain was hovering in the near vicinity. Luckily, the only thing raining ended up being home runs.

None of the home runs were monumental in distance, but this one felt like a rocket of a blast as a Judge connected on a 94.9 fastball -- granted, pretty down the middle. Better yet, Justin Verlander called it on Instagram before it happened.

"It was kind of funny actually," Judge said. "[I was] kind of getting ready to go hit and Verlander said, 'I got a really good feeling about this man, I think you're going to hit a home run at this at-bat so just get ready.' That first one I fouled off so I was like, all right, there's no chance at the way Scherzer was throwing, but I was able get that second one so that was a pretty cool moment."

Hinch wasn't necessarily as impressed with his star pitcher's psychic abilities. "I think we get away with calling a lot of things. We always call the home run and I would call home runs usually when Judge is up."

After the AL had scored three runs in the top of the inning, Votto led off the bottom of the 10th with the longest home run of the night. For a moment, it seemed the three-run lead wasn't going to be safe, but Happ then retired the final three batters.

Opposite field. Pretty sweet. Yelich actually has some of the best exit velocity totals in the game; he just doesn't hit enough fly balls to be a big home run guy. This one sort of seemed like an afterthought at the time as everyone was digging up information on Segura'scareer and expecting Diazto close it out and the magical Mariners season was going to continue and how even if Seattle isn't going to beat out the Astros they can still make their first postseason since 2001 and you never know, you just have to get in and anything can happen.

I love that Contreras took a nice pause after his swing ... even though the ball ended up clearing the fence by just a few inches. That's the power game in 2018: Every ball in the air seems to have a chance of being a home run. 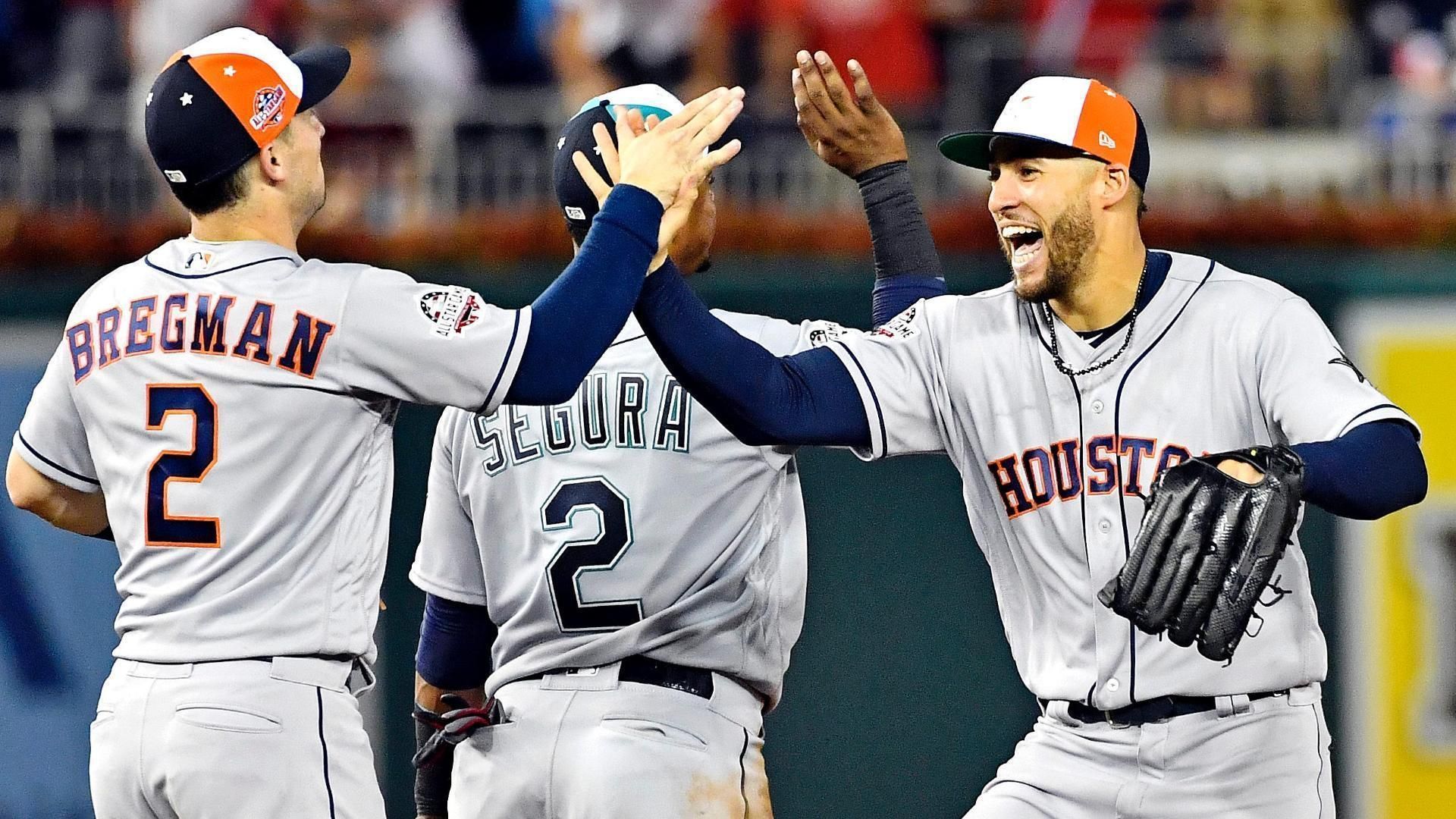