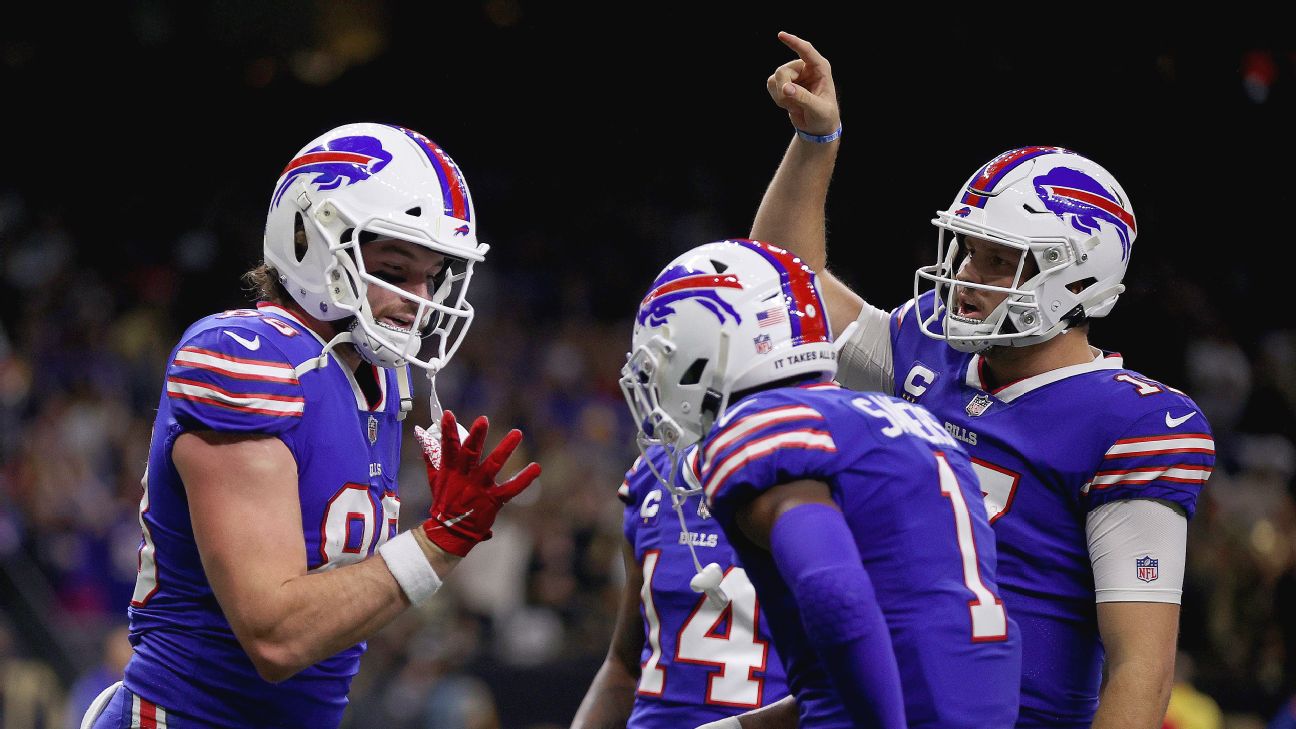 Welcome to a special Thanksgiving Day edition of our NFL playoff picture. If you kept only one eye on the games, or even if you watched them closely, we have a lot to discuss. The outcomes of two matchups shook up the playoff standings in both conferences. Among the takeaways:

We've updated those situations and more below. Look for another update after Sunday's games as Week 12 continues.

No team has exemplified this unpredictable season better than the Titans, who won seven of their first nine games despite facing the NFL's most difficult schedule over that stretch. They then embarked on a much easier schedule, only to suffer a stunning home loss in Week 11 to the Texans. The defeat allowed the Colts to continue closing the gap in the AFC South, shrinking the Titans' lead to two games with six to play. (Tennessee won both head-to-head matchups with Indianapolis.) Regardless of whether the Colts can catch them, it's difficult to view the Titans as the clear-cut AFC favorite when two of their losses have come to the Texans and Jets -- who have a combined record of 4-16. And now the Patriots, arguably the hottest team in the league, await them on Sunday.

Even without quarterback Lamar Jacksonin Week 11, the Ravensmanaged to maintain their hold on first place in the AFC North. They haven't been pretty for a while, having lost to the Bengals and Dolphins and eking out an overtime win over the Vikings over the past month. But maybe that's just how it's going to be for them.

Will a convincing win Thursday in the Superdome be enough to pull the Bills out of a midseason spiral? They entered Week 12 having lost two of their past three games, including an inexplicable defeat to the Jaguars and a 26-point loss to the Colts. The Bills better hope they've figured things out, because they're about to head into a brutal stretch of their schedule. They will play the red-hot Patriots twice in four weeks, with a game at the Buccaneers mixed in there, as well. But for a few days, at least, they've returned to the top of the AFC East.

The Chiefs are rolling off their fourth consecutive victory, a streak that has brought them from below .500 to atop the AFC West. There doesn't seem to be much doubt that the Chiefs will be among the seven teams representing the AFC in the playoffs, and more likely than not, they will be the AFC West champion.

It took the Patriots less than two months to recover from their 1-3 start and even briefly supplant the Bills atop the AFC East. The Bills reclaimed first place with a Thanksgiving win over the Saints, but the Patriots will retake the position if they beat the Titans in Week 12. Five consecutive wins -- and six in their past seven games -- have not only given them a division advantage but also put them within reasonable range of the top seed in the AFC. It's all in front of them now. The Patriots have a fortuitous home game against the AFC-leading Titans this week then play the Bills twice in a three-game stretch next month. If you're judging postseason seedings by how teams are playing at the moment, it's difficult to look past the Patriots as the best-situated team in the AFC (right now, of course).

There was a time when lots of people were worried about Bengals quarterback Joe Burrow's health in returning from last season's knee injury. Through 10 games, we can say that the concern was mostly unfounded. Just making it through 10 games didn't seem a certainty when the season began, but he has the Bengals' offense humming, most recently with a 32-point outburst in Week 11's victory over the Raiders. ESPN's Football Power Index (FPI) is giving the Bengals roughly a 50-50 chance of making the playoffs, but in a wide-open AFC, they have absolutely put themselves in position to be in the December conversation.

The Chargers did everything they could to fall out of the AFC's top seven in Week 11, but in the biggest sign yet that they are turning a corner under coach Brandon Staley and quarterback Justin Herbert, the Chargers stopped doing Chargers things long enough to retake the lead. There is still a lot to question about the Chargers, most notably their special teams, but they showed they are to be taken seriously in the AFC playoff race.

In the AFC hunt

The Steelers are winless in their past two games and are now out of the AFC's top seven. It won't get any easier when they travel to Cincinnati this weekend.

The Colts have won three consecutive games and five of their past six, but prior to Week 11, the quality of the teams they beat wasn't too impressive. That changed with a blowout victory at Buffalo. The Colts are trending in all the right directions, and the Buccaneers are their next test.

We can do nothing but tip our cap to the Raiders, whose post-Jon Gruden slide seemed well underway during a three-game losing streak entering Thursday's game at the Cowboys. They went into AT&T Stadium and won a war of attrition, and now have 10 days to prepare for a winnable home game against Washington in Week 13.

It's incredible that the Browns have won six games given the obvious impact quarterback Baker Mayfield's left shoulder injury is having on his performance. Oh, and don't forget the messy presence and departure of wideout Odell Beckham Jr. If you're picking one team to fall out of the wild-card race due to exhaustion, it's the Browns. They have a road trip to Baltimore on deck.

The Broncos will return from a bye with a .500 record, but consecutive games against the Chargers and Chiefs will likely knock them further from the AFC wild-card race.

Let's tip our cap to the Cardinals, who have traveled quite a journey since their last-minute loss in Week 8 to the Packers. Playing without quarterback Kyler Murray and wide receiver DeAndre Hopkins, they have gone 2-1 with wins at division rivals San Francisco and Seattle. The Cardinals have become the fourth team in NFL history to start a season 6-0 in road games and will get their MVP-caliber quarterback back sooner than later. FPI is calling them a virtual lock to make the playoffs and giving them a better than 90% chance to win the NFC West.

In most scenarios, the Packers with Aaron Rodgers are a legitimate Super Bowl contender. But what should we say about a Packers team that is losing key players to injury on a weekly basis? They are still in really good shape in the NFC North, leading the Vikings by 2 games, with a Week 17 matchup against Minnesota at Lambeau Field looming. But at the very least, the Packers' depth is going to be tested during December football.

The defending Super Bowl champions broke a mildly alarming two-game losing streak on Monday night with a convincing win over the Giants, a team that entered the game ranked No. 23 in the NFL with an average of 18.9 offensive points per game.The lane is there for a high seed in the NFC bracket, as their remaining schedule includes only two teams with winning records (the Colts and Bills).

Uh-oh. The Cowboys were expected to take off once they got quarterbackDak Prescottback from injury. Instead, they have lost three of their past four games. Their lead in the NFC East is not yet threatened; the Eagles would still be two games behind in the loss column even if they beat the Giants on Sunday. But it remains an open question whether the Cowboys will head into the playoffs as a genuine contender or will be in the postseason simply because they're the least-flawed team in a weak division.

It has been a quick tumble for the "all-in" Rams, who have fallen from the top spot in the NFC to the wild-card picture with two consecutive losses. Regardless, the Rams' Week 11 bye came at a good time. They had two weeks to get newcomers Von Miller and Odell Beckham Jr. more acclimated to their program, in addition to figuring out why quarterback Matthew Stafford has thrown four interceptions during the two-game skid. They better hope they get it figured out, because their upcoming schedule includes not only the Packers but the Cardinals, Vikings, Ravens and 49ers. That will be a tough run.

When you seem to play close games every week, the math says you should at least win some of them. The Vikings' Week 11 victory over the Packers boosted their division and conference records. Both are key categories for tiebreakers, and their 4-2 NFC record is the reason they are ahead of the Saints and 49ers (whom they play next week) in the NFC playoff standings. Overall, the Vikings have played in seven consecutive games that have been decided by seven or fewer points, a stretch that either has hardened them for a playoff run or will ultimately cost them entrance into the postseason altogether.

The 49ers have won three of their past four, and they were able to leapfrog the Saints in the wild-card race following Thursday's action. No one can say with certainty whether the 49ers are truly a playoff team, but sometimes these matters get decided in the postseason. Their remaining strength of schedule ranks No. 25 in the league. One caveat to keep in mind is that the Eagles, another NFC wild-card competitor, have the NFL's easiest remaining schedule.

In the NFC hunt

The Eagles also have won three of their past four, each by more than 10 points. And when you see two games apiece against Washington and the Giants remaining, as well as a matchup against the Jets, you see a pretty favorable schedule for staying in the wild-card race. Philly has a road game against the Giants this week.

Can the Panthers really be a playoff contender with a quarterback they signed out of free agency and inserted into the starting lineup within two weeks? Cam Newton might be Superman, but he isn't a magician. Carolina will travel to play the Dolphins on Sunday.

New Orleans Saints (5-6)
That's now four consecutive losses for the Saints since starting quarterbackJameis Winstonsuffered a season-ending knee injury. Their offense had zero punch Thursday night against the Bills, and they're now looking up at the NFC playoff field. They'll play the Cowboys in Week 13, but the one bright spot is that four of their final six opponents have losing records. 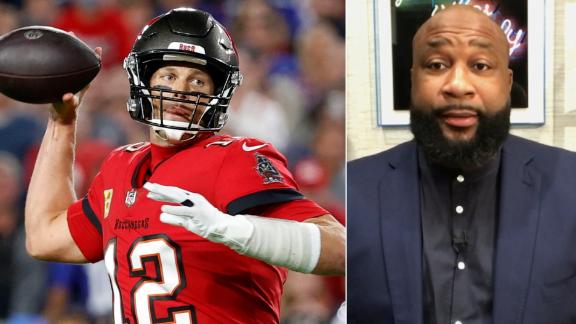 Spears: Everybody in the NFC should be worried about the Buccaneers
Marcus Spears breaks down Tampa Bay's play and why it is a force to be reckoned with. 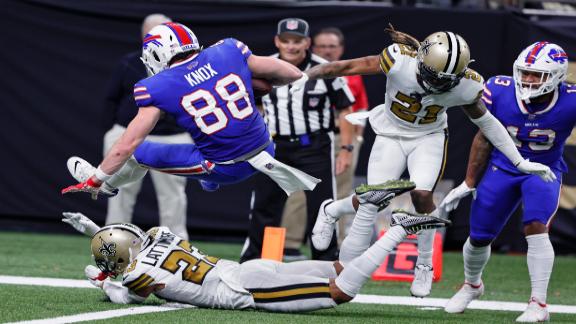 Allen and Knox connect for a second time against the Saints
Josh Allen finds Dawson Knox for his second touchdown of the game versus New Orleans. 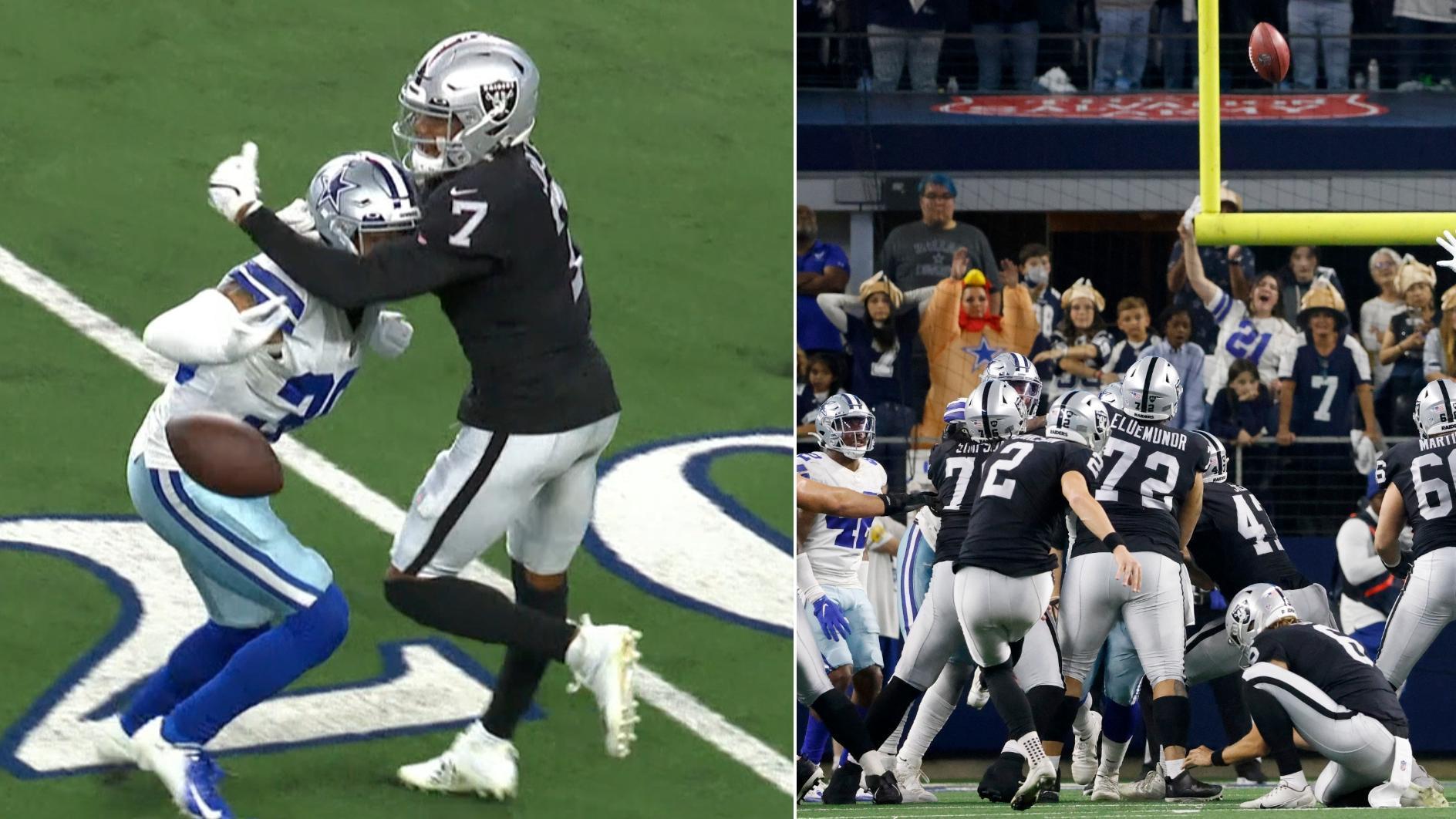 Cowboys CB's 4th PI penalty of game sets up Raiders' winning FG in OT
Anthony Brown is whistled for a pass interference penalty, which sets the Raiders up for Daniel Carlson's winning field goal in overtime. 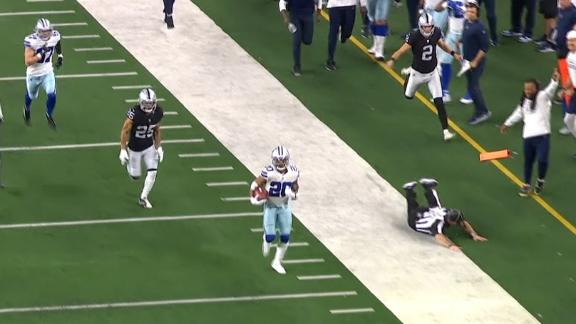