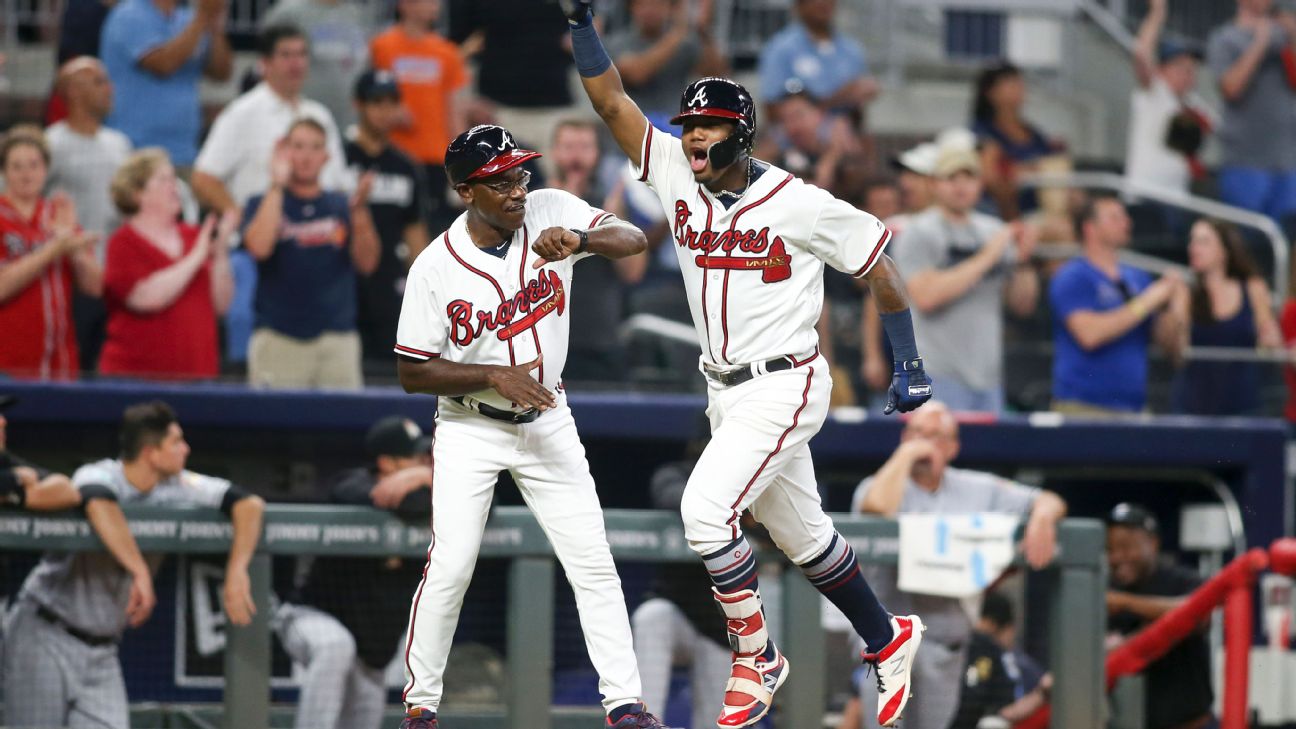 Shohei Ohtani and Ronald Acuña Jr. are the rookies of the year and while you can argue the merits of the other candidates, I think the voters made the right selections. In the end, the votes weren't close, with Ohtani getting 25 of the 30 first-place votes to win the American League award and Acuña receiving 27 first-place votes for the National League award.

Even though Ohtani pitched just 51⅔ innings, he became the first player since Babe Ruth in 1919 to pitch at least 50 innings and hit at least 15 home runs. Unless you're 100-something years old, Ohtani did something none of us have ever seen.

It's not just that he played both ways -- at least until he injured his arm -- but did both with ravenous success. He hit .285/.361/.564 with 22 home runs and 61 RBIs in 367 plate appearances, and recorded a slugging percentage that would have ranked fourth in the American League if he'd accumulated enough plate appearances. In his 10 starts, he went 4-2 with a 3.31 ERA, 11 strikeouts per nine innings and a .203 average allowed. He combined big power at the plate with electric stuff on the mound. And, yes, he had more experience at a high level than the other candidates, but players from Japan are eligible for the award, so you shouldn't dismiss Ohtani for that reason.

Acuña, meanwhile, entered the season as the consensus top prospect in baseball and, like Ohtani, delivered on the hype, hitting .293/.366/.552 with 26 home runs in 111 games. Even though he didn't get called up until April 25 and then missed a month with a knee injury, he became just the seventh player to hit 25 home runs in a season before turning 21, joining Mel Ott, Frank Robinson, Tony Conigliaro, Al Kaline, Orlando Cepeda and Eddie Mathews. His .552 slugging percentage in his age-20 season was the sixth-best ever. The five in front of him: Ott, Alex Rodriguez, Ted Williams, Mike Trout and Robinson.

Ohtani and Acuña also did all this with flair, instantly becoming two of the most exciting players in the league. Two of my favorite moments of the season were Ohtani's first career home run when he received the silent treatment from his teammates and then Acuña's two-homer game to complete a stretch of eight home runs in eight games:

Looking back at what all these guys accomplished is fun, but the most exciting aspect of this group is what they might accomplish in the future. In fact, here's an almost impossible question to answer: How would you rank the six finalists in future value? Here's how I would do it:

You just saw that list of 20-year-old hitters who produced like he did -- we're talking inner circle Hall of Fame potential. While he primarily played left field for the Braves, he has the speed and athleticism to move to center if they didn't already have a three-time Gold Glover there in Ender Inciarte. The scary thing for the rest of the NL East is Acuña got better during the season, hitting .322/.403/.625 in the second half. If he does that over 150 games in 2019, he'll be the best player in the National League at 21 years old.

In some ways, you can argue that Soto's debut season was even more impressive than Acuña's as he hit .292/.406/.517 with 22 home runs in 116 games -- as a 19-year-old. Only Conigliaro hit more home runs as a teenager as Soto matched Bryce Harper's total. Soto didn't turn 20 until October and he performed at that level despite playing just 122 games in the minors -- only eight above Class A. Aside from hitting nearly .300 with power as a teenager, Soto had the sixth-highest walk rate in the majors (minimum 400 plate appearances). This kid already has an advanced understanding of hitting. I think it's very close between him and Acuña. Soto is the best bet to post Trout and Joey Votto-like on-base percentages; Acuña's two-way value gives him the slight advantage.

Torres finished third in the voting behind Ohtani and teammate Miguel Andújar, but his upside is off the charts. In his age-21 season, he hit .271/.340/.480 with 24 home runs in just 484 PAs, big power numbers for a middle infielder, especially one so young. He played primarily second base, but could see more action at shortstop in 2019 with Didi Gregorius missing a large chunk of the season after Tommy John surgery (a surgery Torres himself had in 2017). He made his first All-Star team in 2018; you can pencil him in for the next decade.

This isn't a knock on Ohtani's ability, but more an issue of how much playing both ways ultimately cuts into his overall value. While he showcased big power to center and left-center, I'm not completely convinced he's going to hit .313/.387/.656 against right-handed pitching again (he hit .222/.300/.354 against lefties). Then again, he was a 23-year-old in his first season in the majors and had been viewed as more talented on the mound. I wouldn't put any limits on him. I wonder if he eventually ends up as DH/closer, as opposed to a part-time DH/part-time starter.

We saw in the postseason that this kid has as good stuff as any starter in the majors, with an upper-90s fastball and six-pitch repertoire. How are you supposed to hit him? Well, batters really didn't hit him all that much. Among pitchers with at least 100 innings, he had the fourth-lowest OPS allowed, behind only Jacob deGrom, Chris Sale and Blake Snell. The Dodgers re-signed Clayton Kershaw, but if Buehler can remain healthy, he's the new staff ace.