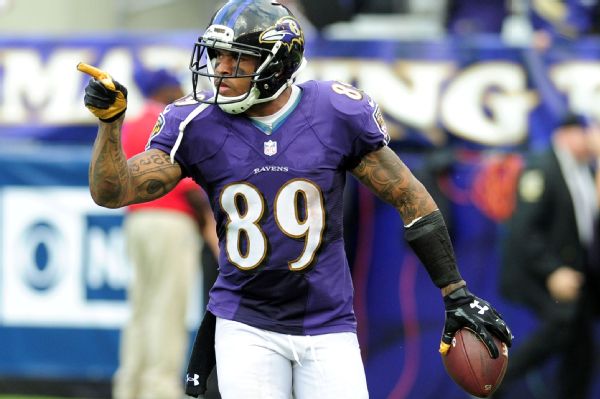 ESPN
By Jamison Hensley
OWINGS MILLS, Md. -- Baltimore Ravens wide receiver Steve Smith Sr.showed his frustration during Thursday's practice when he tossed his helmet and then kicked a football.

The outburst came in the first hour of practice, after Joe Flacco overthrew Smith on consecutive deep passes along the sideline. Smith ripped off his helmet and threw it about 15 yards toward the end zone. He then booted a football that was on the ground.

Smith walked to the corner of the indoor facility and sat by himself. Flacco and the rest of the offense never stopped, continuing the passing drills without Smith.

"The reason I did it is because I wanted to," Smith told ESPN.

Sitting in front of his locker, Smith looked at reports about his eruption at practice on his phone.

Smith, 37, is likely playing the final few games of his stellar career. He hasn't announced his retirement, but he has told coach John Harbaugh that this would be his final season.

After a tough 30-23 loss to the New England Patriots on Monday night, Smith talked about how he was trying to stay positive.

"A great philosopher -- Thumper's mom in 'Bambi' -- said if you don't have anything nice to say, don't say anything at all," Smith said Monday night. "I'm trying to do that."

It was an emotional Thursday for the Ravens, from Smith's outburst to Harbaugh's emotional talk to his players at the end of practice. Harbaugh could be heard telling his players to "leave it all out on the field Sunday."

"You have to understand, we're all a little messed up," linebacker Terrell Suggs said. "We're all a little itchy. It was an emotional loss [at New England]. We really wanted that one. We're just a little edgy. But I think it's good to be a little edgy in December."
Related topics:
sportsespnjoe flaccopracticesteve smith srnflbaltimore ravenstiradeoutburst
Copyright © 2020 ESPN Internet Ventures. All rights reserved.
More Videos
From CNN Newsource affiliates
TOP STORIES